University of Delaware biochemist Jeff Mugridge is trying to figure out how so-called mRNA eraser enzymes work in our cells, why those erasers can sometimes misbehave and lead to cancer, and how science can pave the way for possible solutions to this problem. 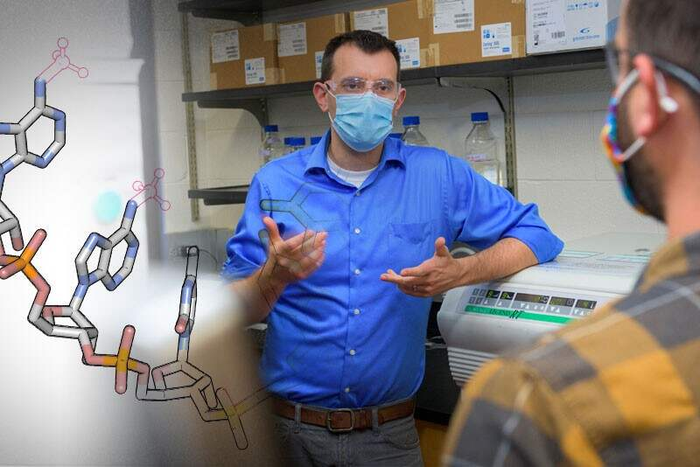 University of Delaware biochemist Jeff Mugridge is trying to figure out how so-called mRNA eraser enzymes work in our cells, why those erasers can sometimes misbehave and lead to cancer, and how science can pave the way for possible solutions to this problem.

Ribonucleic acid (RNA) is a single-stranded molecule that is copied from the DNA in our bodies. Messenger RNA (mRNA) molecules carry the instruction code that tells our cells how to do everything they need to survive, such as when, where and how to make proteins or enzymes.

One of the many ways the cells in our bodies control mRNA molecules is to decorate them with different chemical groups that either subtly or drastically change the way that messages are conveyed.

Mugridge, assistant professor of chemistry and biochemistry, was recently awarded $1,956,466 from the National Institutes of Health (NIH) to study specific enzymes that can act like erasers and remove critical chemical groups, called methyl groups, found on mRNA molecules.

With hard-to-treat cancers like glioblastoma, sometimes these methyl eraser enzymes are overexpressed in cancer cells — meaning too many eraser enzymes are working at once. This can cause mRNA molecules to lack important information, which can change the messages they deliver in a way that leads to cancer progression and tumor growth.

Little is known about how these eraser enzymes decide which methyl groups to eliminate or keep, how often they erase methyl groups in healthy cells or why they misbehave in some human diseases.

Along with two doctoral students working in his lab, Mugridge is specifically looking at a class of eraser enzymes called RNA demethylases. Demethylases remove methyl groups on RNA that play important roles in gene expression and the progression of cancers like glioblastoma or acute myeloid leukemia.

RNA methylation is a biochemical process that can act like a switch and turn certain activities on or off in our cells. It is known to be important for producing properly shaped RNA molecules, synthesizing proteins and determining the lifespan of RNA molecules in the cell, among other things. Methyl modifications on mRNA also play a role in cell fate decisions and the way embryonic stem cells are differentiated during development.

Scientists have recently identified a few RNA methyl modification erasers, which has raised the intriguing possibility that these methyl groups can be both written and erased from an mRNA transcript, Mugridge said. But how these eraser enzymes recognize and choose which specific methyl groups to remove out of the thousands that are found on RNA, and how frequently they do this, remains poorly understood.

Does it happen all the time, or is it a rare event? Does it only happen in disease or in specific cell types? These are some of the questions Mugridge and his team plan to answer. The research team also will explore how proteins and other cofactors, such as vitamin C, regulate demethylase activity in the cell.

“Long-term, if we have a high-resolution picture of how these demethylase enzymes work, then we can begin to understand how each eraser is linked to different human diseases and disease progression,” said Mugridge. “This will give us better information about which of these enzymes to target for inhibition and how, for example, to slow down tumor progression in cancer.”

For instance, in glioblastoma an eraser enzyme known as FTO is overexpressed, meaning the glioblastoma cells make much more of it compared to normal cells. This leads to a lot of methyl-erasing activity on RNA in those cancer cells, which seems to be important for cancer progression. Research has shown that when FTO is inhibited with a drug, it slows down cancer progression in glioblastoma. However, therapeutics that can selectively and effectively target RNA demethylase enzymes to treat cancers have eluded scientists.

If Mugridge and his team can figure out the molecular details of how these demethylase enzymes work and how the cell controls their functions, they could look for ways to manipulate which methyl groups get erased from RNA and pave the way for therapeutics that help correct misbehaving eraser enzymes in disease.

“If we understood how the RNA molecule binds, exactly where it binds on the protein surface and how it interacts with specific amino acids that make up the protein, we might be able to fill in the missing pieces of the puzzle and then develop tools to monitor or influence this erasing activity in cells,” he said.

Searching for clues in the smallest details

In Brown Laboratory, Mugridge and his students produce proteins in bacterial cells and then purify and isolate the specific RNA demethylases of interest. Brittany Shimanski, a doctoral student from the Chemistry-Biology Interface program, is using these purified enzymes to conduct biochemistry and structural biology studies to better understand how the eraser enzymes function and select their targets.

Mugridge explained that if the team can grow crystals of the proteins in complex with the modified RNA groups that they act on, they can take them to a national lab and shoot them with high-intensity X-rays to get 3D images of the enzyme’s shape, including information about where all the atoms are located and how the enzymes bind to the methylated RNA that they are going to erase.

This atomic-scale structural biology information can provide critical insights into how an enzyme works and will also inform doctoral student Luke Calzini’s work to understand how these eraser enzymes are controlled by different proteins or small-molecule co-factors, such as vitamin C, that can change their activity or selectivity.

The work could give scientists new ways to ask specific questions in cells, too.

“We feel like we’re working on an important problem that could be significant for understanding how different diseases work and how they are impacted by changes in RNA methylation,” said Mugridge.