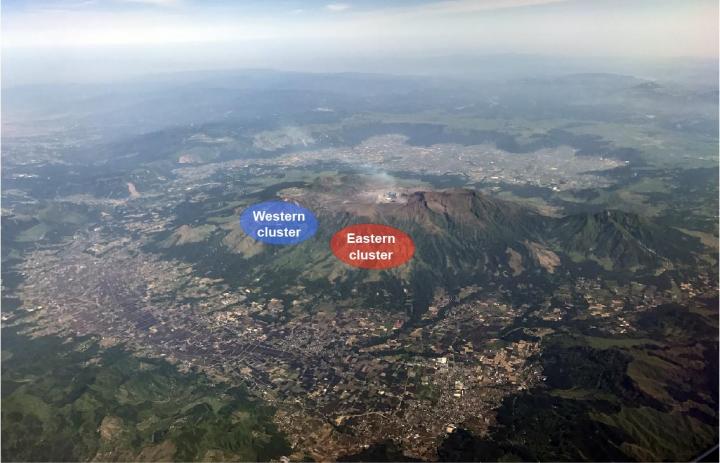 Mount Aso in Kyushu, Japan, is one of the largest active volcanoes in the world and has experienced major earthquakes and eruptions as recently as 2016. Researchers at Kyushu University’s International Institute for Carbon-Neutral Energy Research (I2CNER) have been investigating the relationships among these events to better understand what are happening under the surface and to help predict future disasters. In particular, for a new study published in Geophysical Research Letters, they investigated “very long period” (VLP) seismic waves, which can represent pressure changes in subsurface hydrothermal systems.

“We analyzed continuous VLP seismicity data recorded from January 2015 to December 2016, a period that includes both large earthquakes and eruptions of Mount Aso,” explains lead author of the study Andri Hendriyana. “Using on this dataset, we developed a differential-time back-projection method to accurately locate VLP events, and detected over 18,000 reliable VLP events.”

Using this method, two distinct clusters of these seismic events were identified in the subsurface below the caldera of Mount Aso. For most of the observation period, VLP activity was almost entirely confined to the eastern cluster. However, after the Kumamoto earthquakes on April 2016, VLP activity abruptly shifted to the western cluster for about five months. Then, in September 2016, one month before the largest eruption of Mount Aso during the study period, VLP events migrated back to the eastern cluster. After the large eruption on October 8, 2016, VLP seismicity stopped temporarily. Together, these observations show that VLP events are affected by the occurrence of earthquakes and are related to volcanic eruptions. VLP seismicity is considered to be directly related to pressure variations associated with magmatic activity.

“We interpret the migration of VLP activity after the earthquakes as a response to permeability enhancement or to fractures opening because of extension associated with the Kumamoto earthquakes,” says senior author Takeshi Tsuji. He expects this method to be applied in further studies of Mount Aso as well as other volcanoes worldwide.

“The information obtained from this new monitoring approach could reveal new details about the dynamic behavior within Aso and other volcanoes after earthquakes, and could provide important information for prevention and mitigation of future disasters.”

The article, “Migration of very long period seismicity at Aso volcano, Japan, associated with the 2016 Kumamoto earthquake,” was published in Geophysical Research Letters at DOI:10.1029/2019GL082645.

Scienmag May 7, 2019
Credit: ITP The Tibetan Plateau, as Earth's "Third Pole," was reported to be first occupied by modern humans…