Under the scanner: GIST scientists unravel the inner workings of DNA repair enzymes

DNA is the instruction manual for every living organism, guiding the development and functioning of all biological processes. In essence, it is a molecule with a double helix structure with each unit of a helix containing what are known as “DNA bases”. 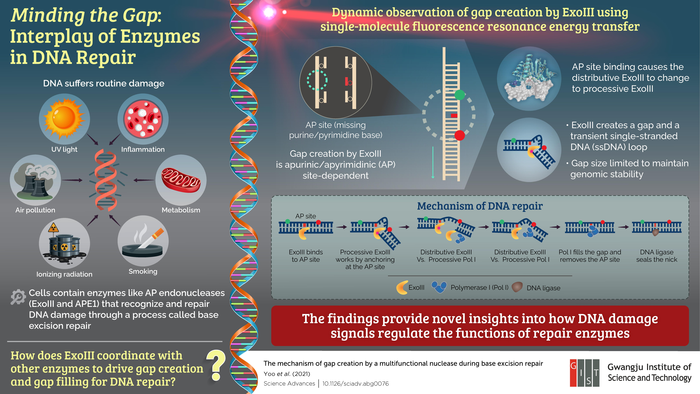 DNA is the instruction manual for every living organism, guiding the development and functioning of all biological processes. In essence, it is a molecule with a double helix structure with each unit of a helix containing what are known as “DNA bases”.

Maintenance of DNA is extremely important for smooth operation of all bodily functions. DNA may be damaged by cellular metabolism by-products, such as reactive oxygen species, and ionizing radiation (UV and gamma rays). In such a scenario, a set of enzymes (proteins that act as catalysts for biochemical reactions) are activated to repair the damage. The sequence of processes undertaken by the enzymes to fix DNA damage is known as “base excision repair” (BER).

BER is mainly carried out by the Exonuclease III (ExoIII) and Polymerase I (Pol I) enzymes. Despite the importance of the functions of these enzymes, the mechanism underlying their coordination has not been elucidated in previous studies.

Now, scientists led by Dr. Gwangrog Lee from the Gwangju Institute of Science and Technology (GIST) in Korea have utilized the latest technology in single molecule detection to study enzymatic interactions and observe the mechanism of BER, filling the gap in our understanding of this coordination mechanism.

In their paper published in Science Advances, the scientists reported that ExoIII has an affinity for apurinic/apyrimidinic (AP) sites—spots on the DNA double helix where a DNA base is missing—in damaged DNA. It attaches itself to the AP site in damaged DNA and cleaves the double strand of DNA into a single strand by digesting a selective number of bases from the other strand. Because ExoIII is highly responsive to salt concentration, the number of bases digested and the resulting gap size depends on the physiological salt conditions. Thereafter, Pol I attaches itself to the 3’ (3 prime end) of the digested DNA strand and fills the gap.

Dr. Lee highlights the crux of the study, saying, “Interestingly, there is perfect temporal and spatial regulation between the gap creation activity of ExoIII and the gap filling activity of Pol I, such that genomic stability is always maintained.”

Understanding the role of ExoIII in BER has opened several doors for future research. For instance, the expression of AP endonucleases in cancer cells is significantly higher than in normal cells, allowing AP endonucleases (e.g., ExoIII and APE1) to be used as a biomarker for cancer diagnosis. “This study provides insights for investigation of operational mechanisms of other enzymes involved in DNA repair. Further research in this area could lead to technologies for targeted gene repair and drug development,” concludes Dr. Lee.

The Gwangju Institute of Science and Technology (GIST) is a research-oriented university situated in Gwangju, South Korea. As one of the most prestigious schools in South Korea, it was founded in 1993. The university aims to create a strong research environment to spur advancements in science and technology and to promote collaboration between foreign and domestic research programs. With its motto, “A Proud Creator of Future Science and Technology,” the university has consistently received one of the highest university rankings in Korea.