Uncovering the mechanism of our oldest anesthetic 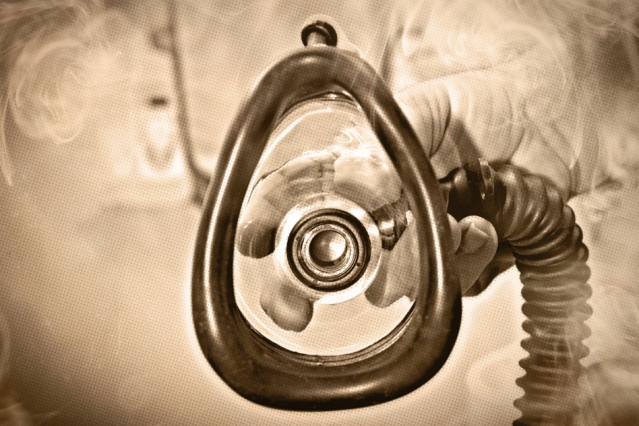 Nitrous oxide, commonly known as “laughing gas,” has been used in anesthesiology practice since the 1800s, but the way it works to create altered states is not well understood. In a study published this week in Clinical Neurophysiology, MIT researchers reveal some key brainwave changes among patients receiving the drug.

For a period of about three minutes after the administration of nitrous oxide at anesthetic doses, electroencephalogram (EEG) recordings show large-amplitude slow-delta waves, a powerful pattern of electrical firing that sweeps across the front of the brain as slowly as once every 10 seconds.

This frequency is characteristic of our deepest sleep, but the waves induced by nitrous oxide are twice as large as — and seemingly more powerful than — the ones seen in slumber. “We literally watched it and marveled, because it was totally unexpected,” says Emery Brown, the Edward Hood Taplin Professor of Medical Engineering at MIT and an anesthesiologist at Massachusetts General Hospital (MGH). “Nitrous oxide has control over the brain in ways no other drug does.”

Brown was joined in the research by co-authors Kara Pavone, Oluwaseun Akeju, Aaron Sampson, Kelly Ling, and Patrick Purdon, all of MGH.

The discovery came after Brown began recording EEG readings from all of his anesthesiology patients, starting in 2012. A sticker with six electrodes is placed on the forehead to measure voltage fluctuations resulting from the collective effect of neurons communicating in the brain. This EEG signal feeds into a computer that records it and displays the data as waves on a monitor in the operating room. The technique is safe and noninvasive.

When family doctors explain anesthesia, they sometimes describe it as “putting a patient to sleep,” using the metaphor of our closest experiential comparison. But sleep is nothing like anesthesia; it is a natural physiological state of decreased arousal during which the brain cycles naturally between rapid eye movement (REM) and non-REM states approximately every 90 minutes. Someone can easily be awakened from even the deepest stages of sleep.

Anesthesia, by comparison, is a drug-induced, reversible coma during which a patient is unconscious, cannot remember, feels no pain, and does not move — yet is physiologically stable. This state of coma remains as long as the flow of drugs is maintained, and patients awake from anesthesia with the sensation that no time has passed.

Brown says that anesthesiologists should use an EEG to monitor the brain states of their patients under anesthesia — which could make better anesthetic dosing decisions possible and alleviate concerns about awareness under anesthesia. “It’s hard to imagine that in 2015 you can just anecdotally observe this,” Brown says.

He speculates that if the pure, powerful slow waves produced by nitrous oxide could somehow be maintained at a steady state — as opposed to disappearing in mere minutes — then nitrous oxide might be used as a potent anesthetic from which rapid recovery would be possible.

It remains a mystery why these large, slow waves only continue for around three minutes, despite continuous administration of nitrous oxide. Brown says there appears to be a sort of rapid habituation or desensitization process at work.

He postulates that nitrous oxide may block signals from the brainstem that would otherwise maintain wakefulness. When certain receptors in the thalamus and cortex are not bound by nitrous oxide, these brain regions normally receive excitatory signals from arousal centers lower in the brain. Without those signals, loss of consciousness occurs, marked by slow waves. “If you see slow EEG oscillations, think of something having happened to the brainstem,” Brown says.

“It is worth pointing out that nitrous oxide has been shown previously to affect these low-frequency oscillations, but by causing a decrease rather than an increase,” says neurobiologist David Liley of Swinburne University of Technology in Australia, who was not involved in the research.

Previous research has largely explored lower doses of nitrous oxide — levels at which it is considered a sedative, inducing faster beta oscillations in the brain, which are indicative of relaxation but not loss of consciousness. “The nice thing about Emery’s study is that they could use high concentrations at high flow rates, which if used alone in healthy, initially conscious volunteers would cause way too much nausea and vomiting,” Liley says.

Brown and his team are now systematically studying the EEG signatures and behavioral effects of all of the principal anesthetics and anesthetic combinations.