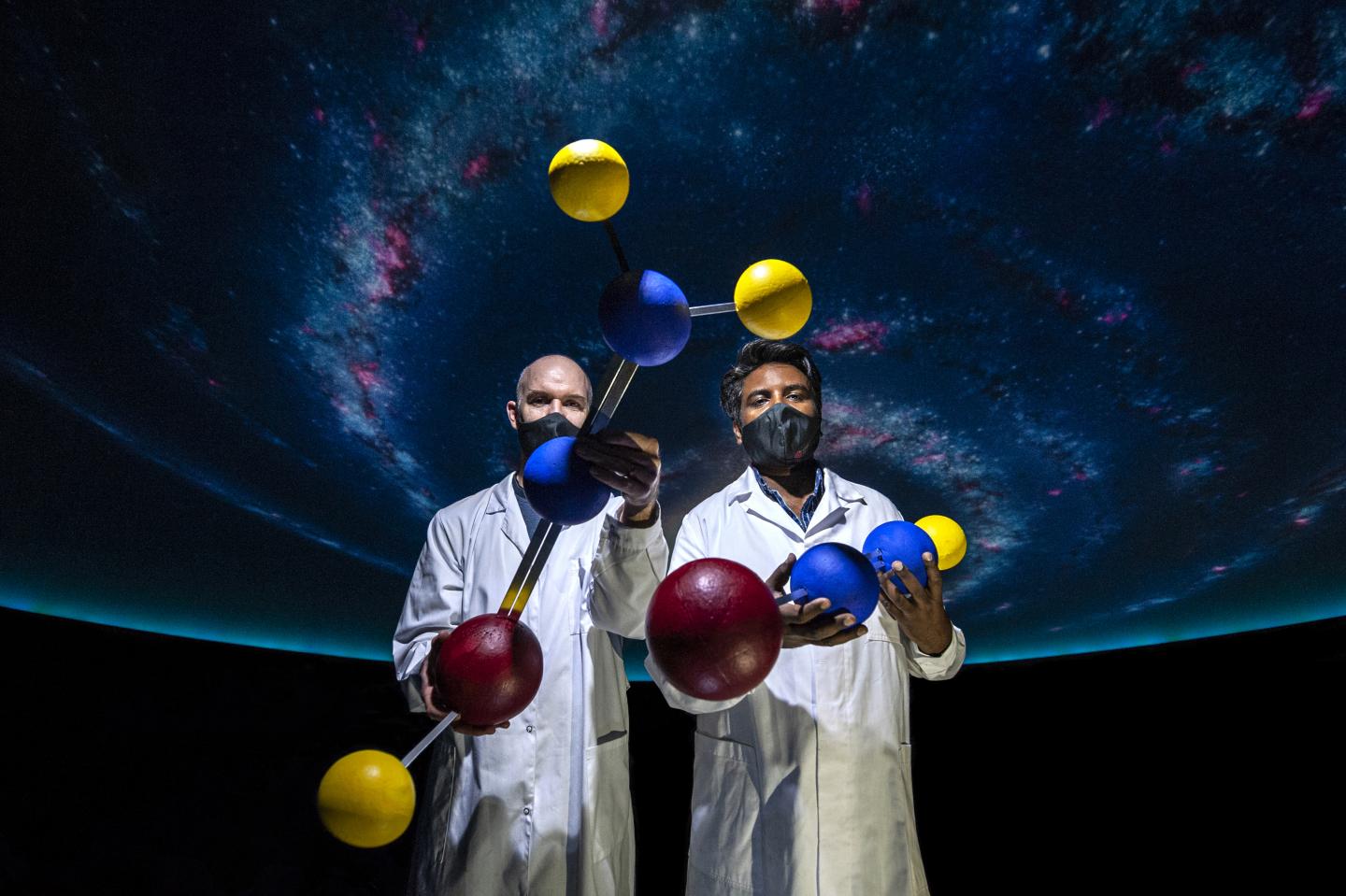 Looking at the night sky, one’s thoughts might be drawn to astrochemistry. What molecules inhabit the vast spaces between the stars? Would we see the same molecules that surround us here on Earth? Or would some of them be more exotic–something rarely observed or even unknown?

Recent research by a multinational team led by Prof. Robert Ko?os from the Institute of Physical Chemistry of the Polish Academy of Sciences has revealed an unusual molecule obtained and detected for the first time in laboratory conditions and also paved a smooth path to produce and further study another. Now that they can be seen and studied, they may prove worthy of wider astrochemical interest. Let’s get a closer look at this scientific development.

Interstellar clouds – where the story begins…

The medium permeating the space between stars is mainly filled with hydrogen, helium, and cosmic dust. However, average distances between atoms or molecules in these interstellar clouds are so vast that entire days may pass before they collide. In the vacuum of space, the passage of time and the impact of radiation are crucial factors for the development of more advanced chemical compounds.

As the physical conditions found in interstellar clouds are drastically different from those on our planet, the detection of some of the chemical compounds found in them requires advanced studies on Earth. As part of this, scientists create molecules which are normally unstable under Earth conditions and then conduct research on their properties. They discover them on Earth first so that we can more easily detect them in space. Sounds interesting, but how does it look in practice?

Jupiter and Saturn have been in the spotlight in our own solar system for more than two decades due to the detection of phosphine (PH3), ammonia’s analog, in their atmospheres. In 2020, all eyes shifted towards Venus following claims that PH3 had been found in its atmosphere as well. The appearance of phosphine in an astronomical object is momentous because of its tremendous importance for living organisms. Molecules containing phosphorus are crucial for enzymatic processes which are responsible for the formation of the structural materials of our skeletons, nucleic acids like DNA and RNA, and even energy transport in all living cells. Although it is the 6th most abundant element in Earth’s biomass and the 12th most abundant on the planet overall, it is a billion times less abundant in the interstellar medium. Due to their rarity, detecting P-containing molecules in interstellar clouds continues to intrigue scientists.

We know very little about the behavior and existence of P-containing molecules in extreme interstellar conditions. Only a few have been found and are limited to PN, CP, PO, HCP, CCP, PH3, and NCCP. Of these only PO and PN have been detected in molecular clouds. It is possible that the low abundance of reactants containing phosphorus in such media makes the formation of larger molecules quite rare and difficult to detect. We also need to characterize a wider variety of P-containing chemicals so that our search may be expanded to include a larger selection of appropriate targets. The search for new molecules is challenging since many known and promising P-containing species are unstable under typical laboratory conditions.

“We use ultraviolet to dehydrogenate phosphorus containing organic molecules to produce exotic phosphorus species. We were able to produce triplet HCCP which is a molecule of astrochemical importance. The trick to detecting it lies in using the environment of a frozen inert gas.” – remarks Dr. Lawzer.

The experiments performed as part of the project, and relevant theoretical studies show that the molecule has a linear shape and peculiar chemical bonding. Prof. Ko?os comments: “You may have heard in your school days that phosphorus was either 3- or 5-valent in its chemical compounds. Well, here it is monovalent, sporting a single bond to carbon. This is pretty unusual indeed.”

The researchers also confirmed the existence of CH2=C=PH (phosphaallene), a molecule never observed before. It was formed along the route leading from CH3CP (the precursor species) to HCCP.

Experiments backed by quantum chemical computations, recently reported in Angewandte Chemie, have proven what was once but a theoretical construct. “If you asked a regular chemist, some of the most prominent species of the astrochemical menagerie would likely be ridiculed as mere molecular fragments rather than genuine molecules” – admits Prof. Ko?os.

The laboratory characterization of exotic compounds like HCCP and CH2=C=PH marks an important step towards their extraterrestrial detection. And such detections would greatly advance our knowledge concerning the astrochemistry of phosphorus. This should inspire even more scientists to look towards the stars above…