Researchers at the University of California San Diego and the Salk Institute for Biological Studies have developed a tiny neural probe that can be implanted for longer time periods to record and stimulate neural activity, while minimizing injury to the surrounding tissue. 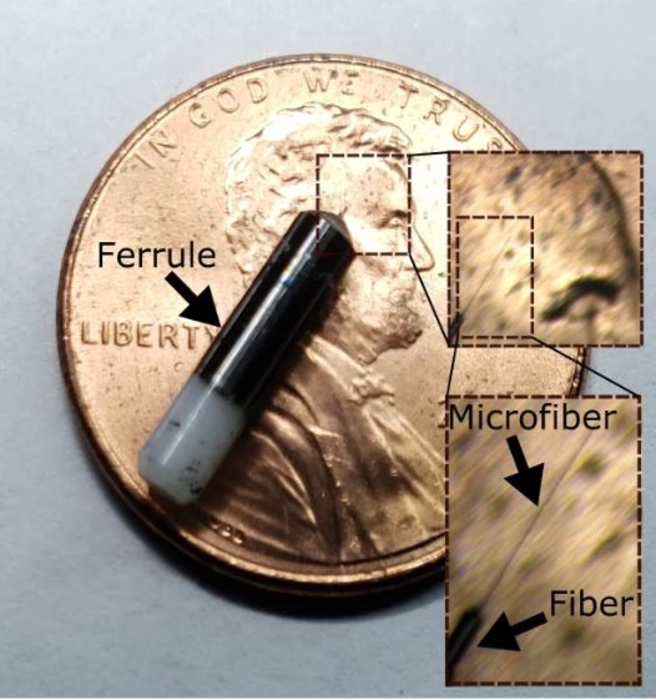 Researchers at the University of California San Diego and the Salk Institute for Biological Studies have developed a tiny neural probe that can be implanted for longer time periods to record and stimulate neural activity, while minimizing injury to the surrounding tissue.

The new neural probe, detailed in a paper published June 7 in Nature Communications, is extremely thin—about one-fifth the width of a human hair—and flexible. The team says that this type of neural probe would be ideal for studying small and dynamic areas of the nervous system like peripheral nerves or the spinal cord.

“This is where you’d need a really small, flexible probe that can fit in between vertebrae to interface with neurons and can bend as the spinal cord moves,” said Axel Nimmerjahn, associate professor at the Salk Institute and co-senior author of the study.

These features also make it more compatible with biological tissue and less prone to triggering an immune response, which in turn make it suitable for long-term use.

“For chronic neural interfacing, you want a probe that’s stealthy, something that the body doesn’t even know is there but can still communicate with neurons,” said study co-senior author Donald Sirbuly, professor of nanoengineering at the UC San Diego Jacobs School of Engineering.

While there are other ultra-thin, flexible probes out there, what sets this small probe apart is that it can both record the electrical activity of neurons and stimulate specific sets of neurons using light.

“Having this dual modality—electrical recording and optical stimulation—in such a small footprint is a unique combination,” said Sirbuly.

The probe consists of an electrical channel and an optical channel. The electrical channel contains an ultra-thin polymer electrode. The optical channel contains an optical fiber that is also ultra-thin. Putting these two channels together required some clever engineering. The researchers needed to figure out how to insulate the channels to keep them from interfering with each other and have them both fit into a tiny probe measuring just 8 to 14 micrometers in diameter, all while making sure that the device was mechanically flexible, robust, biocompatible and able to perform on par with state-of-the-art neural probes. This involved finding the right combination of materials to build the probe and optimizing the fabrication of the electrical channel.

The team implanted the probes in the brains of live mice for up to one month. The probes caused hardly any inflammation in the brain tissue after prolonged implantation. As the mice moved about in a controlled environment, the probes were able to record electrical activity from neurons with high sensitivity. The probes were also used to target specific neuron types to produce certain physical responses. Using the probes’ optical channels, the researchers stimulated neurons in the cortex of the mice to move their whiskers.

These tests in brain tissue were done as a proof of concept. The team hopes to perform future studies in the spinal cord using their probe.

“Currently, we know relatively little about how the spinal cord works, how it processes information, and how its neural activity might be disrupted or impaired in certain disease conditions,” said Nimmerjahn. “It has been a technical challenge to record from this dynamic and tiny structure, and we think that our probes and future probe arrays have the unique potential to help us study the spinal cord—not just understand it on a fundamental level, but also have the ability to modulate its activity.”

UC San Diego and the Salk Institute have submitted a patent application on the neural probe technology described in this work.

This work was supported by the Defense Advanced Research Projects Agency (DARPA) Biological Technologies Office Electrical Prescriptions program (HR0011-16-2-0027), the UC San Diego Kavli Institute for Brain and Mind (2018-1492) and the National Institutes of Health (R01 NS108034, U19 NS112959, U01 NS103522, and P30 CA014195). This work was performed in part at the San Diego Nanotechnology Infrastructure (SDNI) at UC San Diego, a member of the National Nanotechnology Coordinated Infrastructure, which is supported by the National Science Foundation (grant ECCS-1542148).