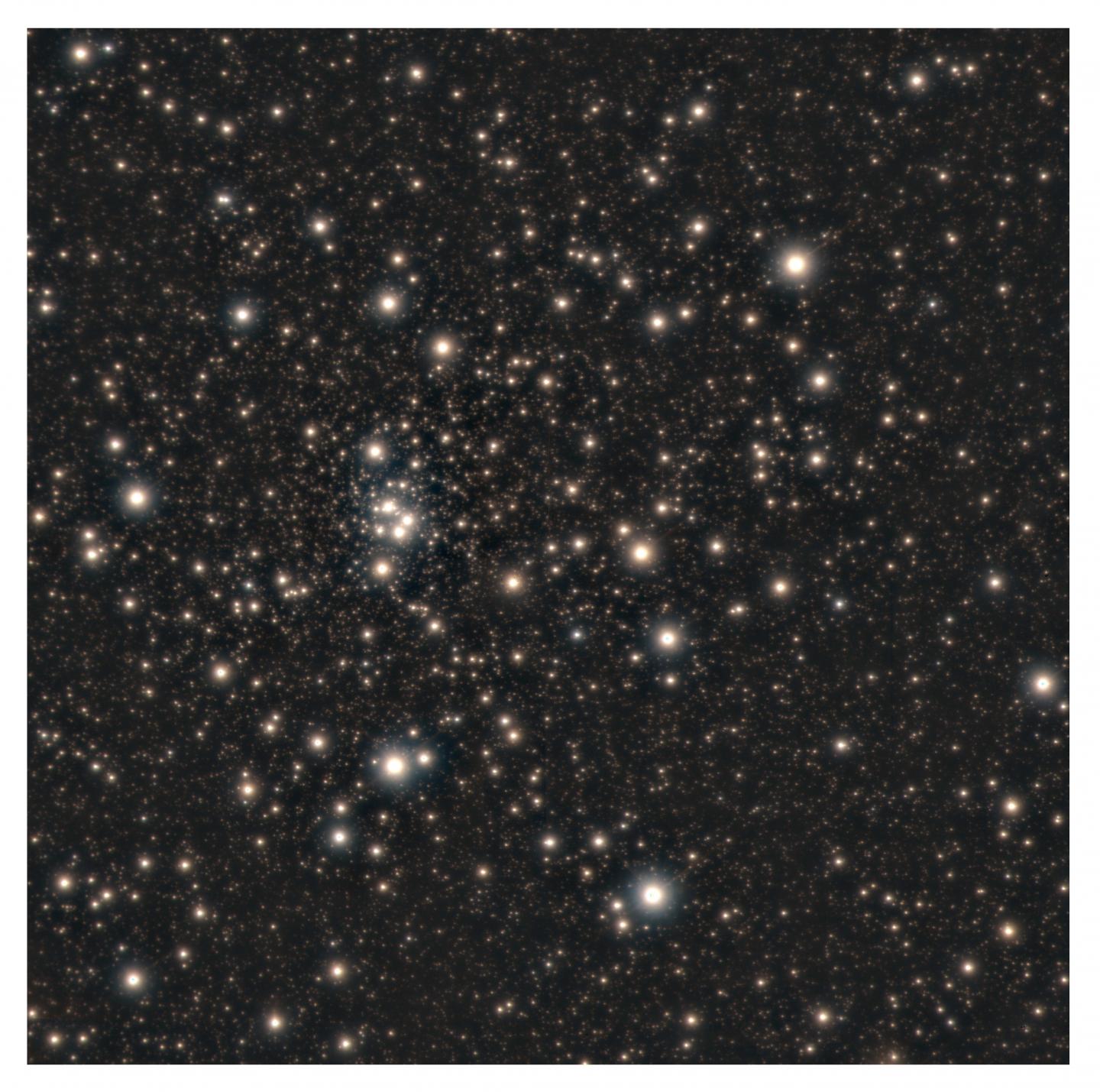 Using high-resolution adaptive optics imaging from the Gemini Observatory, astronomers have uncovered one of the oldest star clusters in the Milky Way Galaxy. The remarkably sharp image looks back into the early history of our Universe and sheds new insights on how our Galaxy formed.

Just as high-definition imaging is transforming home entertainment, it is also advancing the way astronomers study the Universe.

“Ultra-sharp adaptive optics images from the Gemini Observatory allowed us to determine the ages of some of the oldest stars in our Galaxy,” said Leandro Kerber of the Universidade de São Paulo and Universidade Estadual de Santa Cruz, Brazil. Kerber led a large international research team that published their results in the April 2019 issue of the Monthly Notices of the Royal Astronomical Society.

Using advanced adaptive optics technology at the Gemini South telescope in Chile, the researchers zoomed in on a cluster of stars known as HP 1. “Removing our atmosphere’s distortions to starlight with adaptive optics reveals tremendous details in the objects we study,” added Kerber. “Because we captured these stars in such great detail, we were able to determine their advanced age and piece together a very compelling story.”

That story begins just as the Universe was reaching its one-billionth birthday.

“This star cluster is like an ancient fossil buried deep in our Galaxy’s bulge, and now we’ve been able to date it to a far-off time when the Universe was very young,” said Stefano Souza, a PhD student at the Universidade de São Paulo, Brazil, who worked with Kerber as part of the research team. The team’s results date the cluster at about 12.8 billion years, making these stars among the oldest ever found in our Galaxy. “These are also some of the oldest stars we’ve seen anywhere,” added Souza.

“HP 1 is one of the surviving members of the fundamental building blocks that assembled our Galaxy’s inner bulge,” said Kerber. Until a few years ago, astronomers believed that the oldest globular star clusters — spherical swarms of up to a million stars — were only located in the outer parts of the Milky Way, while the younger ones resided in the innermost Galactic regions. However, Kerber’s study, as well as other recent work based on data from the Gemini Observatory and the Hubble Space Telescope (HST), have revealed that ancient star clusters are also found within the Galactic bulge and relatively close to the Galactic center.

Globular clusters tell us much about the formation and evolution of the Milky Way. Most of these ancient and massive stellar systems are thought to have coalesced out of the primordial gas cloud that later collapsed to form the spiral disk of our Galaxy, while others appear to be the cores of dwarf galaxies consumed by our Milky Way. Of the roughly 160 globular clusters known in our Galaxy, about a quarter are located within the greatly obscured and tightly packed central bulge region of the Milky Way. This spherical mass of stars some 10,000 light years across forms the central hub of the Milky Way (the yolk if you will) which is made primarily of old stars, gas, and dust. Among the clusters within the bulge, those that are the most metal-poor (lacking in heavier elements) – which includes HP 1 – have long been suspected of being the oldest. HP 1 then is pivotal, as it serves as an excellent tracer of our Galaxy’s early chemical evolution.

Kerber and his international team used the exquisitely deep high-resolution adaptive optics images from Gemini Observatory as well as archival optical images from the HST to identify faint cluster members, which are essential for age determination. With this rich data set they confirmed that HP 1 is a fossil relic born less than a billion years after the Big Bang, when the Universe was in its infancy.

“These results crown an effort of more than two decades with some of the world’s premier telescopes aimed at determining accurate chemical abundances with high-resolution spectroscopy,” said Beatriz Barbuy of the Universidade de São Paulo, coauthor of this paper and a world-renowned expert in this field. “These Gemini images are the best ground-based photometric data we have. They are at the same level of HST data, allowing us to recover a missing piece in our puzzle: the age of HP 1. From the existence of such old objects, we can attest to the short star formation timescale in the Galactic bulge, as well as its fast chemical enrichment.”

To determine the cluster’s distance, the team used archival ground-based data to identify 11 RR Lyrae variable stars (a type of “standard candle” used to measure cosmic distances) within HP 1. The observed brightness of these RR Lyrae stars indicate that HP 1 is at a distance of about 21,500 light years, placing it approximately 6,000 light years from the Galactic center, well within the Galaxy’s central bulge region.

Kerber and his team also used the Gemini data, as well HST, Very Large Telescope, and Gaia mission data, to refine the orbit of HP 1 within our Galaxy. This analysis shows that during HP 1’s history, the cluster came as close as about 400 light years from the Galactic center – less than one-tenth of its current distance.

“The combination of high angular resolution and near-infrared sensitivity makes GeMS/GSAOI an extremely powerful tool for studying these compact, highly dust-enshrouded stellar clusters,” added Mattia Libralato of the Space Telescope Science Institute, a coauthor on the study. “Careful characterization of these ancient systems, as we’ve done here, is paramount to refine our knowledge of our Galaxy’s formation.”

Chris Davis, Program Officer at the National Science Foundation (NSF) for Gemini, commented, “These fabulous results demonstrate why the development of wide-field, high-resolution imaging at Gemini is key to the Observatory’s future. The recent NSF award to support the development of a similar system at Gemini North will make routine super-sharp imaging from both hemispheres a reality. These are certainly exciting times for the Observatory.”

The Gemini observations resolve stars to about 0.1 arcsecond which is one 36 thousandths of a degree and comparable to separating two automobile headlamps from approximately 1,500 miles, or 2,500 kilometers, away (the distance from Manaus to Sao Paulo in Brazil, or from San Francisco to Dallas in the USA). This resolution was obtained using the Gemini South Adaptive Optics Imager (GSAOI) – a near-infrared adaptive optics camera used with the Gemini Multi-conjugate adaptive optics System (GeMS). GeMS is an advanced adaptive optics system utilizing three deformable mirrors to correct for distortions imparted on starlight by turbulence in layers of our atmosphere.

The Gemini Observatory is an international collaboration with two identical 8-meter telescopes. The Frederick C. Gillett Gemini Telescope is located on Mauna Kea, Hawai’i (Gemini North) and the other telescope on Cerro Pachón in central Chile (Gemini South); together the twin telescopes provide full coverage over both hemispheres of the sky. The telescopes incorporate technologies that allow large, relatively thin mirrors, under active control, to collect and focus both visible and infrared radiation from space.

The Gemini Observatory provides the astronomical communities in five participant countries with state-of-the-art astronomical facilities that allocate observing time in proportion to each country’s contribution. In addition to financial support, each country also contributes significant scientific and technical resources. The national research agencies that form the Gemini partnership include: the US National Science Foundation (NSF), the Canadian National Research Council (NRC), the Chilean Comisión Nacional de Investigación Cientifica y Tecnológica (CONICYT), the Brazilian Ministério da Ciência, the Argentinean Ministerio de Ciencia, Tecnología e Innovación Productiva, Tecnologia e Inovação and the Korea Astronomy and Space Institute (KASI). The observatory is managed by the Association of Universities for Research in Astronomy, Inc. (AURA) under a cooperative agreement with the NSF. The NSF also serves as the executive agency for the international partnership.

How the brain ‘mentalizes’ cooperation

Exploring the brain in a new way: WVU researcher records neurons to…