UCI scientists turn a hydrogen molecule into a quantum sensor

Irvine, Calif., April 22, 2022 — Physicists at the University of California, Irvine have demonstrated the use of a hydrogen molecule as a quantum sensor in a terahertz laser-equipped scanning tunneling microscope, a technique that can measure the chemical properties of materials at unprecedented time and spatial resolutions. 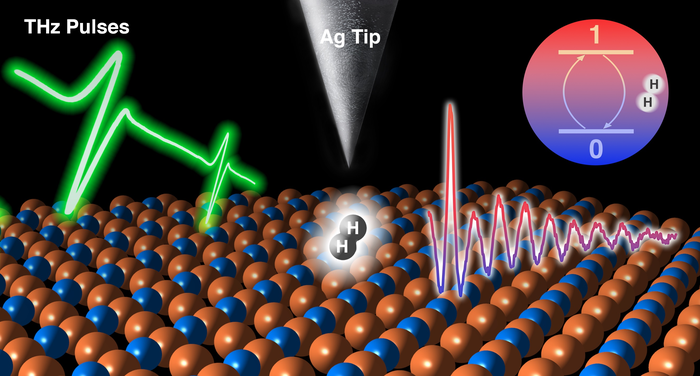 Irvine, Calif., April 22, 2022 — Physicists at the University of California, Irvine have demonstrated the use of a hydrogen molecule as a quantum sensor in a terahertz laser-equipped scanning tunneling microscope, a technique that can measure the chemical properties of materials at unprecedented time and spatial resolutions.

This new technique can also be applied to analysis of two-dimensional materials which have the potential to play a role in advanced energy systems, electronics and quantum computers.

Today in Science, the researchers in UCI’s Department of Physics & Astronomy and Department of Chemistry describe how they positioned two bound atoms of hydrogen in between the silver tip of the STM and a sample composed of a flat copper surface arrayed with small islands of copper nitride. With pulses of the laser lasting trillionths of a second, the scientists were able to excite the hydrogen molecule and detect changes in its quantum states at cryogenic temperatures and in the ultrahigh vacuum environment of the instrument, rendering atomic-scale, time-lapsed images of the sample.

“This project represents an advance in both the measurement technique and the scientific question the approach allowed us to explore,” said co-author Wilson Ho, Bren Professor of physics & astronomy and chemistry. “A quantum microscope that relies on probing the coherent superposition of states in a two-level system is much more sensitive than existing instruments that are not based on this quantum physics principle.”

Ho said the hydrogen molecule is an example of a two-level system because its orientation shifts between two positions, up and down and slightly horizontally tilted. Through a laser pulse, the scientists can coax the system to go from a ground state to an excited state in a cyclical fashion resulting in a superposition of the two states. The duration of the cyclic oscillations is vanishingly brief – lasting mere tens of picoseconds – but by measuring this “decoherence time” and the cyclic periods the scientists were able to see how the hydrogen molecule was interacting with its environment.

“The hydrogen molecule became part of the quantum microscope in the sense that wherever the microscope scanned, the hydrogen was there in between the tip and the sample,” said Ho. “It makes for an extremely sensitive probe, allowing us to see variations down to 0.1 angstrom. At this resolution, we could see how the charge distributions change on the sample.”

The space between the STM tip and the sample is almost unimaginably small, about six angstroms or 0.6 nanometers. The STM that Ho and his team assembled is equipped to detect minute electrical current flowing in this space and produce spectroscopic readings proving the presence of the hydrogen molecule and sample elements. Ho said this experiment represents the first demonstration of a chemically sensitive spectroscopy based on terahertz-induced rectification current through a single molecule.

The ability to characterize materials at this level of detail based on hydrogen’s quantum coherence can be of great use in the science and engineering of catalysts, since their functioning often depends on surface imperfections at the scale of single atoms, according to Ho.

“As long as hydrogen can be adsorbed onto a material, in principle, you can use hydrogen as a sensor to characterize the material itself through observations of their electrostatic field distribution,” said study lead author Likun Wang, UCI graduate student in physics & astronomy.

Joining Ho and Wang on this project, which was supported by the U.S. Department of Energy Office of Basic Energy Sciences, was Yunpeng Xia, UCI graduate student in physics & astronomy.

About the University of California, Irvine: Founded in 1965, UCI is the youngest member of the prestigious Association of American Universities and is ranked among the nation’s top 10 public universities by U.S. News & World Report. The campus has produced five Nobel laureates and is known for its academic achievement, premier research, innovation and anteater mascot. Led by Chancellor Howard Gillman, UCI has more than 36,000 students and offers 224 degree programs. It’s located in one of the world’s safest and most economically vibrant communities and is Orange County’s second-largest employer, contributing $7 billion annually to the local economy and $8 billion statewide. For more on UCI, visit www.uci.edu.