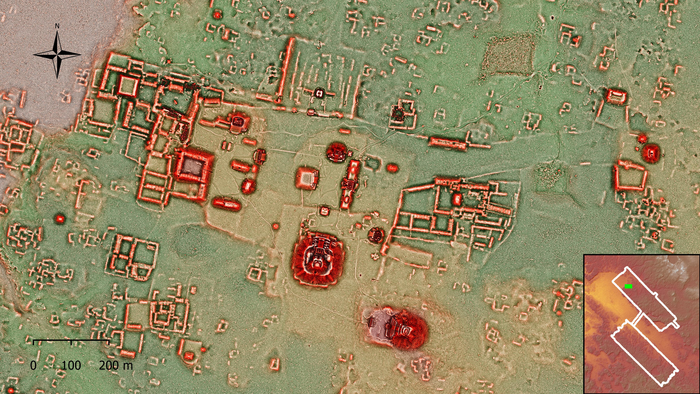 “By using lidar imagery, we are now able to fully understand the immense size of the Calakmul urban settlement and its substantial landscape modifications, which supported an intensive agricultural system. All available land was covered with water canals, terraces, walls and dams, no doubt to provide food and water security for Calakmul residents,” says Kathryn Reese-Taylor, professor, department of Anthropology and Archaeology, UCalgary.

Located in the Calakmul bioreserve, a UNESCO Mixed World Heritage site since 2002 and 2014, the site of Calakmul was the new capital of the powerful Kanu’l (Snake) dynasty from ca. 635 to 850 CE. The Kanu’l regime dominated geopolitics of the Maya lowlands, controlling a vast network of vassal kingdoms. Yet despite our knowledge of Calakmul’s far-reaching hegemony in the Maya region, to-date, researchers were uncertain of the extent of the urban settlement and landscape modifications in the capital city itself. This changed with the lidar survey. Funded by a grant from the Social Sciences and Humanities Research Council of Canada to Dr. Reese-Taylor and Lic. Adriana Velazquez Morlet, director, INAH, Campeche, and with authorization from the INAH Archaeology Council and carried out by the National Center for Airborne Laser Mapping (NCALM) at the University of Houston and Aerotecnología Digital S.A. de C.V. of Pachuca, Mexico, the lidar survey covered 95 km2 and revealed the dense and complex urban sprawl that lies beneath the Calakmul forest canopy.

Although the number of people who lived at Calakmul during the height of the Snake king’s rule was not a complete surprise because of previous mapping and archaeological investigations by the Autonomous University of Campeche and INAH, the team was astonished at the scale and degree of urban construction. Immense apartment-style residential compounds have been identified throughout the surveyed area, some with as many as 60 individual structures – the seats of large households composed of extended families and affiliated members. These large residential units were clustered around numerous temples, shrines and possible marketplaces, making Calakmul one of the largest cities in the Americas at 700 AD. Researchers were also able to see that the magnitude of landscape modification equaled the scale of the urban population. All available land was covered with water canals, terraces, walls, and dams, no doubt to provide maximum food and water security for the city dwellers.

Going forward, the lidar survey will be used by INAH to help with policy and planning for the Biosphere in anticipation of the expected increased tourism in the area. Lidar will also continue to support the Bajo Laberinto Archaeological Project which aims to investigate the causes for the rapid population increase at Calakmul and its effect on the region’s environment. Directed by Dr. Reese-Taylor, Armando Anaya Hernández, Universidad Autónoma de Campeche, and Felix A. Kupprat, Universidad Nacional Autónoma de México, with the collaboration of Dr. Nicholas Dunning, University of Cincinnati, the Bajo Laberinto Archaeological Project initiated its first season of research at Calakmul in 2022 and focused on documenting the newly discovered settlement and excavating significant water management features within the city.

Reese-Taylor and her colleagues on the Bajo Laberinto Archaeological Project will present their preliminary findings from the lidar survey on the INAH TV YouTube channel, on Tuesday, October 25 at 5 p.m. MT.

UCalgary is Canada’s entrepreneurial university, located in Canada’s most enterprising city. It is a top-five research university and one of the highest-ranked universities of its age. Founded in 1966, its 35,000 students experience an innovative learning environment, made rich by research, hands-on experiences and entrepreneurial thinking. It is Canada’s leader in the creation of start-ups. Start something today at the University of Calgary.

For more information, visit ucalgary.ca. Stay up to date with UCalgary news headlines on Twitter @UCalgary. For access to UCalgary news releases, images and b-roll, and details on faculties and how to reach experts, check out our newsroom at ucalgary.ca/newsroom.