Growth factor-mimicking antibodies capable of inducing tissue repair in the body to be developed into regenerative medicine treatments by AntlerA, a new Toronto startup 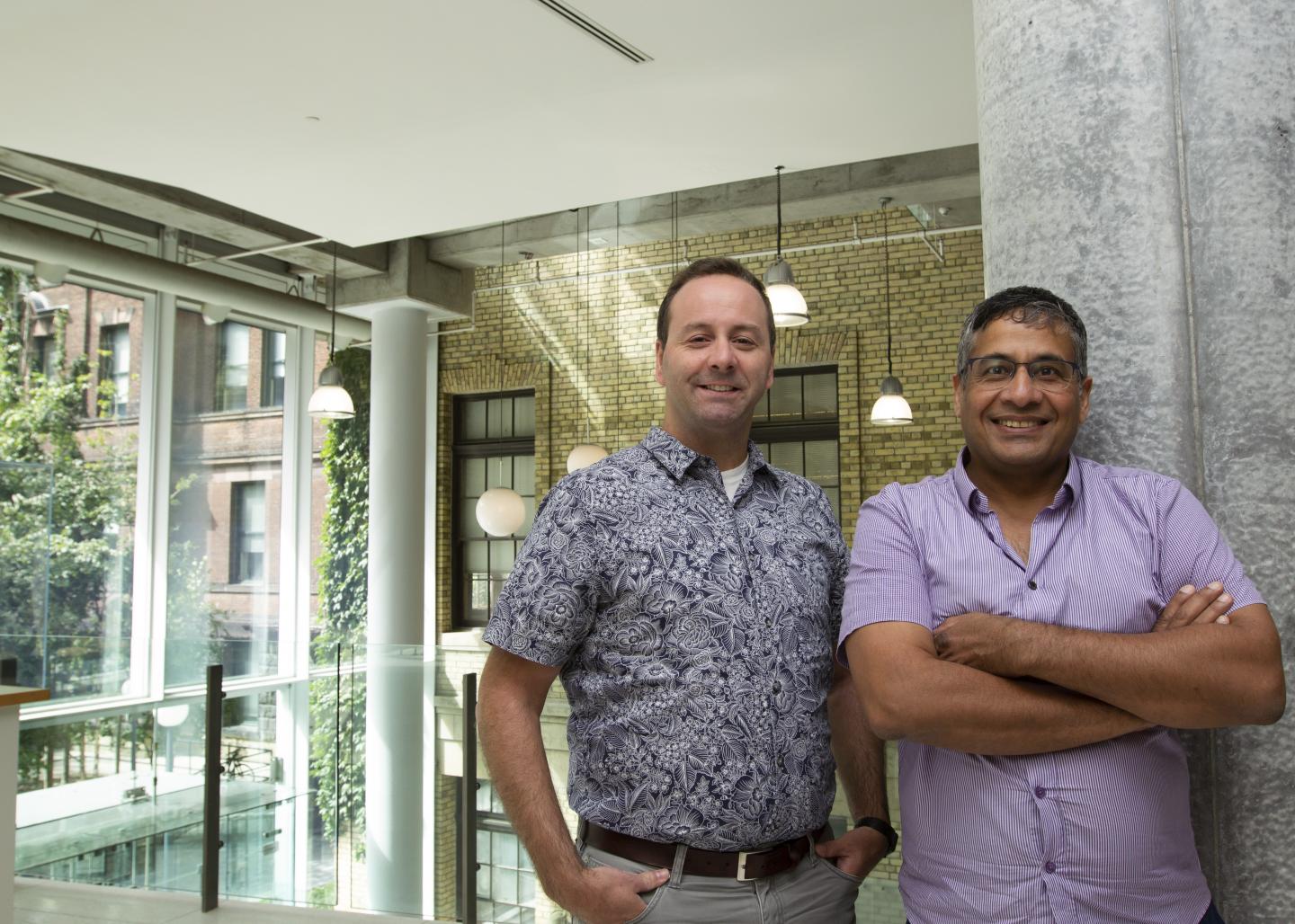 Our body makes antibodies to fight infections. But the synthetic versions of these molecules could hold the key to stimulating the body’s ability to regenerate.

The findings come from a decade-long collaboration between the teams of Sachdev Sidhu, a professor in the Donnelly Centre for Cellular and Biomolecular Research, and Stephane Angers, Associate Dean of Research in the Leslie Dan Faculty of Pharmacy, that have been creating synthetic antibodies for diverse applications.

Antibodies are increasingly being developed into drugs thanks to their ability to bind and affect the function of other proteins in cells. Because they are encoded by genes, antibodies can be created in the lab using genome and protein engineering technologies.

Now Sidhu and Angers’ teams have created antibodies that could one day stimulate tissue in the body to repair itself, as described in a study published online in eLife, an open-access journal. A newly launched Toronto startup, AntlerA Therapeutics, will turn the antibodies into drug-like molecules for regenerative medicine.

The work was done in collaboration with the Toronto Recombinant Antibody Centre, co-founded by Sidhu in the Donnelly Centre, which has created a massive catalog of synthetic antibodies for research and drug discovery.

“We are developing new molecules that have never been seen before and whose potential for regenerative medicine is enormous,” says Sidhu, also a professor in U of T’s Department of Molecular Genetics and co-founder of AntlerA.

“By capitalizing on the momentum of stem cells research and regenerative medicine that already exists in Toronto, we are ideally situated to commercialize these molecules.”

Both Sidhu and Angers are members of the recently launched Precision Medicine Initiative (PRiME) at U of T that seeks to accelerate treatments targeting the biological underpinnings of an individual’s disease. The team recently obtained support from the Medicine by Design program to continue to develop FLAgs and extend the technology to other growth factors.

The antibodies were engineered to mimic key growth factors, proteins called Wnt (pronounced as “wynt”) that normally instruct stem cells– cells that can turn into any cell type in the body — to form tissue in the embryo. Wnt proteins also activate stem cells for tissue repair following injury in adults, while mistakes in Wnt signaling can lead to cancer.

Scientists have long sought to co-opt Wnt as a tool for activating tissue regeneration. But these efforts were stymied by the molecules’ complicated chemistry — Wnt proteins are attached to fat molecules, or lipids, which makes their isolation in active form difficult.

“People have been trying for decades to purify Wnt proteins and make drugs out of them,” says Sidhu. “Drug development would require further engineering of Wnt proteins. But Wnt are difficult to purify, let alone engineer–therefore they unlikely become drugs.”

The associated lipids also prevent Wnt proteins from dissolving in water, making them unsuitable as medicines because they cannot be injected.

That’s why the researchers decided to design antibodies that behave like Wnts, by binding to and activating two classes of Wnt receptors, Frizzled and LRP5/6, on the surface of cells, but are also water soluble and therefore easier to work with.

Called FLAgs, for Frizzled and LRP5/6 Agonists, the antibodies can be designed to replicate any one of the hundreds possible Wnt-receptor combinations (humans have 19 different Wnt proteins that can activate 10 Frizzled and eight co-receptors including LRP5/6).

To generate FLAgs, Yuyong Tao, a postdoctoral fellow in Sidhu’s lab, came up with a new molecular configuration that does not exist in nature. Whereas natural antibodies have two binding sites, allowing them to bind to two targets, FLAgs have four, which means that a single molecule can recognize multiple receptors at the same time and mimic how Wnt proteins act in the body.

When added to cell culture, FLAgs were able to substitute for Wnt proteins– a hard-to-source but necessary ingredient in culture medium–and stimulate the formation of stem cell-derived intestinal organoids, three-dimensional balls of tissue that resemble the small intestine.

“These 3D organoids hold great potential for research and drug discovery but to grow them you need a source of Wnt proteins to activate stem cells,” says Angers, whose team presented the findings earlier this month at an eminent Gordon conference in the U.S. “Now we have a defined protein, which we can easily obtain in large amounts and which can support the growth of organoids from various tissues.”

“This is going to be really important and transformative for a lot people in the field,” he says.

Most strikingly, when injected into mice, the FLAgs were able to activate the gut stem cells, showing that the antibodies are stable and functional inside the body. The finding raises hopes that FLAgs could be used as treatment for irritable bowel disease and other ailments to regenerate the intestinal lining when it is damaged. Other FLAg variants show promising results in lung, liver and bone regeneration as well as having the potential for treating eye disease.

AntlerA has already attracted investment to develop FLAgs into cutting edge therapeutics and is actively working on treatments for vision loss and bowel diseases. The startup’s name was inspired by FLAgs’ geometrical shape which resembles the antlers of deer and moose which are the fastest regenerating organs in animals.

“The type of discovery we report in our study was possible with a convergence of expertise,” says Angers, co-founder of AntlerA. “Thanks to the close collaboration and proximity between our labs, we were able to apply protein engineering to activate a critical stem cell signaling pathway with the ultimate goal to develop regenerative medicine promoting the repair of diverse tissues in the body.”