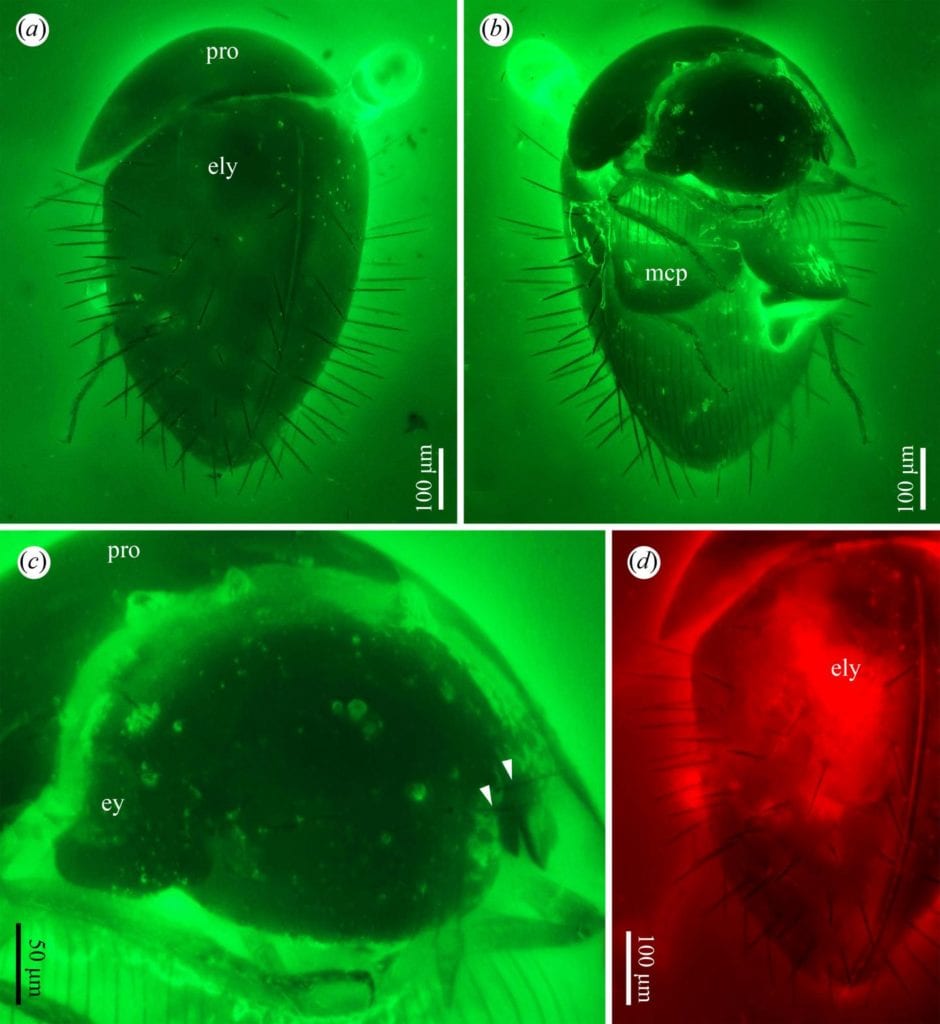 It is well-known that living fossils exhibit stasis over geologically long time scales. Examples are the panda and ginkgo. Now, two tiny beetles trapped in 99-million-year-old amber may join this group.

Beetles are the most species-rich group of animals on our planet. Among four extant suborders of beetles, polyphaga is the largest and most diverse group. The origin and early evolutionary history of polyphagan beetles have been largely based on evidence from the derived and diverse ‘core polyphaga’, whereas little is known about the species-poor basal polyphagan lineages, which include Clambidae and four other extant families.

Recently, an international team led by Dr. CAI Chenyang, from the Nanjing Institute of Geology and Palaeontology of the Chinese Academy of Sciences, reported two new and rare species of the extant family Clambidae from Burmese amber: Acalyptomerus thayerae Cai and Lawrence, 2019, and Sphaerothorax uenoi Cai and Lawrence, 2019. They are important for understanding the early evolution and biogeography of the family and even for polyphagan beetles.

The two new species, represented by five well-preserved fossils, were discovered by Dr. CAI and colleagues from mid-Cretaceous Burmese amber. Both species are extremely morphologically close to their living counterparts, and can be placed in extant genera. Acalyptomerus thayerae (about 1.05-1.15 mm long) has a close affinity to A. herbertfranzi, a species currently occurring in Mesoamerica and northern South America. Sphaerothorax uenoi (about 0.71 mm long) is closely related to extant species of Sphaerothorax, which are usually collected in forests of Nothofagus in Australia, Chile and New Zealand.

The discovery of two Cretaceous species from northern Myanmar indicates that both genera had lengthy evolutionary histories, originating at least by the earliest Cenomanian, and were probably more widespread than at present.

Remarkable morphological similarities between fossil and living species suggest that both genera changed little over long periods of geological time, which is usually considered to be a feature of living fossils. The long-term persistence of similar mesic microhabitats such as leaf litter may account for the 99-million-year morphological stasis in Acalyptomerus and Sphaerothorax.

Inhibiting a protease could improve the treatment of inflammatory bowel disease

Scienmag Dec 3, 2019
The study, published in EMBO Molecular Medicine, shows that blockade of the protease MT1-MMP protects the…

Bronx river turtles get a check-up

Reclamation awards $8.9 million for innovative solutions in water and…