Two is better than one 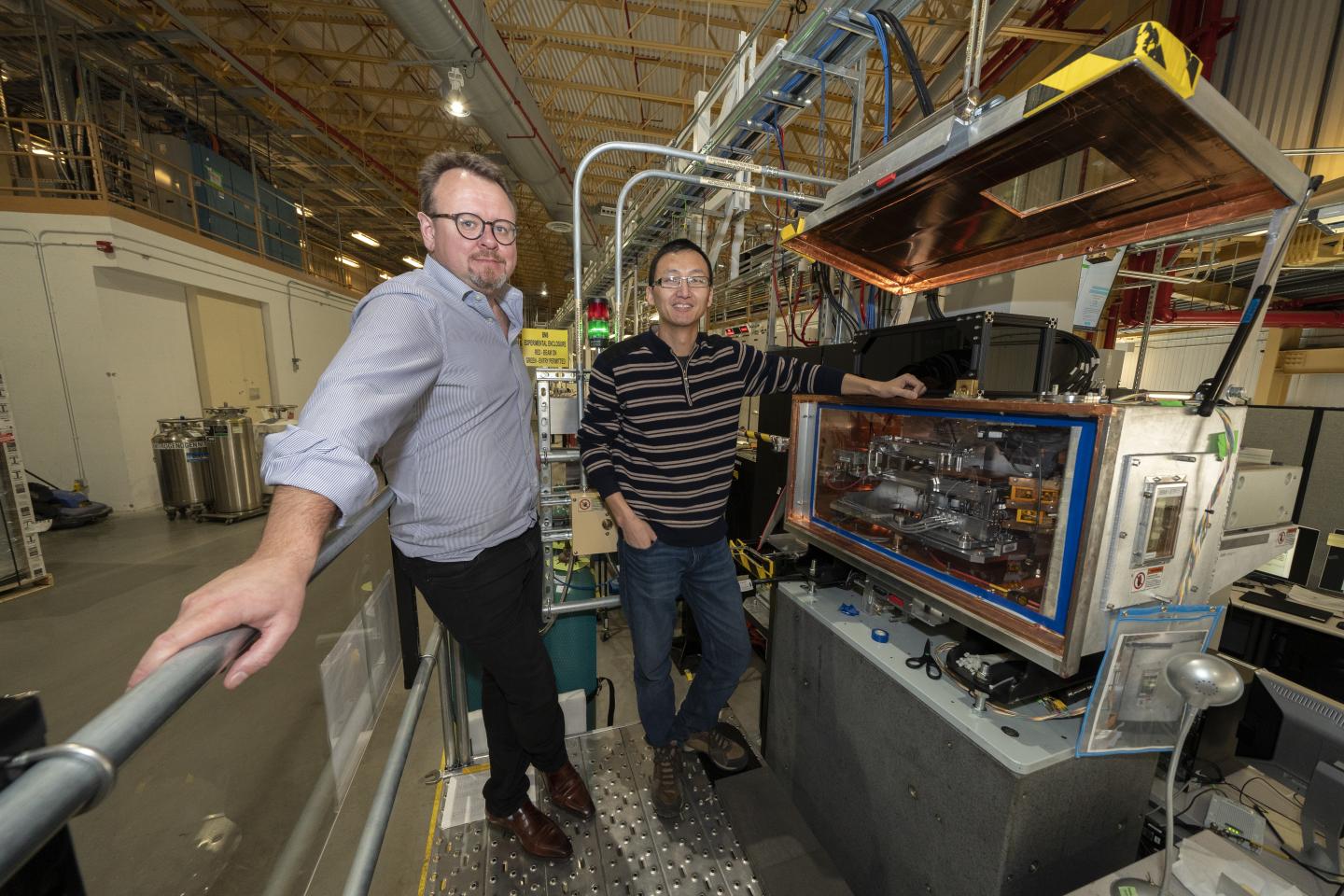 UPTON, NY – A collaboration of scientists from the National Synchrotron Light Source II (NSLS-II)–a U.S. Department of Energy (DOE) Office of Science user facility at DOE’s Brookhaven National Laboratory–Yale University, and Arizona State University has designed and tested a new two-dimensional (2-D) catalyst that can be used to improve water purification using hydrogen peroxide. While water treatment with hydrogen peroxide is environmentally friendly, the two-part chemical process that drives it is not very efficient. So far, scientists have struggled to improve the efficiency of the process through catalysis because each part of the reaction needs its own catalyst–called a co-catalyst–and the co-catalysts can’t be next to each other.

“Our overarching goal is to develop a material that increases the efficiency of the process so that no additional chemical treatment of the water would be necessary. This would be particularly useful for systems that are off-the-grid and far away from urban centers,” said Jaehong Kim, Henry P. Becton Sr. Professor of Engineering and Chair of Department of Chemical and Environmental Engineering at Yale University. Kim is also a member of Nanosystems Engineering Research Center for Nanotechnology-Enabled Water Treatment (NEWT), which partly supported this research.

In their recent paper, published on March 11 in Proceedings of the National Academy of Sciences (PNAS), the team presented the design for the new 2-D catalyst and revealed its structure through measurements at NSLS-II. The trick of their new design is that the scientists managed to place two co-catalysts–one for each part of the reaction–onto two different locations on a thin nanosheet.

“Many processes need two reactions in one. This means that you need two co-catalysts. However, the challenge is that the two co-catalysts have to stay separated, otherwise they’ll interact with each other and create a negative effect on the efficiency of the whole process,” said Eli Stavitski, a chemist and beamline scientist at NSLS-II.

In many cases, catalysts are made from a large number of atoms to form a catalytic nanomaterial, which may seem small to a human but, in the world of chemical reactions, are still fairly large. Therefore, placing two of these materials next to each other without them interacting is quite challenging. To solve this challenge, the team took a different route.

“We used a thin nanosheet to co-host two co-catalysts for the different parts of the reaction. The beauty is in its simplicity: one of the co-catalysts–a single cobalt (Co) atom–sits in the center of the sheet, whereas the other one, a molecule called anthraquinone, is placed around the edges. This would not be possible with catalysts made of nanomaterials- since they would be ‘too big’ for this purpose,” said Kim.

Kim and his team at Yale synthesized this new 2-D catalyst in their lab following a precise series of chemical reactions, heating, and separating steps.

After the scientists synthesized the new two-in-one catalyst, they needed to figure out if the co-catalysts would stay separated during an actual reaction and how well this new 2-D catalyst would perform. However, to really ‘see’ the atomic structure and chemical properties of their two-in-one catalyst in action, the scientists needed two different kinds of x-rays: hard x-rays and tender x-rays. Just like visible light, x-rays come in different colors–or wavelengths–and instead of calling them blue or red, they are called hard, tender, or soft.

“Human eyes cannot see ultraviolet or infrared light and we need special cameras to see them. Our instruments are not able to ‘see’ both hard and tender x-rays at the same time. So, we needed two different instruments–or beamlines–to investigate the catalyst’s materials using different x-rays,” said Stavitski.

The scientists started their investigation at NSLS-II’s hard x-ray Inner Shell Spectroscopy (ISS) beamline using a technique called x-ray absorption spectroscopy. This technique helped the team to learn more about the local structure of the new 2-D catalyst. Specifically, they found out how many neighboring atoms each co-catalyst has, how far away these neighbors are, and how they are connected to each other.

The next stop in the investigation was NSLS-II’s Tender Energy X-ray Absorption Spectroscopy (TES) beamline.

“By using the same technique at TES with tender x-rays instead of hard x-rays, we could see the light elements clearly. Traditionally, many catalysts are made from heavy elements such as cobalt, nickel, or platinum, which we can study using hard x-rays, however our 2-D catalyst also includes important lighter elements such as phosphorous. So, to learn more about the role of this lighter element in our two-in-one catalyst, we also needed tender x-rays,” said Yonghua Du, a physicist and TES beamline scientist.

NSLS-II’s TES beamline is a one of the few instruments within the U.S. that can complement the different hard x-ray capabilities by offering tender x-ray imaging and spectroscopic capabilities.

After their experiments, the scientists wanted to be sure that they understood how the catalyst worked and decided to simulate different candidate structures and their properties.

“We used an approach called density functional theory to understand the structures and the mechanisms that controls the efficiency of the reaction. Based on what we learned through the experiments and what we know about how atoms interact with each other, we simulated several candidate structures to determine which one was most plausible,” said Christopher Muhich, assistant professor of chemical engineering at Arizona State University and also a member of NEWT.

Only by combining their expertise in synthesis, analytical experimentation, and theoretical simulation could the team create their new 2-D catalyst and demonstrate its efficiency. The team agrees that collaboration was the key to their success, and they will continue searching for the next generation of catalysts for various environmental applications.

Mahogany tree family dates back to last hurrah of the dinosaurs