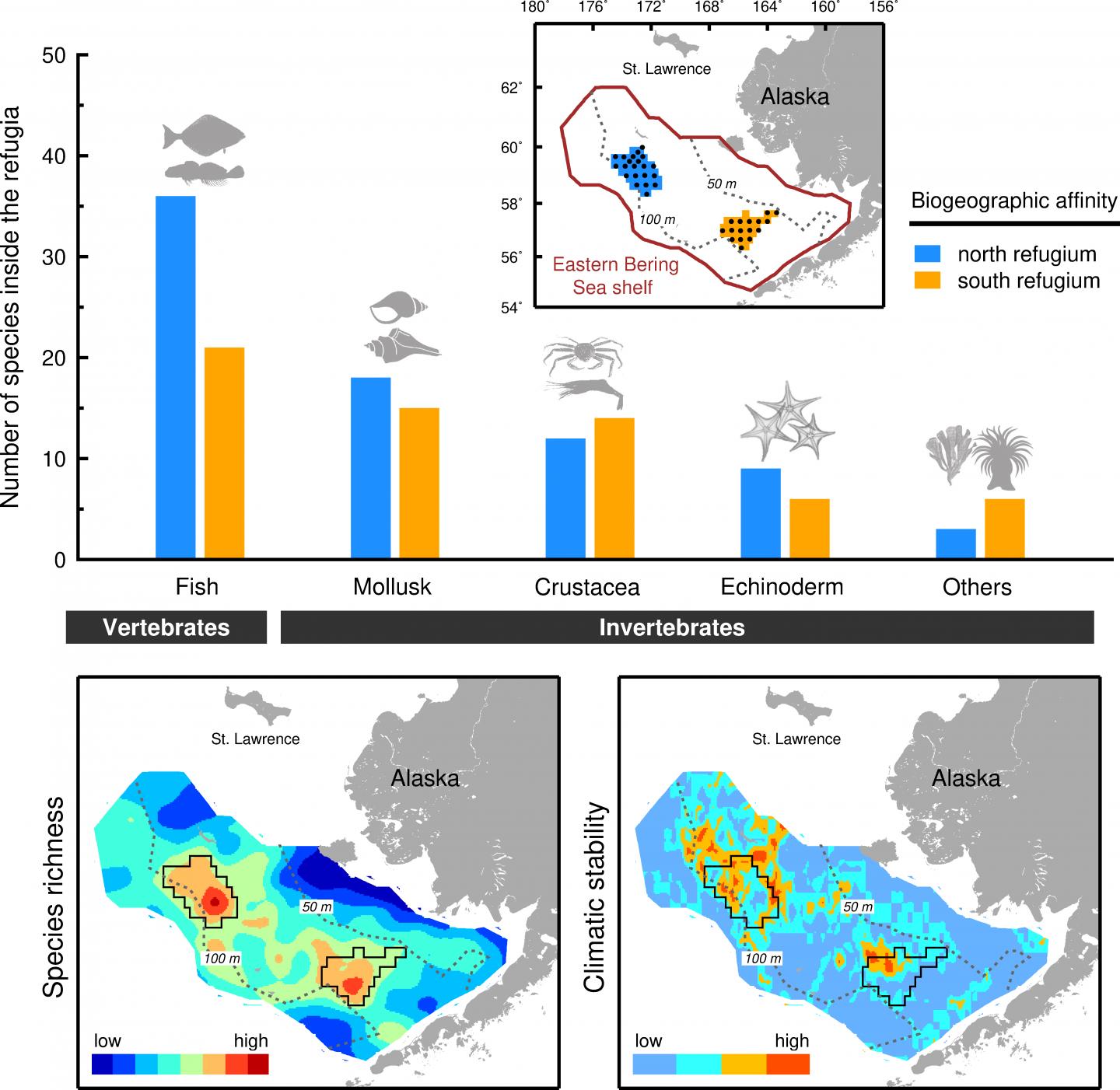 Marine biodiversity, the diversity of life in the seas and oceans, supports ecosystem services of immense societal benefits. However, climate change and human activities have been adversely affecting marine biodiversity for many decades, resulting in population decline, community shifts, and species loss and extinction. Developing effective means to mitigate this rapid biodiversity loss is vital.

Scientists from Hokkaido University have identified and characterised regions in the Eastern Bering Sea where biodiversity has been protected from the effects of climate change. Their work was published in the journal Global Change Biology.

Conservation is one of the many approaches by which we have been able to protect biodiversity in various environments from climate change, pollution and human encroachment. Conservation hinges on the identification of areas where the maximum amount of biodiversity is preserved. One such area are refugia, regions that are relatively buffered from the impacts of ongoing climatic changes, which provide favorable habitats for species when the surrounding environment becomes inhospitable.

The scientists tracked the distribution of 159 marine species in the Eastern Bering Sea, off the coast of Alaska, from data collected by the National Oceanic and Atmospheric Administration (NOAA) between 1990 and 2018. Using statistical analysis, they attempted to find regions where there existed persistently high species richness and a stable marine community over a longer period of time. They also, separately, mapped out the changes in climate across the Eastern Bering Sea over the same period.

The scientists identified two distinct refugia in the fishery-rich waters of the Eastern Bering Sea. These regions covered less than 10% of the total study area but harbored 91% of the species analyzed. Most significantly, among the species sheltered in these refugia, commercially important fish and crabs were present in high numbers — indicating that these refugia conserved high-value resources in addition to supporting high species diversity and community stability. Moreover, these refugia overlapped with regions of high climatic stability over time, where trends in seasonal sea surface temperatures and winter sea ice conditions remained largely unchanged.

Climate buffering and high productivity within the Eastern Bering Sea refugia potentially permit the persistence of stable communities and high biodiversity as well as cushion marine communities from the impacts of fishing. “These biodiversity refugia, albeit small, will be increasingly crucial for preserving communities in this climate-exposed and continually exploited marine ecosystem,” says Irene D. Alabia, the lead author of the paper. “At a larger scale, this underpins the need and urgency to identify and manage marine biodiversity refugia to maintain climate-resilient marine ecosystems and fisheries.”