Manipulating the content of carotenoids, such as ß-carotene, has been found to improve plant growth and increase yield and tolerance to abiotic stresses such as drought and salinity. 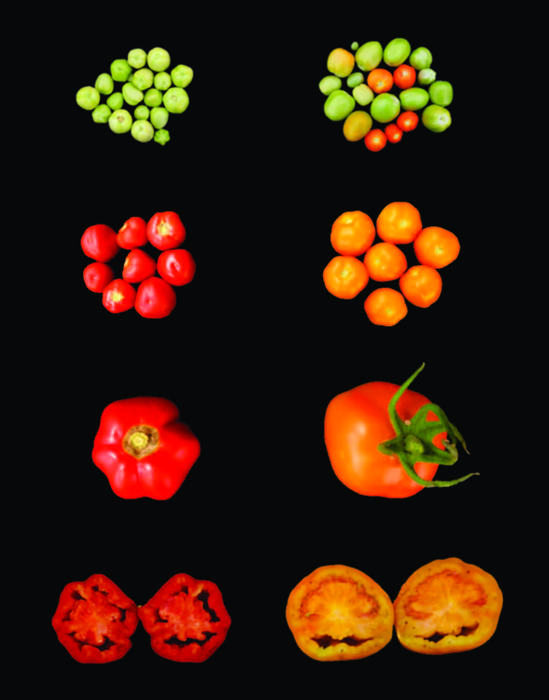 Manipulating the content of carotenoids, such as ß-carotene, has been found to improve plant growth and increase yield and tolerance to abiotic stresses such as drought and salinity.

Within chloroplasts, carotenoids such as ß-carotene and xanthophylls are key components of the photosynthetic apparatus. Now, an international team led by researchers in Salim Al-Babili’s group has shown that alterations in carotenoid metabolism influence hormone content and subsequently plant development and physiology.

ß-carotene is produced by the action of a gene known as lycopene ß-cyclase (LCYB). Having previously shown that expression of the carrot DcLCYB1 gene in tobacco increased photosynthesis, stress tolerance, plant biomass and yield, Moreno wanted to see if manipulation of LCYB activity could confer similar growth advantages in an economically important food crop.

Using three different seed sources, all expressing different LCYB genes from tomato, daffodil and bacteria, the researchers grew plants under controlled conditions and outside in polytunnels.

The results confirmed Moreno’s hypothesis that overexpressing the carotenoid gene in tomato would show similar results to his experiment in tobacco.

“Watching the plants in the greenhouse as the weeks and months went by, the transgenic lines were clearly different from the wild type,” he says.

Fruit yield also increased by up to 77 percent and nutritional content was enhanced, with fruit from the transgenic plants containing 20 times more ß-carotene than the wild types.

“The use of state-of-the-art chromatography and mass spectrometry techniques enabled us to provide a comprehensive picture of the changes at metabolome level, which explained the observed phenotypes” adds Jianing Mi, who performed the analytical part of this study.

Working with Al-Babili, the researchers are now trying to apply this technology on cereal crops.

“This study demonstrates the importance of understanding the metabolic processes that underlie plant growth and response to environmental changes, and shows the large potential of plant metabolic and genetic engineering to combat deficiencies in micronutrients,” says Al-Babili.

The findings pave the way for developing a new generation of crops that combine high productivity and increased nutritional value with the capability to cope with climate change-related challenges.

The introduction of a single gene of the carotenoid biosynthetic pathway to different tomato cultivars led to significant changes in metabolic pathways, large increases in fruit yield and enhanced pro-vitamin A content.