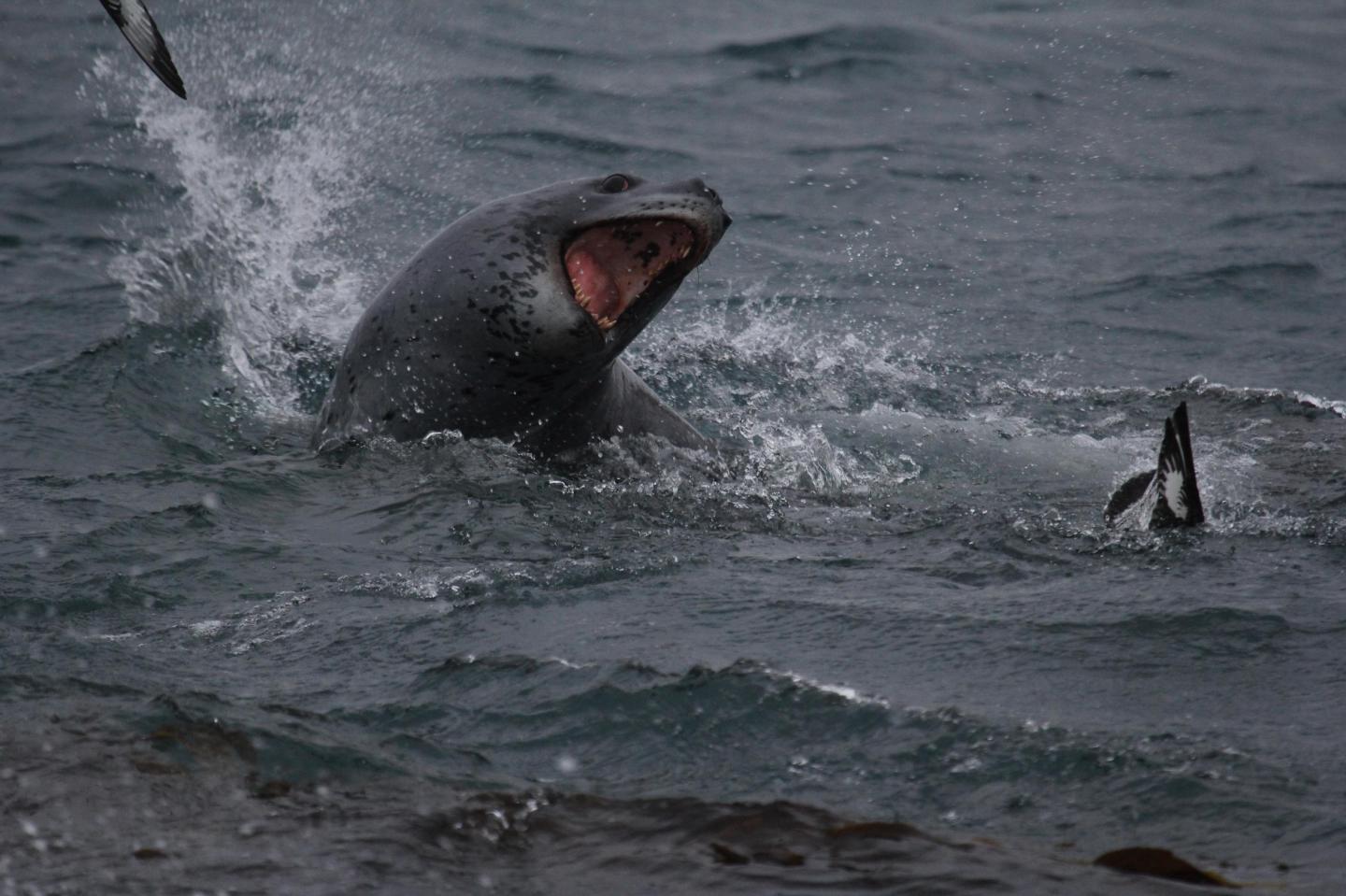 Despite being considered a charismatic and enigmatic Antarctic predator, leopard seals are normally thought of as being solitary.

They are largely intolerant of each other but can be forced to hunt alongside one another when congregating in areas of abundant prey.

A new study analysing the previously unseen footage, captured by a team from production company Silverback Films but not shown in the series itself, reports up to 36 seals seen feeding at the same king penguin colony in South Georgia.

It also highlights examples of two seals feeding on the same penguin carcass, the first evidence of such behaviour ever being recorded.

However, scientists add it is unclear if it is a case of true cooperation, or whether both seals were simply accepting the competitor so that they didn’t have to chase them away, potentially leading to them losing their prey completely.

Published in Polar Biology, the study was led by James Robbins, a Visiting Research Fellow at the University of Plymouth and formerly with the British Antarctic Survey.

He said: “Leopard seals are often portrayed as the villains – chasing fluffy penguins in Happy Feet and creating havoc in the Antarctic. In reality, little is known about these enigmatic creatures, and these observations provide key insights into their behaviour and social antics.

“The footage provided by Our Planet film crews has given us an exciting new insight into the behaviour and lives of leopard seals. There is still so much that we don’t understand about these predators as they live in remote areas of the Antarctic and are often seen alone on an inaccessible iceberg. But I’ve personally had over 500 encounters with leopard seals and have never seen two animals being so tolerant of each other.”

Released in April 2019, Our Planet was produced by Silverback Films and WWF for Netflix, with the leopard seal footage captured in St Andrews Bay and Right Whale Bay during October 2016.

This isn’t the first time that a documentary has allowed previously unknown behaviours to be captured on film. Past media expeditions have recorded killer whales creating waves to wash seals off icebergs, and leopard seals appearing to feed human divers.

In the latter case, it was assumed to be a rare case of gift-giving, but the authors of this study now suggest that cooperative feeding may be a more likely explanation.

They suggest it is more energetically expensive to defend a large kill than it is to tolerate kleptoparasitism (the stealing of food), and that rather than chasing away competitors, seals focus on each gaining some of the food without using large amounts of energy.

David Hocking from Monash University, another author on the paper, added: “The remoteness of Antarctic ecosystems can make it challenging to connect with the wildlife there, but this new footage provides a rare window into that world. Early Antarctic explorers described leopard seals as the ‘principle enemy of the penguin’, but most observations show seals targeting smaller penguin species. This study shows that even large adult king penguins are at risk when leopard seals are around.

“This study also provides a great example of how new technology is helping researchers to make close-hand observations of wild animals. By using a camera drone, the filmmakers were able to fly above the animals without disturbing them, revealing detailed behaviours that otherwise may have gone unnoticed to shore-based observers.”