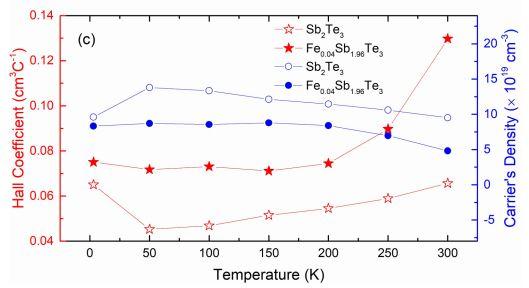 Iron-doping of the topological insulator Sb2Te3 results in useful electronic and magnetic properties, quantified in a recent FLEET study at the University of Wollongong.

After the material is doped via the addition of iron, its electronic structure changes significantly:

“This improved understanding of the effects of doping on the topological insulator Sb2Te3 are critical to inform future possible use in low-energy electronics,” explains project leader Xiaolin Wang.

Unresolved questions concerning the effect of metal doping of Sb2Te3 is related to one of the most fascinating transport properties in topological insulators: the quantum anomalous Hall effect (QAHE).

QAHE describes an effect that was once ‘unexpected’ (ie, ‘anomalous’): quantisation of the transverse ‘Hall’ resistance, accompanied by a considerable drop in longitudinal resistance.

It’s an area of great interest for technologists,” explains Xiaolin Wang. “They are interested in using this significant reduction in resistance to significantly reduce the power consumption in electronic devices.”

The study of magnetic-doped topological insulators seeks to find the optimal set of dopants, magnetic order, and transport properties in order to:

The study Quantum oscillations in iron-doped single crystals of the topological insulator Sb2Te3 was published in Physical Review B in April this year.

This project was led by Prof Xiaolin Wang, who is the theme Leader of ARC Fleet Enabling technology A and the Director of ISEM at the University of Wollongong.

As well as funding by the Australian Research Council, the research benefited from resources of Australia’s National Computational Infrastructure (NCI).

The properties of novel materials such as the topological insulator Sb2Te3 are studied at FLEET, an Australian Research Council Centre of Excellence, within the Centre’s Enabling technology A.

The Centre for Future Low-Energy Electronics Technologies (FLEET) is a collaboration of over a hundred researchers, seeking to develop ultra-low energy electronics to face the challenge of energy use in computation, which already consumes 8% of global electricity, and is doubling each decade.

Scienmag Aug 21, 2019
Study reveals how proteins from the eye's nerve cells relay visual cues to different parts of the brainCredit:…