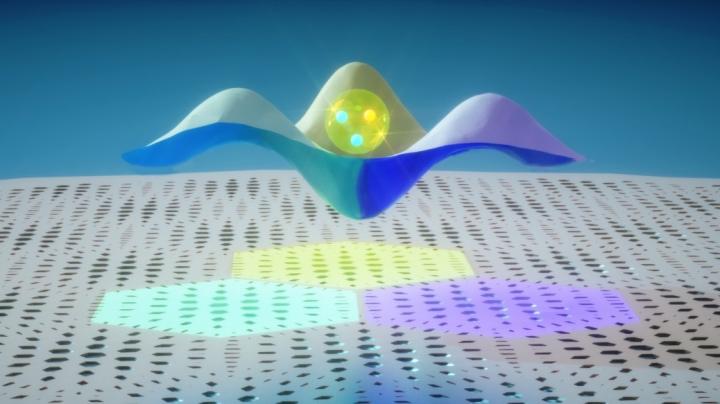 Credit: Ella Maru Studio, with contributions from Hongyi Yu and Wang Yao at the University of Hong Kong; and Wangxiang Li and Joshua Lui at UC Riverside.

RIVERSIDE, Calif. — When two similar atomic layers with mismatching lattice constants — the constant distance between a layer’s unit cells — and/or orientation are stacked together, the resulting bilayer can exhibit a moiré pattern and form a moiré superlattice.

Moiré patterns are interference patterns that typically arise when one object with a repetitive pattern is placed over another with a similar pattern. Moiré superlattices, formed by atomic layers, can exhibit fascinating phenomena not found in the individual layers, opening the door to technological revolutions in many areas, including electricity transmission, information engineering, and quantum computing.

“These trions, which are confined trion states in moiré potential wells — dips in potential energy — of the WSe2/MoSe2 structure, exhibit novel characteristics that differ markedly from those of conventional trions,” said Chun Hung (Joshua) Lui, an assistant professor in the Department of Physics and Astronomy at UC Riverside, who led the research.

A trion is a bound state of two electrons and one hole, or one electron and two holes. A hole is the vacancy of an electron. Trions are the dominant light emitters and energy carriers in atomically thin semiconductors with extra charges. By applying external voltages, electric or magnetic fields, many characteristics of trions, such as their population, emission polarization, and motion, can be controlled. The trions’ versatile tunability makes them useful for light emitters, energy transport, and, potentially, information transmission.

In homogeneous semiconductors, trions are free to move and scatter, resulting in broad optical spectra. However, in moiré superlattices, trions get trapped near moiré potential wells and become moiré trions. Their confinement there prevents random scattering.

“We find the emission lines of moiré trions are more than 10 times sharper than those of free trions,” Lui said. “As the moiré trions are spatially isolated, they can emit single photons, making them a feasible optical source for quantum information technology.”

“Our work points to the possibility of generating two-dimensional arrays of trions in the periodic moiré potential wells,” said Erfu Liu, a postdoctoral researcher in Lui’s lab and the first author of the research paper. “Such 2D trion arrays may exhibit spatial coherence, reveal new physics, and find applications in laser technology.”

The research on moiré trions also reveals some new physics that can be useful in further study of moiré superlattices.

“Moiré superlattices are known to host many ‘minibands’ in their electronic energy band structure,” Lui said. “Such minibands are crucial for fascinating phenomena, such as superconductivity, in moiré superlattices. Due to the small energy spacing between these minibands, it is challenging to probe their detailed structure. Moiré trions inspire a new approach to probe the minibands.”

“This will produce multiple emission lines, and the energy separation of these lines reflects the energy spacing of the minibands,” he added. “Our results support such novel behavior of moiré trions and suggest that moiré trion spectroscopy can be developed to probe electrons in moiré superlattices.”

Given the novel characteristics of moiré trions, Lui expects research on moiré trions will attract much attention.

“Indeed, related studies of moiré trions were also recently reported by researchers at Heriot-Watt University in the United Kingdom, Nanyang Technological University in Singapore, and Tsinghua University in China,” he said. “I believe moiré trion research will surge and lead to many exciting discoveries in the future.”

The research was supported by a National Science Foundation Faculty Early Career Development Award to Lui, additional NSF funds, a UC Riverside startup fund, the U.S. Department of Energy, and other sources.

Lui and Liu were joined in the study by theoretical physicist Yia-Chung Chang of Academia Sinica in Taiwan; graduate students Jeremiah van Baren and Matthew Wilson and faculty members Yongtao Cui and Nathaniel Gabor of UC Riverside; Elyse Barré and Tony Heinz of Stanford University and SLAC National Accelerator Laboratory; and Takashi Taniguchi and Kenji Watanabe of the National Institute for Materials Science in Tsukuba, Japan.

The research paper is titled “Signatures of moiré trions in WSe2/MoSe2 heterobilayers.”