A research group led by Prof. LIANG Eryuan from the Institute of Tibetan Plateau Research (ITP) of the Chinese Academy of Sciences has found that trees may benefit from an earlier start of the growing season in cold humid areas, but not in dry areas. 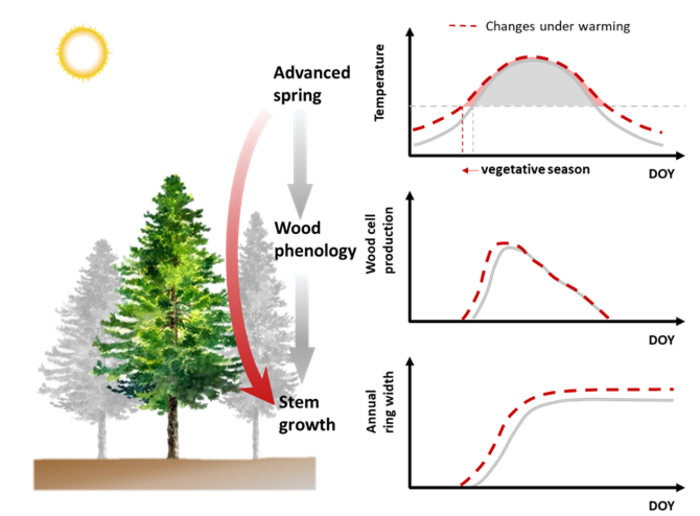 A research group led by Prof. LIANG Eryuan from the Institute of Tibetan Plateau Research (ITP) of the Chinese Academy of Sciences has found that trees may benefit from an earlier start of the growing season in cold humid areas, but not in dry areas.

This paper was published in Nature Ecology & Evolution on Feb. 28.

Plants can naturally feel changes in their environment. When the days lengthen and the temperature warms up after winter chilling, trees sense that it is time to green up and reactivate growth.

Trees tend to sprout and resume growth earlier as climate warms, but whether and how an earlier start of the growing season influences tree growth remain unclear.

Carbon surplus from increased uptake by leaves may not mean that trees necessarily grow more. Thus, extensive observations of the growth of tree stems are essential for predicting changes in productivity because wood is the primary long-term carbon storage pool in forests.

In the study, the researchers used a large collection of annual tree-ring width data from the International Tree-Ring Data Bank, the world’s largest public archive of tree ring data.

“Previous studies have shown that the onset of wood formation is closely related to the fulfilment of critical temperatures and photoperiod. Therefore, we analyzed how annual tree-ring width relates to thermal thresholds for growth start on a hemispheric scale,” said Prof. LIANG.

The onset of wood formation is the main factor that directly or indirectly triggers all subsequent phases of xylem maturation and determines the period of xylem growth. Small advances in the period of cell division can thus lead to substantial increases in xylem cell production, which eventually results in wider growth rings.

Therefore, tree growth in cold climates would be enhanced throughout the entire growing season by an earlier onset of cambial activity or by higher growth rates at the peak of the growing season.

Areas where tree growth benefits from an advanced spring are generally located at the higher latitudes (above 60°N), central Europe, as well as in eastern and western coastal North America. These cool and humid regions are not strongly limited by water availability during the growing season.

The regions showing negative effects of advanced springs on tree growth were mainly located on the Colorado Plateau and the Tibetan Plateau, which correspond to cold and dry conditions, where forests are typically limited by a number of factors including low temperatures, drought events, and poor soil fertility.

“From these observations, we conclude that trees will grow faster under advanced springs, unless they are thirsty,” said Prof. LIANG.

In semi-arid forests of the Colorado Plateau and dry subalpine forests of the Tibetan Plateau, advanced spring did not benefit growth, as a longer growing season induces both atmospheric and soil drought in those regions, and also increases the risk of tree exposure to spring frost.