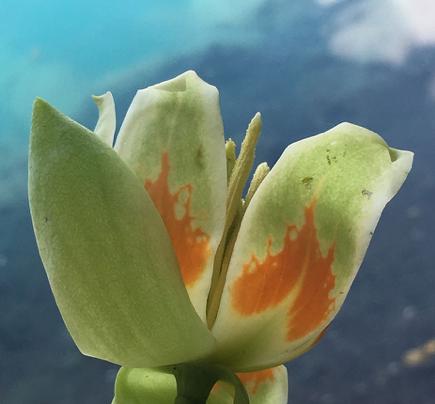 Satellite imagery, carbon dioxide measurements, and computer models all help scientists understand how climate and carbon dynamics are changing in the world’s forests. But the technology powering these high-tech data only stretches back about thirty years, limiting our picture of long-term change.

A new study in Nature Communications by scientists from the Harvard Forest, Columbia University, ETH Zürich, and elsewhere shows how information revealed by a new method of analyzing tree rings matches the story told by more high-tech equipment over the short-term. Because trees are long-lived, looking back in their rings with this new approach may add decades or even centuries to our understanding of carbon storage and climate change in forests.

To test whether tree rings are a good proxy for satellite and other data, the scientists examined ring samples from two widespread tree species — tulip poplar (Liriodendron tulipifera) and northern red oak (Quercus rubra) – growing in three climatically different regions of the eastern US.

By analyzing the carbon and oxygen molecules (stable isotopes) stored in the rings, they could compare the trees’ own picture of forest productivity to estimates derived from satellites. They found strong agreement each year, and over time.

The tree rings also revealed that the biggest changes in annual forest growth were linked to moisture availability, regardless of climate. “Our method showed that the productivity of a forest can be estimated using information from just five trees,” says Laia Andreu Hayles, an Associate Research Professor at the Tree-Ring Laboratory of Columbia University’s Lamont-Doherty Earth Observatory, and co-author of the new study. “The stable isotopes measured in tree rings are highly sensitive to tracking moisture.”

The team says the full power of this new method would rely on an expanded network of tree ring research. “When we put tree ring data to work in historical climate models, we find that the models are more powerful when more species are included,” says Neil Pederson, a Senior Ecologist at Harvard Forest and co-author of the new study. “I suspect this might also be the case when we use models to look forward, to future forest productivity and carbon storage.”

The Harvard Forest, founded in 1907 and located in Petersham, Mass., is Harvard University’s outdoor laboratory and classroom for ecology and conservation, and a Long-Term Ecological Research (LTER) site funded by the National Science Foundation. Its 4,000-acre property is one of the oldest and most intensively studied research forests in the U.S. In addition to studying New England landscapes, research scientists at the Forest study ecosystems around the U.S. and the globe. More information can be found at http://harvardforest.fas.harvard.edu/.

For interviews with a scientist involved in the research, contact Clarisse Hart, hart3@fas.harvard.edu; 978-756-6157.

Caterpillars of the peppered moth perceive color through their skin

Scienmag Aug 2, 2019
Twig-mimicking caterpillars change their color depending on the background and move to color-matching…

Elucidation of structural property in Li-ion batteries that deliver…