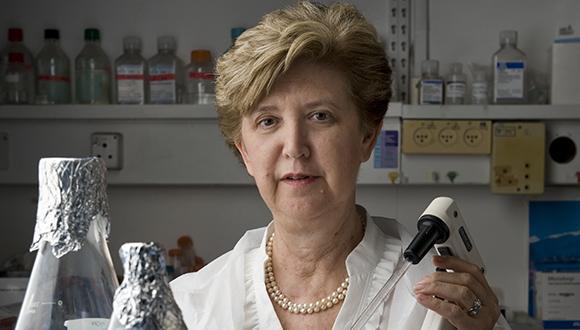 Dental and orthopedic implants are widely used around the world. Common causes for implant failure are the immune response against oral bacteria and titanium particles shed by the implant. These and other phenomena can generate an inflammatory response, activating the osteoclasts (bone resorbing cells), and ultimately leading to osteolysis (destruction of bone tissue) around the implants. After this process begins, it is almost impossible to control, eventually leading to loss of the implant. A similar process occurs around natural teeth, with bacteria as the main cause, and bone resorption triggered by the immune response and inflammatory cells.

Researchers from Tel Aviv University have developed an active molecule (SNV) derived from a vasoactive intestinal peptide (VIP, a short protein), which can significantly suppress both the inflammation and the resulting bone destruction. The new technology can help people with orthopedic implants, following, for example, knee implantations, people with dental implants, and people suffering from gum recession (which is in fact bone resorption) or loose teeth, as a result of gum (periodontal) disease. VIP acts as a neurohormone and neurotransmitter related to many physiological processes, such as expanding blood vessels, expanding respiratory passages, cell division and nerve protection. The researchers attached a lipid to the protein making it “fatty” to enable its penetration through the skin, to facilitate administration as an ointment.

The study, conducted by Prof. Yankel Gabet, Prof. David Kohavi, Prof. Illana Gozes, Dr. David Dangoor and Dr. Michal Eger from TAU’s Sackler Faculty of Medicine was just published in Frontiers in Pharmacology. The paper also presents preparations for a clinical trial and results regarding SNV’s penetration through the skin.

“I recently met friends and relatives who had undergone knee or tooth implantations, and I understand the great need of patients for such medications. I hope we can help them,” says Prof. Illana Gozes. “For years I have worked on VIP – the important protein hormone that maintains the viability of brain cells and also plays a part in sexual activity. We were first in the world to isolate the VIP gene, at a time when genetic cloning was in its infancy. We were also first to develop drug candidates by binding VIP with a lipid to create SNV – a molecule that can penetrate the skin and serve as an ointment drug. At that time, we tried to apply the molecule to problems of impotence and Alzheimer’s disease, in collaboration with Prof. Mati Fridkin of the Weizmann Institute. Recently I came upon a totally different direction, in which we discovered that SNV is effective for protecting bones against inflammatory processes triggering bone resorption.”

To begin with, the researchers tested the molecule’s effect on both bone cells and immune cells. At this stage they discovered that metal particles originating from the implants cause accelerated bone resorption. Testing the molecule in an animal model, they were astounded to find that in the presence of SNV the resorption process is largely suppressed. Thus, the drug may repress or even prevent bone resorption, thereby preserving the hold of implants and teeth in the surrounding bone tissue. “These results were achieved thanks to the collaboration between clinicians and researchers, enabling a research-based response to the clinical challenge,” explains Dr. Michal Eger, from the Maurice and Gabriela Goldschleger School of Dental Medicine.

Prof. Yankel Gabet concludes: “This project is a classic example of collaboration between different departments at TAU’s Faculty of Medicine. On the one hand, together with Prof. David Kohavi, my group has for years studied the connection between the immune system, inflammatory response, and bone cells. On the other, Dr. Michal Eger is a dentist who decided to explore these processes for her doctoral thesis. She attended a course given by Prof. Gozes, in which VIP and SNV were discussed, and an in-depth conversation led to the idea of checking whether these molecules can prevent bone loss around implants and natural teeth. We quickly discovered the enormous potential of SNV for people who suffer from bone loss around teeth and implants. Currently we are working on translating this new discovery to the clinic.”