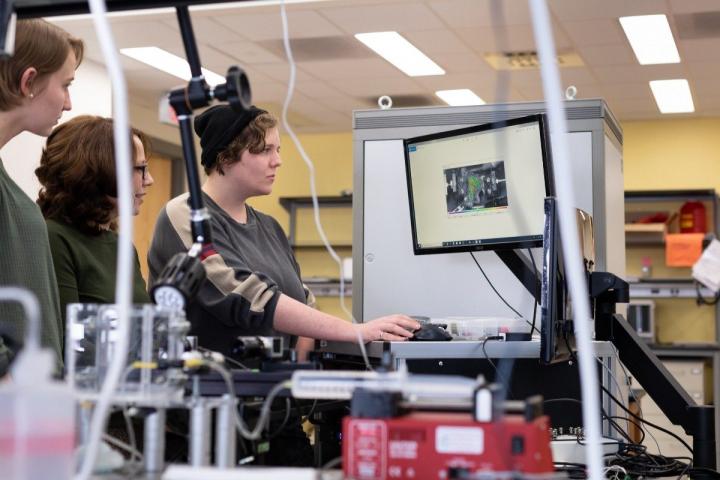 Is it normal to pee a little when you laugh?

It’s a simple question many women ask, and as a symptom of pelvic floor dysfunction, urinary incontinence in women is surprisingly common. However, it can also accompany a related and more debilitating disorder known as pelvic organ prolapse (POP), a condition characterized by the abnormal descent of the female pelvic organs.

Though not life-threatening, pelvic organ prolapse affects half of all women over the age of 50 and is notoriously difficult to treat; surgery is often the only viable option, but success rates are low, with 30 percent of women requiring additional procedures. Many of these pelvic reconstructive surgeries also utilize surgical mesh, a controversial material that comes with its own set of problems.

An associate professor in the Department of Biomedical Engineering and Mechanics within the College of Engineering, De Vita will use animal models to study both the passive and active properties of the uterosacral ligaments, a group of tissues and structures that are predominantly responsible for supporting a woman’s uterus, cervix, and vagina. Yizheng Zhu, an assistant professor in the Bradley Department of Electrical and Computer Engineering, will also serve a key role on the grant by developing imaging systems to quantify ligament cell and tissue deformation under various load conditions.

“Before we can address issues with current pelvic organ prolapse treatments, we first need to take a closer look at healthy uterosacral ligament tissue,” said De Vita. “What are the mechanical properties of these tissues when they’re functioning normally within the body?”

That knowledge will help researchers develop new tissue models that can dramatically transform prolapse prevention and treatment, leading to the development of new stretching routines (known as Kegel exercises), surgical reconstruction guidelines, and even responsive mesh grafts that can be used in POP repair.

The team also hopes to raise awareness about the need for further research on the disorder – and ease lingering public stigma associated with the condition.

“Pelvic organ prolapse is extremely overlooked,” said Alyssa Huntington, an engineering mechanics doctoral student who studies cellular-level aspects of the project. “The proportion of the population that’s affected by it versus the proportion of research being conducted on it is vastly different.”

In women who suffer from pelvic organ prolapse, damaged uterosacral ligament tissues and structures cause the reproductive organs to fall out of place. In severe cases, this descent can even cause the vagina or uterus to protrude outside of the body. Daily symptoms include discomfort and heaviness in the vagina, pain during sexual intercourse, difficulty using the restroom, and the onset of other symptoms associated with pelvic floor dysfunction (such as urinary and fecal incontinence).

And that’s just the half of it.

“Pelvic organ prolapse carries a lot of physical considerations, but it’s more debilitating psychologically,” said De Vita. “It comes with a lot of anxiety and this idea of not feeling good about your body, and many women suffering from this condition also experience depression. It diminishes a woman’s overall quality of life.”

Physicians and researchers don’t know exactly what causes pelvic organ prolapse, but they can point to a set of risk factors. Older women and those who have given birth to three or more children tend to experience POP at higher rates, and smoking, obesity, and heavy weightlifting can also increase the risk.

However, researchers can’t quite explain why some women develop pelvic organ prolapse and others don’t.

“We hope our research can produce objective criteria that rely on evidence,” said De Vita. “Can we say that based on what we know about mechanical properties of healthy ligaments, certain women are more likely to develop prolapse, and then give appropriate recommendations for prevention?”

One important focus of De Vita’s research will be the development of surgical mesh that can be used effectively in pelvic reconstructive surgeries. Because traditional mesh grafts don’t expand and contract alongside organs and tissue, they often cause serious problems within the body, including pain, infection, and even organ perforation.

Eventually, the team would like to create an active mesh for pelvic organ prolapse that’s patient-specific, one that not only moves along with internal tissues but could also accommodate different mechanical properties depending on the needs of different women.

It’s that real-world impact and the avoidance of a one-size-fits-all approach that first attracted biomedical engineering doctoral student Kandace Donaldson to the project – and to Virginia Tech.

“I’m definitely passionate about this area, and when I was looking at graduate schools and labs I wanted to work with, I was focused on social impact,” said Donaldson, who works on tissue-level aspects of the project.

“The proportion of the population that stands to be helped by this research is just huge,” she said.

New technique predicts which melanoma patients are at risk for cancer recurrence,…

Foxes were domesticated by humans in the Bronze Age