A jet airliner roaring to the tarmac has more in common with an offshore wind farm than you may expect. The same can be said of an industrial HVAC system and a futuristic underwater vehicle. 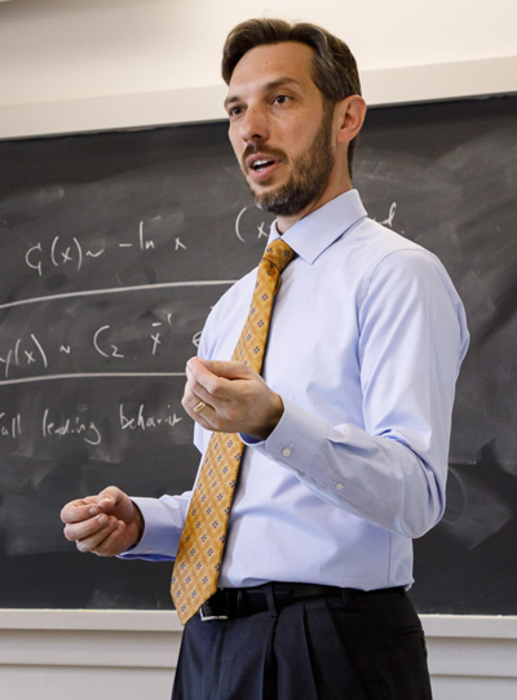 A jet airliner roaring to the tarmac has more in common with an offshore wind farm than you may expect. The same can be said of an industrial HVAC system and a futuristic underwater vehicle.

To Justin Jaworski, an associate professor of mechanical engineering at Lehigh, it’s all just a lot of noise.

And his study of that noise has caught the attention of the American Institute of Aeronautics and Astronautics (AIAA), which announced on September 27, 2021 that it had elected Jaworski as a member of its 2022 class of Associate Fellows.

According to AIAA, Associate Fellows are individuals who have “accomplished or been in charge of important engineering or scientific work, or who have done original work of outstanding merit, or who have otherwise made outstanding contributions to the arts, sciences, or technology of aeronautics or astronautics.”

“Justin has shown the power of applied mathematics to gain insight into a number of areas of technology,” says Donald O. Rockwell, the Paul B. Reinhold Professor of Mechanical Engineering and Mechanics at Lehigh and a Fellow of AIAA. “In doing so, he has established an international network of collaborators including Professor Nigel Peake at the University of Cambridge, with whom he unified our understanding of the silent fight of owls. This knowledge bridges the gap between quiet flyers in nature and noise reduction of aircraft wings and wind turbines. Justin’s approaches are critical to a deeper understanding of a variety of physical phenomena and serve as an important complement to intensive numerical simulations.”

A quiet place
Wings, turbines, and fan blades create turbulent layers of eddies near their surfaces as they slice through the air. When these eddies pass over the part’s edges, they scatter and bring the noise—a nuisance (or worse) to human ears, and a potential driver of inefficiency or deterioration of the mechanical part in question.

On his quest for mechanical quiet, Jaworski has looked to biological inspiration, seeking answers from the near-silent flight of the owl.

“The owl wing has a serrated leading edge, a porous and compliant trailing edge, and a velvety surface composed of flexible interlocking fibers that look like a jungle canopy when viewed under a microscope,” he says. “One part of my work has investigated how owls may cleverly use the effects of elasticity and porosity at their wing edges to reduce noise.”

“Another part of my research program looks at how edge geometry reduces noise,” he continues. “People have been using serrations on edges to reduce noise on things like chevrons (the nozzle on airplane engines), fan blades, and turbine blades, but the question is, how do we optimize them? Should serrations be narrow? Wide? Jagged? Curved? Until very recently there has been scant information on predictive design based on physical principles that matches experimental noise measurements, so my goal is to improve the theoretical models and help direct new experiments that converge on an understanding of the central physical mechanisms.”

To be selected as an Associate Fellow an individual must be an AIAA Senior Member in good standing, with at least 12 years of professional experience, and be recommended by a minimum of three current Associate Fellows. Each year, only one for every 150 voting members is selected and approved. The AIAA’s class of 2022 Associate Fellows will formally be inducted as part of the 2022 AIAA SciTech Forum, a hybrid event set to take place January 3-7, 2022, online and in San Diego, California.

About Justin Jaworski
Professor Jaworski conducts mathematical and numerical modeling for fluid-structure interactions pertinent to aerospace, naval, energy, and biological applications. Representative topics of interest include noise mitigation strategies in low-speed flows inspired by owls, aeroelastic stability, vortex dynamics, unsteady aerodynamics, and microscale power generation. These investigations are carried out with an international cohort of researchers at major universities and national laboratories and have been supported by the National Science Foundation (NSF), Air Force Office of Scientific Research (AFOSR), Office of Naval Research (ONR), and Department of Energy.

Jaworski was appointed a National Research Council Postdoctoral Associate at the Air Force Research Laboratory (2010-2011) and an NSF International Research Fellow in the Department of Applied Mathematics and Theoretical Physics (DAMTP) at the University of Cambridge (2011-2013). He is the recipient of the NSF CAREER Award and the AFOSR Young Investigator Award, as well as the Dean’s Award for Excellence in Mentoring from Duke University. He is an author of over 30 publications in leading technical journals, including Annual Review of Fluid Mechanics, Journal of Fluid Mechanics, and Proceedings of the Royal Society A. Jaworski is a member of the American Physical Society as well as the American Society of Mechanical Engineers.