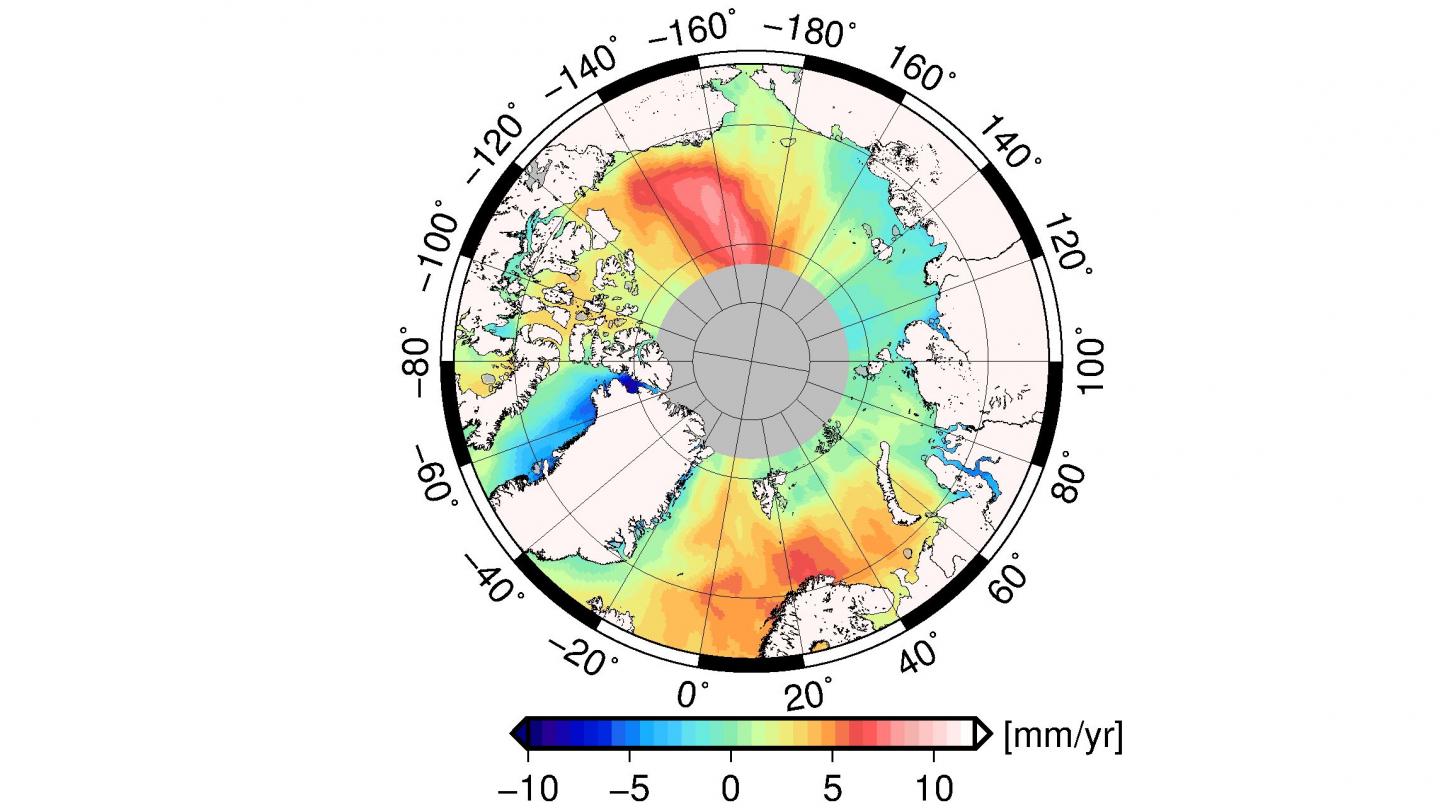 Over the past 22 years, sea levels in the Arctic have risen an average of 2.2 millimeters per year. This is the conclusion of a Danish-German research team after evaluating 1.5 billion radar measurements of various satellites using specially developed algorithms.

“The Arctic is a hotspot of climate change,” explains Prof. Florian Seitz of the German Geodetic Research Institute at the Technical University of Munich (TUM). “Due to rising temperatures, the glaciers of Greenland are receding. At the same time sea ice is melting. Every year, billions of liters of meltwater are released into the ocean.” The enormous volumes of fresh water released in the Arctic not only raise the sea level, they also have the potential to change the system of global ocean currents – and thus, our climate.

But how fast do sea levels rise? And precisely what effect does this have? To answer these questions, climatologists and oceanographers require specific measurements over as long a period as possible.

In a collaborative effort, researchers from the Technical University of Denmark (DTU) and from the TUM have now documented sea-level changes in the Arctic over more than two decades. “This study is based on radar measurements from space via so-called altimetry satellites and covers the period from 1991 to 2018. Thus, we have obtained the most complete and precise overview of the sea level changes in the Arctic Ocean to date. This information is important in terms of being able to estimate future sea levels associated with climate change,” says Stine Kildegaard Rose, Ph.D., researcher at Space DTU.

“The challenge lies in finding the water signals in the measured data: Radar satellites measure only the distance to the surface: Albeit, vast areas of the Arctic are covered with ice, which obscures the seawater,” explains Dr. Marcello Passaro. The TUM researcher has developed algorithms to evaluate radar echoes reflected from the water where it reaches the surface through cracks in the ice.

Using these algorithms, Passaro processed and homogenized 1.5 billion radar measurements from the ERS-2 and Envisat satellites. On the basis of the signals tracked at the TUM, the DTU team worked on the post-processing of these data and added the measurements collected by the current CryoSat radar mission.

From monthly averages to a climate trend

The researchers created a map with lattice points to represent the monthly sea level elevations for the period between 1996 and 2018. The sum of the monthly maps reveals the long-term trend: The Arctic sea level rose by an average of 2.2 millimeters per year.

There are, however, significant regional differences. Within the Beaufort Gyre, north of Greenland, Canada and Alaska, sea levels rose twice as fast as on average – more than 10 centimeters in 22 years. The reason: The low-salinity meltwater collects here, while a steady east wind produces currents that prevent the meltwater from mixing with other ocean currents. Along the coast of Greenland, on the other hand, the sea level is falling – on the west coast by more than 5 mm per year, because the melting glaciers weaken the attractive force of gravity there.

“The homogenized and processed measurements will allow climate researchers and oceanographers to review and improve their models in the future,” concludes Passaro.

The work was funded by the European Space Agency ESA through the Climate Change Initiative (ESA CCI) project.

Flies may also spread disease among monkeys and apes

Climate change will cause a loss of olive production in Andalusia