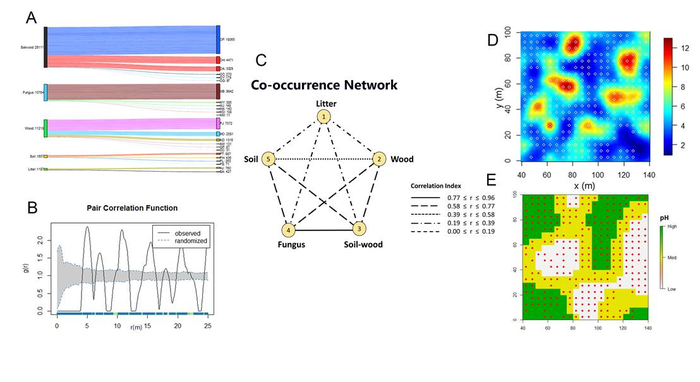 Understanding the spatial distribution and activity density of termites at the feeding group and species levels on a fine scale in tropical forests could extend our knowledge of functional and behavioral dissimilarities among these factors. This study reveals that the spatial distribution of termites is influenced by topography and soil pH. The researchers’ finding appeared on May 4 in Soil Ecology Letters.

From this study, the authors reported interesting new findings. For instance, interspecific competitions or associations were observed on a scale of tens of meters. They also found the influences of plant biomass and litter mass on different feeding groups of termites. These findings are fundamental in uncovering the intermingled ecosystem processes of highly diverse tropical rainforests.

Doctor Liu said, “There are very few studies on the properties of termite activity density. We believe that this study will help us extend our understanding of the distribution of termites across the Asia-Pacific region. Our study is uniquely designed to detect not only the spatial activity density of termites but also their response to environmental influences at the fine scale.”

In this study, they found that soil-wood feeders (Odontotermes) were the dominant feeding group and were reactive to the amount of plant biomass, while fungus growers (Macrotermes), the second most widely distributed feeding group, showed responsiveness to the amount of litter mass. These results are slightly different from those of previous studies. However, their study was based on a quantitative approach to understanding the cause-and-effect mechanisms between the termites and the associated environment. This study shows that topography and soil pH are the most influential factors for the activity density of termites. This finding reaffirms that these factors are important not only for the other taxa in the soil ecosystem but also for the termites, especially at the fine scale.

“We analyzed using both quantitative and qualitative methods to detect the spatial significance of termites in a relatively small range of elevation and environmental conditions. We believe that this study is a good starting point for the future exploration of termite community assembly mechanisms,” said Doctor Xia. The co-occurrence network generated from the coefficients of closeness could explain how feeding groups can exist together and how they are functionally related. This could explain why the dominance of a group of termites has an ecological impact on the existence of other groups and associated regulating capacities.

Understanding a fine-scale ecological process can fundamentally provide us with a deeper understanding of larger-scale complex processes. This study highlighted that not all sympatric feeding groups show competition for food resources and that not all separated groups have any impacts or interactions with others. In biologically diverse and complicated tropical rainforests, a small change in the fine-scale environmental conditions can have a great influence on the distribution, diversity, and activity density of termites. This study provides empirical findings on termite assemblages in a tropical rainforest that explain the species distribution, cooccurrence, and response to environmental heterogeneity on a fine scale.

Founded in May 1954, Higher Education Press Limited Company (HEP), affiliated with the Ministry of Education, is one of the earliest institutions committed to educational publishing after the establishment of P. R. China in 1949. After striving for six decades, HEP has developed into a major comprehensive publisher, with products in various forms and at different levels. Both for import and export, HEP has been striving to fill in the gap of domestic and foreign markets and meet the demand of global customers by collaborating with more than 200 partners throughout the world and selling products and services in 32 languages globally. Now, HEP ranks among China’s top publishers in terms of copyright export volume and the world’s top 50 largest publishing enterprises in terms of comprehensive strength.

The Frontiers Journals series published by HEP includes 28 English academic journals, covering the largest academic fields in China at present. Among the series, 13 have been indexed by SCI, 6 by EI, 2 by MEDLINE, 1 by A&HCI. HEP’s academic monographs have won about 300 different kinds of publishing funds and awards both at home and abroad.

Activity-density and spatial distribution of termites on a fine-scale in a tropical rainforest in Xishuangbanna, southwest China