ALBUQUERQUE, N.M. — As fierce wildfires spread through New Mexico, burning hundreds of structures and forcing thousands of residents to evacuate, Sandia National Laboratories found a way for the workforce to help. 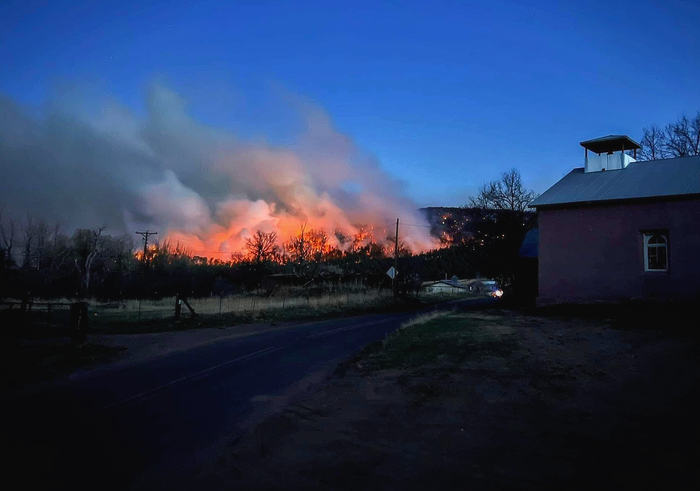 ALBUQUERQUE, N.M. — As fierce wildfires spread through New Mexico, burning hundreds of structures and forcing thousands of residents to evacuate, Sandia National Laboratories found a way for the workforce to help.

“We know that when people in our state are struggling, our staff feel the desire and immediate need to react and pull together,” said Sandia Community Involvement specialist Roberta Rivera.

Partnering with the United Way of Central New Mexico on a funding campaign called Together We Rise, the Sandia workforce was invited to contribute funds to help those affected by the fires. The campaign launched Monday, May 9, and the workforce has already contributed $75,000 to the campaign, which lasts through May 27. Sandia’s Community Involvement team also hosts a list of local collection drives on their website as other ways to help.

In addition to funds donated by the workforce, National Technology & Engineering Solutions of Sandia LLC, which manages the labs, added a $25,000 match, for a total of $100,000 raised so far. Sandia hit the match within two hours of when the campaign went live. All funds raised will be managed by the Albuquerque Community Foundation and the United Way of Central New Mexico.

“This fundraising campaign is for all fires in New Mexico,” Rivera said. “If more funds are raised than are needed at this time, the extra money will be used throughout the rest of fire season. We know this is not the end.”

Through the donation portal, there are a few options for donors to choose from. For example, there is an option to give funds that will go where the need is greatest, and other options that benefit specific fire recovery efforts throughout the state.

“Sandia National Laboratories’ generosity will play a critical role in helping people and communities back on their feet after experiencing the distress caused by these devastating wildfires,” said Rodney Prunty, president and CEO of United Way of Central New Mexico. “We are proud to partner with Sandia employees to facilitate their fundraising efforts that will help so many New Mexicans.”

Wildfires in New Mexico ignited early this year. The largest, near Las Vegas, forced more than 13,000 residents to evacuate before summer. Sandia staff with connections to the affected areas have been anxious as they await news from family and friends. The fires have already taken homes, property and animals and continue to threaten small towns.

“It has been devastating for my family, having to see generations of memories lost in this fire,” said Sandia software systems engineer Andres Padilla. “This is much more than a fire; it’s a culture loss for our state and the communities of San Miguel and Mora counties. We can only hope that one day our children can see the beauty of our mountains and valleys like we did growing up.”

Padilla said his family’s land near Las Vegas is essentially “a valley full of family” with a ranch that has been passed down at least three generations.

“I have relatives who are still at the ranch waiting it out and fighting any fires that come their way,” he said. “I was up there helping my parents move all of their stuff, and we saw the fire come over the ridge. It started coming down into the valley, and it was just heartbreaking to see and know that everything was going to be burned.”

He said everything around his parents’ is gone and although some houses owned by siblings, aunts and uncles are still standing, many of his relatives have been evacuated and displaced. Some are staying in hotels and others in campers. Some who do not have insurance that will cover other places to stay are staying in their homes.

“I have family members at their houses living off of generators,” he said. “They’ve lost everything around them — their barns, hay, garages and greenhouses. They’re trying to make the best of what they have left.”

Padilla said the 25-minute drive from the family ranch to Las Vegas was “the most beautiful drive,” but his dad said it is now depressing as the land is now black, trees are burned and greenery is gone. Sandia solutions architect David Bustamante who also has family in the area said watching the fires and waiting has been taxing.

“I get emotional when I say this. Never in a million years could I ever imagine fire coming that close to (Las Vegas),” Bustamante said. “It was within two miles of my parents’ house and you could see it wanting to creep over that ridge. You could see that there was a clear possibility that it was going to enter the city.”

Bustamante drove to his parents’ house Monday, May 2, to make sure they were safe and help gather important papers, documents and other meaningful items in case the fire got closer to the home. His mom left with one of his brothers to stay in Albuquerque while his dad chose to stay and wait.

“There is history that is important to the community there,” Bustamante said. “To see the flames around it sends shock waves.”

It is a helpless feeling knowing about the pain of those struggling, said Sandia information enterprise systems technologist Kevin Lopez who also has family and friends who live in the Las Vegas area. One of his aunts was evacuated and has been staying in an RV at a state park for more than two weeks, and his uncle’s parents lost their home.

“I am anxious and heartbroken for a lot of the families there who are losing everything,” Lopez said. “They are losing their houses that they’ve had in their family for generations — the memories and the history — some people are losing all of that.”

Lopez hopes fire conditions will improve soon, that the winds will die down and flames will settle.

“We are at the mercy of the winds and flames,” he said. “We are watching where it’s going and hoping people who live near the area get a break.”

Padilla said the only positive thing to come out of the fires is seeing how the community and state has come together. People his family doesn’t know have found ways to contact his dad to see if he’d like to move cattle to their land.

Padilla said some ranchers didn’t have time to move animals when initial fires ignited, so firefighters cut fences so cattle could run.

“I know that a lot of the firefighters said when they went down there, it was like Armageddon,” he said. “There were fires everywhere, animals and wildlife.”

Bustamante praised firefighters who have been working to contain and put out the flames.

“The fires are massive and they’re on are on those jobs 24/7 trying to save populations and homes,” he said. “Kudos and thanks goes to them.”

While the threat of wildfires is immediate and Sandia employees have the option to assist through the fundraising campaign, some researchers are looking at the long-term picture of climate change and say current modeling looks grim.

“Climate projections for this region show increasing temperatures and decreasing moisture availability. These conditions are going to further stress the current landscape’s vegetation profile,” Roesler said. “Mega fires are predicted to increase in frequency and intensity in the coming years.”