Tiny magnets could hold the secret to new quantum computers 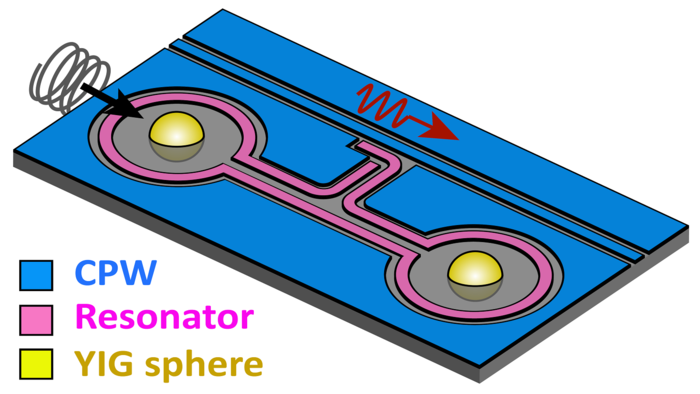 From MRI machines to computer hard disk storage, magnetism has played a role in pivotal discoveries that reshape our society. In the new field of quantum computing, magnetic interactions could play a role in relaying quantum information.

In new research from the U.S. Department of Energy’s (DOE) Argonne National Laboratory, scientists have achieved efficient quantum coupling between two distant magnetic devices, which can host a certain type of magnetic excitations called magnons. These excitations happen when an electric current generates a magnetic field. Coupling allows magnons to exchange energy and information. This kind of coupling may be useful for creating new quantum information technology devices.

“Remote coupling of magnons is the first step, or almost a prerequisite, for doing quantum work with magnetic systems,” said Argonne senior scientist Valentine Novosad, an author of the study. ​“We show the ability for these magnons to communicate instantly with each other at a distance.”

This instant communication does not require sending a message between magnons limited by the speed of light. It is analogous to what physicists call quantum entanglement.

Following on from a 2019 study, the researchers sought to create a system that would allow magnetic excitations to talk to one another at a distance in a superconducting circuit. This would allow the magnons to potentially form the basis of a type of quantum computer. For the basic underpinnings of a viable quantum computer, researchers need the particles to be coupled and stay coupled for a long time.

In order to achieve a strong coupling effect, researchers have built a superconducting circuit and used two small yttrium iron garnet (YIG) magnetic spheres embedded on the circuit. This material, which supports magnonic excitations, ensures efficient and low-loss coupling for the magnetic spheres.

The two spheres are both magnetically coupled to a shared superconducting resonator in the circuit, which acts like a telephone line to create strong coupling between the two spheres even when they are almost a centimeter away from each other – 30 times the distance of their diameters.

“This is a significant achievement,” said Argonne materials scientist Yi Li, lead author of the study. ​“Similar effects can also be observed between magnons and superconducting resonators, but this time we did it between two magnon resonators without direct interaction. The coupling comes from indirect interaction between the two spheres and the shared superconducting resonator.”

One additional improvement over the 2019 study involved the longer coherence of the magnons in the magnetic resonator. ​“If you speak in a cave, you may hear an echo,” said Novosad. ​“The longer that echo lasts, the longer the coherence.”

“Before, we definitely saw a relationship between magnons and a superconducting resonator, but in this study their coherence times are much longer because of the use of the spheres, which is why we can see evidence of separated magnons talking to each other,” Li added.

According to Li, because the magnetic spins are highly concentrated in the device, the study could point to miniaturizable quantum devices. ​“It’s possible that tiny magnets could hold the secret to new quantum computers,” he said.

The magnonic devices were fabricated at Argonne’s Center for Nanoscale Materials, a DOE Office of Science user facility.

A paper based on the study, ​“Coherent coupling of two remote magnonic resonators mediated by superconducting circuits,” was published in the January 24 issue of Physical Review Letters.

The research was funded by DOE’s Office of Science (Office of Basic Energy Sciences).