Researchers at the Centre for Genomic Regulation (CRG) in Barcelona reveal that Srrm3 is a master regulator gene crucial for the development of photoreceptors, cells in the back of the retina which capture and process light, sending signals to the brain that enable vision. Knocking the gene out in zebrafish resulted in severe visual impairment. 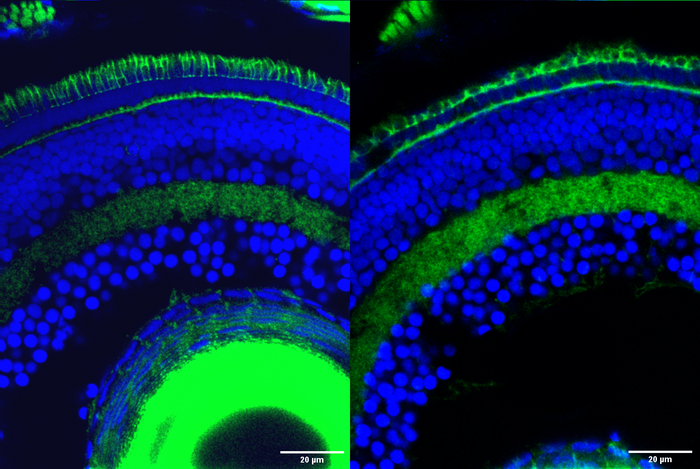 Researchers at the Centre for Genomic Regulation (CRG) in Barcelona reveal that Srrm3 is a master regulator gene crucial for the development of photoreceptors, cells in the back of the retina which capture and process light, sending signals to the brain that enable vision. Knocking the gene out in zebrafish resulted in severe visual impairment.

The research found that, in vertebrates, Srrm3 works by regulating alternative splicing, a process that allows cells to make more than one type of protein from a single gene and is particularly prominent in neuronal cells. The misregulation of alternative splicing can have a devastating impact on human health, for example in cancer or neurological disorders.

Srrm3 was found to specifically regulate the splicing of microexons, tiny fragments of DNA that are just 3-27 letters long. Despite their small size, the regulation of microexons has been shown to play a critical role in protein and cellular function.

The researchers identified dozens of different microexons that are mainly present in photoreceptors but not in other neurons. A large proportion of these microexons affect the function of around 70 genes important for the development of a photoreceptor’s outer segment, the part of the cell that absorbs light. The findings are published in the Proceedings of the National Academy of Sciences.

The study reveals a new layer of cellular specialisation required for the unique cellular shape and function of retinal cells, one of the most complex and specialised cells in the human body. Because of this complexity, retinal cells depend on many unique genes for their development, any which of can have a disease-causing mutation and result in vision loss.

One of the most common causes of inherited vision loss is retinitis pigmentosa, a genetic disorder for which the molecular mechanisms involved are poorly understood. Between 40 to 50 percent of cases of retinitis pigmentosa have no explanation, meaning they carry mutations in genes yet to be identified. The authors of the study plan on carrying out future studies to assess whether Srrm3 or the microexons involved could explain some of these cases.

“The Srrm3 gene has neither been associated with the development of photoreceptor cells nor with the pathogenesis of retinal diseases before. We are already exploring the gene’s role in patients without a genetic diagnosis. If we find cases with mutations in this specific gene, or on any retinal microexons, it could lead to potential new therapeutic strategies to manage the condition,” says Ludovica Ciampi, PhD student at the CRG and first author of the study.

According to ICREA Research Professor Manuel Irimia, understanding microexon regulation in specific cell types is key for identifying new therapeutic targets. “Photoreceptors have unique properties thanks to the regulation of alternative splicing and microexons. This helps make the cell more specialised but also perhaps more susceptible to genetic diseases. Modulating splicing activity is now possible, so the more intricate biology we uncover, the more likely we are to find therapeutic targets to treat retinal diseases,” concludes Dr. Irimia.

The study is a result of a collaboration between ICREA Research Professors Luis Serrano and Manuel Irimia at the CRG, as well as the Telethon Institute of Genetics and Medicine of Naples, Italy and the University of Zurich in Switzerland. The work is funded by the European Research Council, Spanish Ministry of Science and Innovation and the Generalitat de Catalunya.