RICHLAND, Wash.—Trapped for millennia, the tiniest liquid remnants of an ancient inland sea have now been revealed. The surprising discovery of seawater sealed in what is now North America for 390 million years opens up a new avenue for understanding how oceans change and adapt with the changing climate. The method may also be useful in understanding how hydrogen can be safely stored underground and transported for use as a carbon-free fuel source. 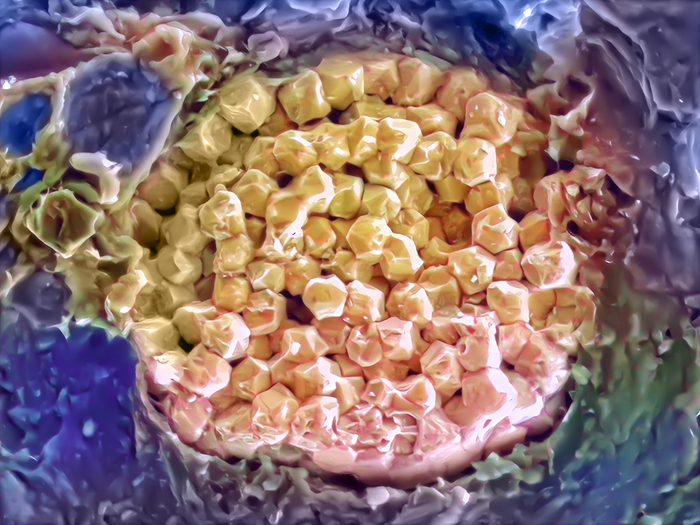 RICHLAND, Wash.—Trapped for millennia, the tiniest liquid remnants of an ancient inland sea have now been revealed. The surprising discovery of seawater sealed in what is now North America for 390 million years opens up a new avenue for understanding how oceans change and adapt with the changing climate. The method may also be useful in understanding how hydrogen can be safely stored underground and transported for use as a carbon-free fuel source.

“We discovered we can actually dig out information from these mineral features that could help inform geologic studies, such as the seawater chemistry from ancient times,” said Sandra Taylor, first author of the study and a scientist at the Department of Energy’s Pacific Northwest National Laboratory.

Taylor worked with PNNL colleagues Daniel Perea, John Cliff, and Libor Kovarik to perform the analyses in collaboration with geochemists Daniel Gregory of the University of Toronto and Timothy Lyons of the University of California, Riverside. The research team reported their discovery in the December 2022 issue of Earth and Planetary Science Letters.

Many types of minerals and gems contain small pockets of trapped liquid. Indeed, some gemstones are prized for their light-catching bubbles of liquid trapped within. What’s different in this study is that scientists were able to reveal what was inside the tiniest water pockets, using advanced microscopy and chemical analyses.

The findings of the study confirmed that the water trapped inside the rock fit the chemistry profile of the ancient inland saltwater sea that once occupied upstate New York, where the rock originated. During the Middle Devonian period, this inland sea stretched from present day Michigan to Ontario, Canada. It harbored a coral reef to rival Australia’s Great Barrier Reef. Sea scorpions the size of a pickup truck patrolled waters that harbored now-extinct creatures like trilobites, and the earliest examples of horseshoe crabs.

But eventually the climate changed, and along with that change, most of the creatures and the sea itself disappeared, leaving behind only fossil remains embedded in sediments that eventually became the pyrite rock sample used in the current experiment.

Clues to an ancient climate and to climate change

Scientists use rock samples as evidence to piece together how the climate has changed over the long span of geologic time.

“We use mineral deposits to estimate the temperature of the ancient oceans,” said Gregory, a geologist at the University of Toronto, and one of the study leaders. But there are relatively few useful examples in the geological record.

“Salt deposits from trapped seawater [halite] are relatively rare in the rock record, so there are millions of years missing in the records and what we currently know is based on a few localities where there is halite found,” Gregory said. By contrast, pyrite is found everywhere. “Sampling with this technique could open up millions of years of the geologic record and lead to new understanding of changing climate.”

The research team was trying to understand another environmental issue—toxic arsenic leaching from rock—when they noticed the tiny defects. Scientists describe the appearance of these particular pyrite minerals as framboids—derived from the French word for raspberry—because they look like clusters of raspberry segments under the microscope.

“We looked at these samples through the electron microscope first, and we saw these kind of mini bubbles or mini features within the framboid and wondered what they were,” Taylor said.

Using the precise and sensitive detection techniques of atom probe tomography and mass spectrometry—which can detect minuscule amounts of elements or impurities in minerals—the team worked out that the bubbles indeed contained water and their salt chemistry matched that of ancient seas.

These types of studies also have the potential to provide interesting insights into how to safely store hydrogen or other gases underground.

“Hydrogen is being explored as a low-carbon fuel source for various energy applications. This requires being able to safely retrieve and store large-amounts of hydrogen in underground geologic reservoirs. So it’s important to understand how hydrogen interacts with rocks,” said Taylor. “Atom probe tomography is one of the few techniques where you can not only measure atoms of hydrogen, but you can actually see where it goes in the mineral. This study suggests that tiny defects in minerals might be potential traps for hydrogen. So by using this technique we could figure out what’s going on at the atomic level, which would then help in evaluating and optimizing strategies for hydrogen storage in the subsurface.”

This research was conducted at EMSL, the Environmental Molecular Sciences Laboratory, a DOE Office of Science user facility at PNNL. Lyons and Gregory applied to use the facility through a competitive application process. The research was also supported by a grant from the Natural Sciences and Engineering Research Council of Canada.