Threatened sturgeon learns for the fitness 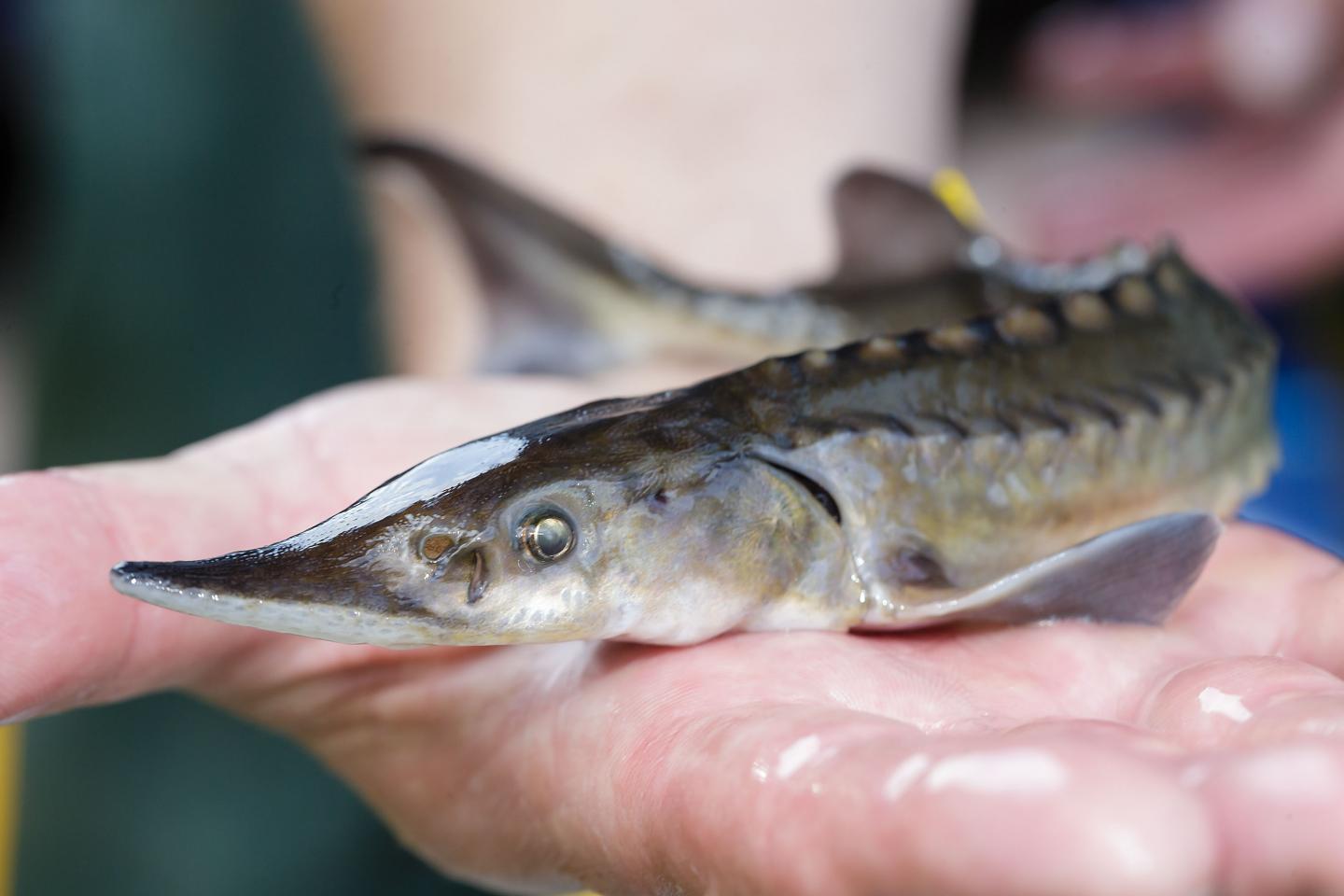 An international team led by IGB is providing one of the first proofs of the complex learning behaviour of fish in a recent study. The Atlantic sturgeon is considered extinct in Germany. The IGB is coordinating the reintroduction of these up to five meter large river giants and is investigating whether sturgeon training can increase their fitness for the wild. An important fitness factor is their feeding behavior. Already a two-week “learning lead” made the search for food more efficient. In addition, the increased formation of the transcription factor neurod1 – an important neuronal component of learning – could be demonstrated in the brain of the trained sturgeons.

Sturgeons are among the most endangered fish species in the world. In the past, two species of these migratory fish were native to the North Sea and Baltic tributaries of Germany. The European sturgeon (Acipenser sturio) lived in the North Sea and the catchment areas of the Elbe, the Atlantic sturgeon (Acipenser oxyrinchus) settled in the Baltic Sea and the catchment areas of the Oder. The IGB develops the scientific basis for the reintroduction of these two species in Germany. This also includes stocking measures with pre-reared young fish. “We have the highest mortality rate of reintroduced sturgeons in the first days in the wild. The faster the animals adapt to the new conditions, the higher the chance of survival.With our investigations we want to create the basis to optimally prepare the animals for the reintroduction,” is how the IGB researcher and study leader, Sven Wuertz, describes the background of the study.

Little known about the learning behaviour of fish so far

Compared to mammals, the formation of nerve cells in the brain in fish is very dynamic and remains active throughout life. This enables fish to react very well to changes in their environment. So far, however, there are only few scientific findings on the underlying physiological processes of the learning behaviour in fish.

Like a vacuum cleaner, sturgeons pick up their prey from the bottom of the watercourse

In the behavioural studies, sturgeons were divided into two groups and kept in large current channels; in nature, sturgeons feed on small organisms such as insect larvae and crustaceans, which they suck up from the fine sandy bottom of the water. The “training team” had to look for food from a handful of sand in their rearing tank for two weeks in order to imitate food intake under natural conditions The group without training was given the insect larvae on the bare floor of the current channel. After two weeks, both groups had to search for their prey in a current channel with completely covered sandy soil in which the food was buried.

The trained fish found the food twice as fast as their untrained conspecifics and there were also differences in the brain structure. Neurod1 is a transcription factor that is produced in greater numbers when new nerve cells are formed. It serves as an indicator for the neuronal component of learning. The gene expression of neurod1 was significantly higher in the trained animals than in the untrained ones. The complicated search for food thus caused the animals’ brains to be more active and to process learning experiences. “The results are significant from a scientific point of view, as there is little evidence to date for the complex learning behaviour of fish. From the point of view of species protection, the results are also very important: Based on the results, we can further optimize the rearing conditions for our sturgeons,” summarizes Joern Gessner, co-author of the study and coordinator of the reintroduction program.

When doctors and nurses can disclose and discuss errors, hospital mortality rates decline