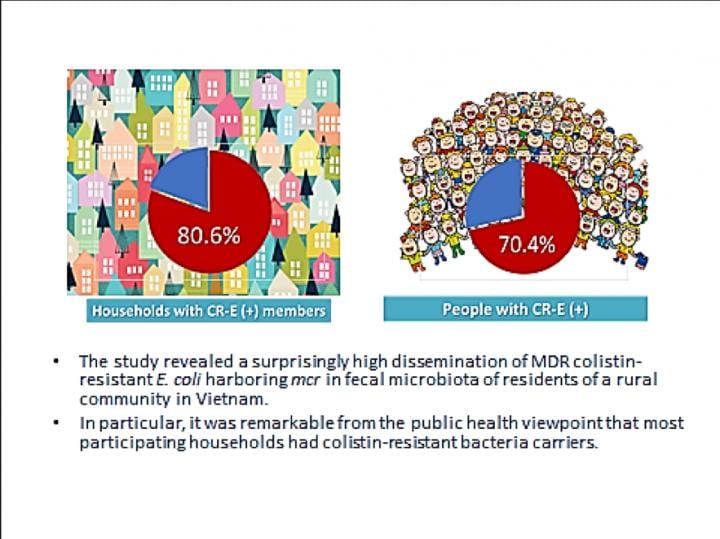 The team’s research results were published in the Journal of Antimicrobial Chemotherapy.

Colistin, an old antibiotic discovered in 1950, kills or inhibits the growth of Gram-negative bacteria, such as E. coli and Pseudomonas aeruginosa. It is one of the few critical antibacterial drugs for treating multidrug-resistant bacteria and is listed on the WHO Essential Medicines List (EML) as a last-resort antibiotic.

Drug-resistant strains are spread in livestock and livestock products in developing countries. This group has pointed out that meat contains colistin-resistant bacteria because a large amount of colistin has been added to livestock food in Vietnam.

First author Yoshimasa Yamamoto says, “CR-E carriers don’t cause health problems immediately, but it’s clear that the number of refractory infections for which antibiotics don’t work will increase, which will become a great menace to clinical practice. In this borderless society, drug-resistant bacteria quickly spread beyond national and regional borders, so it is necessary to strengthen international surveillance systems and promptly take preventative measures.”

The article, “Wide dissemination of colistin-resistant Escherichia coli with the mobile resistance gene mcr in healthy residents in Vietnam” was published in Journal of Antimicrobial Chemotherapy at DOI: https://doi.org/10.1093/jac/dky435

Osaka University was founded in 1931 as one of the seven imperial universities of Japan and now has expanded to one of Japan’s leading comprehensive universities. The University has now embarked on open research revolution from a position as Japan’s most innovative university and among the most innovative institutions in the world according to Reuters 2015 Top 100 Innovative Universities and the Nature Index Innovation 2017. The university’s ability to innovate from the stage of fundamental research through the creation of useful technology with economic impact stems from its broad disciplinary spectrum.
Website: https://resou.osaka-u.ac.jp/en/top

VTT's roadmap towards a sustainable economy

Discovery could lead to munitions that go further, much faster