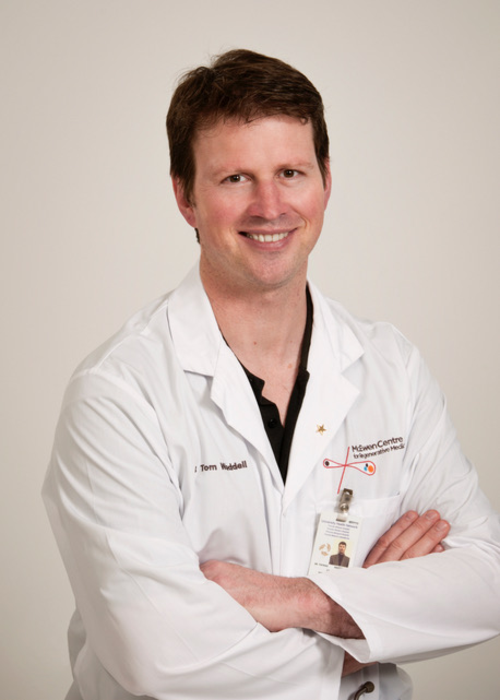 “I was surprised and delighted, but also really humbled when I refreshed my memory of the past Bakken Award winners,” said Dr. Waddell. “It truly is an honor to join these heroes who were like gods in the pantheon when I was first starting out.”

An innovator and influencer, Dr. Waddell is best known for his research and surgical advances in the fields of stem cell and regenerative medicine, lung and airway disease, as well as lung transplantation. He also is committed to researching alternative approaches to the chronic shortage of donor lungs.

Dr. Waddell has been involved in research that could translate into new therapies to speed up the healing process after lung injury or to repair donor lungs before transplantation. He led a team that examined a new method for producing high yields of cells for use in cell therapies. The preliminary findings revealed an important shortcut for cell manufacturing and eventually could be used to create new models of disease, quickly screen investigational drugs for efficacy, or regenerate damaged tissues.

Also among his research undertakings has been the use of physical forces to control cell behavior. In collaboration with bioengineers, he examined how to use the shape of the space that cells grow, divide, and differentiate within to dictate their developmental fate. According to Dr. Waddell, this is critical to the development of functional organs and might eventually be used to replace human donated organs.

“I have learned that there are many different approaches to thinking about a problem,” he said. “I was trained as a clinician and a scientist, but I came to see how engineers and designers also have unique approaches, which bring forth tremendous creativity and along the way, a huge amount of fun.”

The future of cardiothoracic surgery is “extremely bright,” explained Dr. Waddell. “Advances in genomics, artificial intelligence, precision medicine, stem cell biology, genetic engineering, and xenotransplantation are set to reshape much of what we currently do for our patients.”

Importantly, Dr. Waddell advised that surgeons pursue fundamental scientific training so that “there remains a critical mass who can function with a foot in both the scientific and surgical worlds, as ambassadors and translators.”

Dr. Waddell attended medical school at the University of Ottawa in Ontario, Canada, before completing a surgical internship at St. Michael’s Hospital in Toronto, Canada, and a general surgery residency at U of T. He also earned a master of science degree in lung injury and a doctorate degree in neutrophil signaling—both from U of T. During his studies, Dr. Waddell received several honors for his research work, including the Governor General’s Gold Medal for best doctoral thesis in the sciences and the Royal College Prize for Resident Research. He then completed general surgery training and his thoracic surgery fellowship at U of T. Following completion of clinical training, Dr. Waddell finished an additional year of laboratory training as a McLaughlin Fellow at Imperial College London in England.

While in medical school, Dr. Waddell decided he wanted to become a general thoracic surgeon—indirectly because of F. Griffith “Griff” Pearson, MD, a legendary leader in thoracic surgery. “The surgeon who I was working with in Ottawa was trained by Dr. Pearson, and he kept asking, ‘What would Griff do?’ whenever faced with a difficult challenge,” he said.

Another important inspiration for Dr. Waddell was G. Alexander Patterson, MD, FRCS(C), who supervised his first “exposure” to scientific research. “Dr. Patterson was a masterful surgeon, a warm and supportive mentor, and taught me the importance of finding clarity around ‘the main research question,’” he said.

Over his distinguished career, Dr. Waddell has earned many distinctions, including the Lister Prize—the highest research honor from the Department of Surgery at U of T. In addition, he has published more than 300 peer-reviewed scientific publications and received $7 million+ in peer-reviewed research grants.

Among his most rewarding professional moments so far, though, was a surgery he and his team performed on a young woman dying of septic shock due to end-stage cystic fibrosis. The transplant team removed her lungs and kept her alive with complex extracorporeal membrane oxygenation support for almost a week before successfully transplanting lungs into the empty cavity. While the patient died years later due to an unrelated issue, Dr. Waddell shared that “her happiness with how we had saved her is one of my best memories of being a physician.”

“Dr. Waddell is superb academic surgeon who has made significant contributions to clinical medicine, leadership, education, and research,” said 2021-2022 STS President Sean C. Grondin, MD, MPH, FRCSC. “It is a great honor to recognize these contributions by presenting him with the STS Earl Bakken Award.”

Dr. Waddell and his wife have three children. His interests include rock and ice climbing—sports that require precise focus and clarity, which Dr. Waddell finds “very helpful in surgical thinking.”

The Earl Bakken Scientific Achievement Award was established in 1999 through a grant from Medtronic, Inc., to honor individuals who have made outstanding scientific contributions that have enhanced the practice of cardiothoracic surgery and patients’ quality of life. The award was named for Medtronic co-founder Earl Bakken. Among numerous other achievements, Bakken developed the first wearable artificial pacemaker.

Founded in 1964, The Society of Thoracic Surgeons is a not-for-profit organization representing more than 7,700 cardiothoracic surgeons, researchers, and allied health care professionals worldwide who are dedicated to ensuring the best possible outcomes for surgeries of the heart, lung, and esophagus, as well as other surgical procedures within the chest. The Society’s mission is to advance cardiothoracic surgeons’ delivery of the highest quality patient care through collaboration, education, research, and advocacy.