This fish has adapted to Canada’s deepest, coldest lakes. UTSC researchers are unravelling its genetics to find out how

The deepwater sculpin is not an attractive fish by any conventional standard. You won’t find it hanging on a plaque or landing a feature role in a Disney movie. 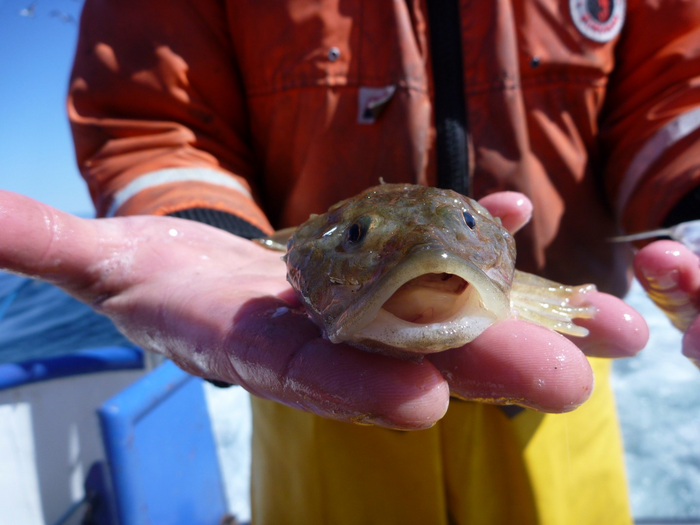 The deepwater sculpin is not an attractive fish by any conventional standard. You won’t find it hanging on a plaque or landing a feature role in a Disney movie.

What you might say about the bottom-dweller is that it’s a survivor, having managed to eke out an existence at the bottom of Canada’s deepest and coldest lakes since the last ice age.

Researchers at U of T Scarborough are now sequencing its entire genome to see how this seemingly unremarkable fish has been able to adapt to such extreme environments.

“It’s an iconic Canadian survivor,” says Nathan Lovejoy, a professor in the department of biology whose lab is doing the genetics research on the sculpin thanks to a grant from the CanSeq150 initiative.

“Here you have this small, humble fish that has been able to survive in these really tough habitats — and we don’t know much about it, especially how it’s been able to adapt over time.”

Deepwater sculpins live almost exclusively in lakes with depths greater than 35 metres and temperatures colder than 8 C. Its range extends from the Laurentian Great Lakes and the Gatineau region of Quebec northwest through the deepest lakes of Ontario, Manitoba and Saskatchewan to Great Slave and Great Bear Lake in the Northwest Territories.

Physically it is relatively long and flat, with two small black eyes that sit on top of its head. Full grown adults are small, usually between 10-15 cm (4-6 inches) long and weigh less than 25g (less than one ounce).

Despite its unexceptional appearance, it plays an important role in the Great Lakes food chain, connecting the tiny crustaceans and aquatic insects it feeds on to the lake trout and larger predatory fish that prey on the sculpin.

At the same time, Lovejoy says because it lives at such deep depths it remains an understudied fish, with relatively little known about its biology and genetics.

Alex Van Nynatten, a postdoc in the Lovejoy lab, is currently undertaking the enormous task of pouring over reams of data in an effort to sequence the fish’s genome.

“The deepwater sculpin has undergone these major changes to its body as a result of going deeper and deeper,” he says. “So we really want to look at specific molecular adaptions this fish has undergone to adapt to these freshwater environments.”

Collaborating with Professor Belinda Chang from the department of cell and systems biology, Van Nynatten is particularly interested in studying the fish’s vision genes, specifically those for seeing in cold, low light conditions.

Over time, the deepwater sculpin has also lost the horns on top of its head that are still present in the fourhorn sculpin.

“It’s possible that as the deeper it went, they weren’t being preyed on by birds anymore, so that defense mechanism was no longer necessary,” he says.

The fact the fish has undergone such drastic changes in a relatively short period of time makes it a fascinating subject for a genetics study, says Van Nynatten. The researchers would also like to eventually sequence the genome of the fourhorn sculpin in order to compare the two species.

Despite showing remarkable success in adapting to their environment over time, the deepwater sculpin’s future might be in jeopardy from climate change and invasive species like the round goby and zebra mussels. It’s currently listed as a species of special concern under Canada’s Species at Risk Act.

In an effort to help with monitoring, Lovejoy’s lab is working with Professor Nick Mandrak on developing a technique that relies on environmental DNA analysis. Because fish shed DNA through their feces and urine, the technology would be able to track the number of individual deepwater sculpin living in a given area based on a water sample.

“One of the big problems with climate change is that it forces everything living in a lake deeper and deeper into cold water, so there’s much more competition” says Van Nynatten.

“Having a way to monitor their numbers would be very beneficial, especially because they live in such deep, inaccessible environments.”