In Batesian mimicry, a harmless species imitates a more dangerous one in an evolutionary “ruse” that affords the mimic protection from would-be predators. Now, researchers reporting in Current Biology on May 9, 2022, have discovered the first case of acoustic Batesian mimicry in mammals and one of very few documented in any species: greater mouse-eared bats imitate the buzzing sound of a stinging insect to discourage predatory owls from eating them. 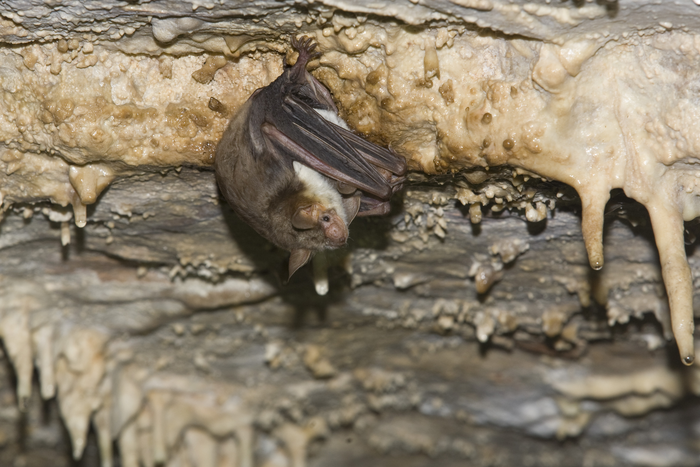 In Batesian mimicry, a harmless species imitates a more dangerous one in an evolutionary “ruse” that affords the mimic protection from would-be predators. Now, researchers reporting in Current Biology on May 9, 2022, have discovered the first case of acoustic Batesian mimicry in mammals and one of very few documented in any species: greater mouse-eared bats imitate the buzzing sound of a stinging insect to discourage predatory owls from eating them.

“In Batesian mimicry, a non-armed species imitates an armed one to deter predators,” said Danilo Russo of Università degli Studi di Napoli Federico II in Portici, Italy. “Imagine a bat that has been seized but not killed by the predator. Buzzing might deceive the predator for a fraction of a second—enough to fly away.”

Russo made the discovery while conducting field research in which he frequently caught the bats in mist-netting operations. “When we handled the bats to take them out of the net or process them, they invariably buzzed like wasps,” Russo says.

They recognized the buzzing as some sort of unusual distress call. They thought there might be different reasons the bats made the sound. Perhaps it could send a warning to others of its species or deter predators. Russo and team put the idea aside and continued along with other research questions. Years later, they decided it was time to design a careful experiment to test their ideas about that buzzing.

In their studies, they first looked at the acoustic similarity between buzzing sounds of the bats and stinging social hymenopteran insects. Next, they played those sounds back to captive owls to see how they would react.

Different owls reacted in variable ways, likely depending on their prior experiences. Nevertheless, they consistently reacted to insect and bat buzzes by moving farther away from the speaker. In contrast, the sound of potential prey got them to move closer. The researchers say the findings provide the first example of interspecific mimicry between mammals and insects as well as one of few examples of acoustic mimicry.

Interestingly, their analysis of the sounds revealed that the similarity between buzzes broadcast by hornets and bats was most evident only once acoustic parameters that the owls can’t hear were excluded from the analysis. In other words, Russo explains, the buzzing sounds are even more similar when heard the way owls hear them.

Do owls avoid that buzzing sound because they’ve been stung before? Russo says that stinging insects likely do sting owls, but they don’t have the data to prove it. There is other evidence that birds avoid such potentially noxious insects, however. For example, when hornets move into nest boxes or tree cavities, birds in general won’t even explore them and they certainly don’t nest there.

Because the three study species in question all share many of the same spaces, such as buildings, rock crevices, or caves, there is likely to be plenty of opportunity for them to interact, according to the researchers. Even so, they find this intricate relationship among distantly related species intriguing.

“It is somewhat surprising that owls represent the evolutionary pressure shaping acoustic behavior in bats in response to unpleasant experiences owls have with stinging insects,” says Russo. “It is just one of the endless examples of the beauty of evolutionary processes!”

Russo notes that there are many other vertebrate species that also buzz when disturbed and hundreds of bat species, some of which may use similar strategies. They hope to look for these interesting dynamics within other interacting groups in future studies.

Current Biology (@CurrentBiology), published by Cell Press, is a bimonthly journal that features papers across all areas of biology. Current Biology strives to foster communication across fields of biology, both by publishing important findings of general interest and through highly accessible front matter for non-specialists. Visit http://www.cell.com/current-biology. To receive Cell Press media alerts, contact [email protected]