Scientists found that in actual materials, there’s no such thing as a critical point at which a quantum phase transition occurs in a genuine zero field because of the persistence of the residual magnetic field created by the many-body interaction 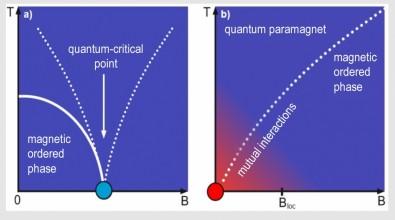 This topic is treated from the theoretical standpoint in the article “Unveiling the physics of the mutual interactions in paramagnets “, published in Scientific Reports, an online journal owned by Springer Nature.

The paper resulted from discussions held in the laboratory in the context of the doctoral research of the two main authors, Lucas Squillante and Isys Mello, supervised by the last author, Mariano de Souza , a professor in the Physics Department of São Paulo State University’s Institute of Geosciences and Exact Sciences (IGCE-UNESP) in Rio Claro, Brazil.

The other coauthors are Roberto Eugenio Lagos Mônaco and Antonio Carlos Seridonio , also professors at UNESP, and Harry Eugene Stanley , a professor at Boston University (USA).

The study was supported by São Paulo Research Foundation – FAPESP via a grant awarded to the project “Exploring thermodynamic and transport properties of strongly correlated electron systems”, for which Souza was the principal investigator.

The study showed that matter always tends to be ordered at low temperatures owing to many-body interactions. The noninteracting spin gas model therefore does not occur in the real world because a many-body interaction between the spins in the system would impose order.

“We found that in actual materials, there’s no such thing as a critical point at which a quantum phase transition occurs in a genuine zero field because of the persistence of the residual magnetic field created by the many-body interaction. In a broader context, ideal Bose-Einstein condensation can’t be obtained because of this interaction,” Souza said.

A Bose-Einstein condensate, often referred to as the “fifth state of matter” (the others being solid, liquid, gas and plasma), is a group of atoms cooled to within a hair of absolute zero. When they reach that temperature, the atoms have no free energy to move relative to each other and fall into the same quantum states, behaving as a single particle.

Bose-Einstein condensates were first predicted and calculated theoretically by Satyendra Nath Bose (1894-1974) and Albert Einstein (1879-1955) in 1924, but it was not until 1995 that Eric A. Cornell, Carl E. Wieman and Wolfgang Ketterle managed to make one using ultracold rubidium gas, for which all three were awarded the 2001 Nobel Prize in Physics.

“What our study showed was that although a nonideal Bose-Einstein condensate can be obtained experimentally, the ideal condition for condensation can’t be achieved because it presupposes that particles don’t perceive or interact with each other, whereas residual interaction always occurs, even in the vicinity of absolute zero,” Souza said.

“Another discovery was that matter can be magnetized adiabatically [without heat loss or gain] via these mutual interactions alone.”