The Vilcek Foundation awards $250,000 in prizes to immigrant scientists

NEW YORK, September 7, 2021—The Vilcek Foundation announces the recipients of the 2022 Vilcek Foundation Prizes in Biomedical Science, totaling $250,000.  Awarded annually, the prizes honor the contributions of foreign-born scientists to scientific research, discovery, and innovation in the United States. 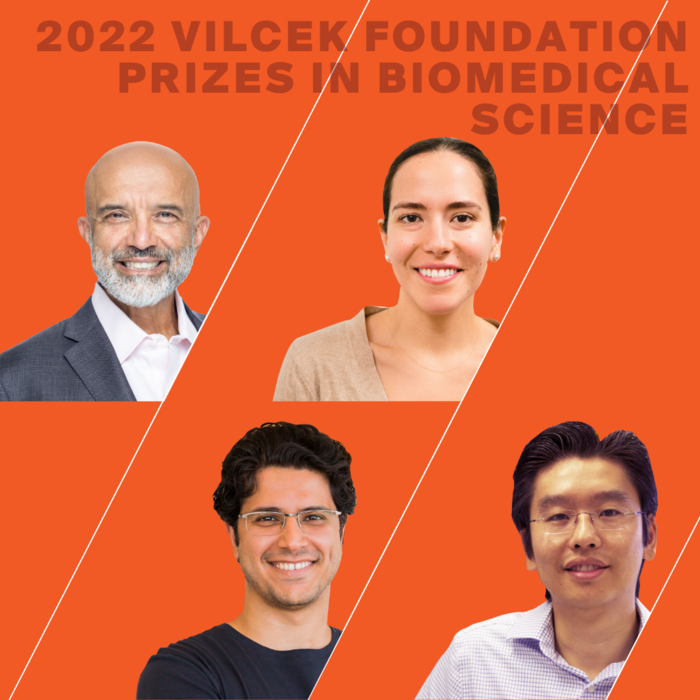 NEW YORK, September 7, 2021—The Vilcek Foundation announces the recipients of the 2022 Vilcek Foundation Prizes in Biomedical Science, totaling $250,000.  Awarded annually, the prizes honor the contributions of foreign-born scientists to scientific research, discovery, and innovation in the United States.

“Scientists from around the globe have long been drawn to work in the United States due to the opportunities that exist in research science here: Scientists are free to pursue funding for work that they are passionate about, and encouraged to collaborate across institutions in the pursuit of their research goals,” said Vilcek Foundation Chairman and CEO Jan Vilcek. “Immigrants are a vital part of the scientific community in the United States; their contributions have helped establish and maintain the United States’ primacy in biomedical science and research.”

The Vilcek Prize in Biomedical Science

The Vilcek Prize in Biomedical Science recognizes an immigrant scientist for outstanding career contributions to biomedical science with a global impact. The recipient of the 2022 Vilcek Prize in Biomedical Science is Vishva M. Dixit, Vice President of Early Discovery Research and Physiological Chemistry at Genentech, a member of the Roche Group. Born in Kenya to Indian parents, Dixit studied and trained as a physician in Kenya before pursuing a career in biomedical research and academia in the United States.

“Vishva Dixit is a molecular biologist, physician and pathologist whose scientific publications rank among the most-cited in the world; his work has elucidated molecular mechanisms of inflammation and has become part of standard scientific textbooks,” said Vilcek. “As the recipient of the 2022 Vilcek Prize in Biomedical Science, Dixit joins the ranks of other exceptional immigrant scientists whose work has shaped our scientific understanding of biology and human health.”

The Vilcek Prizes for Creative Promise in Biomedical Science

Markita del Carpio Landry receives the Vilcek Prize for Creative Promise in Biomedical Science for the development of probes to visualize neurochemical communication in the brain, and for breakthroughs in gene-editing technologies with applications for agriculture and the development of edible biologic drugs. She is an assistant professor at the University of California, Berkeley, and an investigator with the Innovative Genomics Institute and with the Chan Zuckerberg Initiative. Born in Canada to a Bolivian mother and French Canadian father, del Carpio Landry is a member of the Society for the Advancement of Chicanos and Native Americans in Science (SACNAS) and the Society of Hispanic Professional Engineers (SHPE).

Hani Goodarzi receives the Vilcek Prize for Creative Promise in Biomedical Science for using disease modeling, computational methods, and experiments on mouse models and clinical samples to uncover the mechanisms of cancer metastasis and reveal therapeutic targets in cancer. He is the principal investigator of the Goodarzi Lab at the University of California, San Francisco, where he is an assistant professor in biochemistry and biophysics. Under his leadership, the Goodarzi Lab discovered that the protein SNRPA1 drives metastasis in breast cancer and that controlling the protein’s levels in cancer cells alters their ability to metastasize; most recently, the lab team discovered a novel class of RNA found in cancerous cells—orphan noncoding RNA (oncRNA)—which has led to new modes for detecting and monitoring cancer. Goodarzi was born in Tehran, Iran, and immigrated to the United States in 2006.

Harris Wang receives the Vilcek Prize for Creative Promise in Biomedical Science for the development and application of Multiplex Automated Genome Engineering (MAGE), a new framework for manipulating DNA to produce synthetic or engineered recombinant genetic material, and for his use of CRISPR technology to track and record transient cellular processes in the human gut microbiome. Wang’s work has the potential to shape a new area in genomics, modeling, and analysis of complex microbial metabolism and ecosystems. Born in Beijing, China, Wang is an associate professor of systems biology and pathology and cell biology at Columbia University in New York.

The Vilcek Foundation raises awareness of immigrant contributions in the United States and fosters appreciation for the arts and sciences. The foundation was established in 2000 by Jan and Marica Vilcek, immigrants from the former Czechoslovakia. The mission of the foundation was inspired by the couple’s respective careers in biomedical science and art history. Since 2000, the foundation has awarded over $6.4 million in prizes to foreign-born individuals and has supported organizations with over $5.5 million in grants.