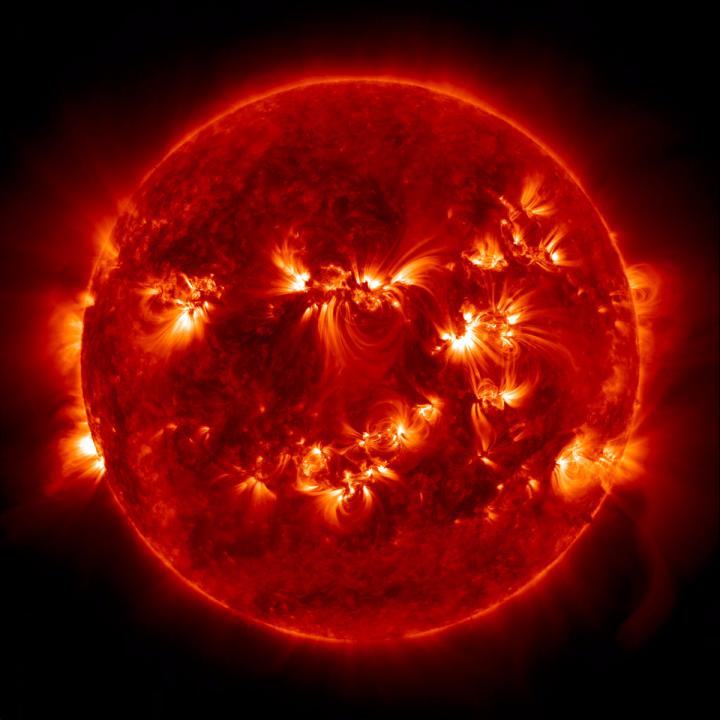 Not only the very concise 11-year cycle, but also all other periodic solar activity fluctuations can be clocked by planetary attractive forces. This is the conclusion drawn by Dr. Frank Stefani and his colleagues from the Institute of Fluid Dynamics at the Helmholtz-Zentrum Dresden-Rossendorf (HZDR) and from the Institute of Continuous Media Mechanics in Perm, Russia. With new model calculations, they are proposing a comprehensive explanation of all important known sun cycles for the first time. They also reveal the longest fluctuations in activity over thousands of years as a chaotic process. Despite the planetary timing of short and medium cycles, long-term forecasts of solar activity thus become impossible, as the researchers in the scientific journal Solar Physics (DOI: 10.1007/s11207-021-01822-4) assert.

Solar physicists around the world have long been searching for satisfactory explanations for the sun’s many cyclical, overlapping activity fluctuations. In addition to the most famous, approximately 11-year “Schwabe cycle”, the sun also exhibits longer fluctuations, ranging from hundreds to thousands of years. It follows, for example, the “Gleissberg cycle” (about 85 years), the “Suess-de Vries cycle” (about 200 years) and the quasi-cycle of “Bond events” (about 1500 years), each named after their discoverers. It is undisputed that the solar magnetic field controls these activity fluctuations.

Explanations and models in expert circles partly diverge widely as to why the magnetic field changes at all. Is the sun controlled externally or does the reason for the many cycles lie in special peculiarities of the solar dynamo itself? HZDR researcher Frank Stefani and his colleagues have been searching for answers for years – mainly to the very controversial question as to whether the planets play a role in solar activity.

The researchers have most recently taken a closer look at the sun’s orbital movement. The sun does not remain fixed at the center of the solar system: It performs a kind of dance in the common gravitational field with the massive planets Jupiter and Saturn – at a rate of 19.86 years. We know from the Earth that spinning around in its orbit triggers small motions in the Earth’s liquid core. Something similar also occurs within the sun, but this has so far been neglected with regard to its magnetic field.

The researchers came up with the idea that part of the sun’s angular orbital momentum could be transferred to its rotation and thus affect the internal dynamo process that produces the solar magnetic field. Such coupling would be sufficient to change the extremely sensitive magnetic storage capacity of the tachocline, a transition region between different types of energy transport in the sun’s interior. “The coiled magnetic fields could then more easily snap to the sun’s surface,” says Stefani.

The researchers integrated one such rhythmic perturbation of the tachocline into their previous model calculations of a typical solar dynamo, and they were thus able to reproduce several cyclical phenomena that were known from observations. What was most remarkable was that, in addition to the 11.07-year Schwabe cycle they had already modeled in previous work, the strength of the magnetic field now also changed at a rate of 193 years – this could be the sun’s Suess-de Vries cycle, which from observations has been reported to be 180 to 230 years. Mathematically, the 193 years arise as what is known as a beat period between the 19.86-year cycle and the twofold Schwabe cycle, also called the Hale cycle. The Suess-de Vries cycle would thus be the result of a combination of two external “clocks”: the planets’ tidal forces and the sun’s own movement in the solar system’s gravitational field.

Planets as a metronome

For the 11.07-year cycle, Stefani and his researchers had previously found strong statistical evidence that it must follow an external clock. They linked this “clock” to the tidal forces of the planets Venus, Earth and Jupiter. Their effect is greatest when the planets are aligned: a constellation that occurs every 11.07 years. As for the 193-year cycle, a sensitive physical effect was also decisive here in order to trigger a sufficient effect of the weak tidal forces of the planets on the solar dynamo.

After initial skepticism toward the planetary hypothesis, Stefani now assumes that these connections are not coincidental. “If the sun was playing a trick on us here, then it would be with incredible perfection. Or, in fact, we have a first inkling of a complete picture of the short and long solar activity cycles.” In fact, the current results also retroactively reaffirm that the 11-year cycle must be a timed process. Otherwise, the occurrence of a beat period would be mathematically impossible.

Tipping into chaos: 1000-2000-year collapses are not more accurately predictable

In addition to the rather shorter activity cycles, the sun also exhibits long-term trends in the thousand-year range. These are characterized by prolonged drops in activity, known as “minima”, such as the most recent “Maunder Minimum”, which occurred between 1645 and 1715 during the “Little Ice Age”. By statistically analyzing the observed minima, the researchers could show that these are not cyclical processes, but that their occurrence at intervals of approximately one to two thousand years follows a mathematical random process.

To verify this in a model, the researchers expanded their solar dynamo simulations to a longer period of 30,000 years. In fact, in addition to the shorter cycles, there were irregular, sudden drops in magnetic activity every 1000 to 2000 years. “We see in our simulations how a north-south asymmetry forms, which eventually becomes too strong and goes out of sync until everything collapses. The system tips into chaos and then takes a while to get back into sync again,” says Stefani. But this result also means that very long-term solar activity forecasts – for example, to determine influence on climate developments – are almost impossible.

Institute of Fluid Dynamics at HZDR

Communications and Media Relations at HZDR

The Helmholtz-Zentrum Dresden-Rossendorf (HZDR) performs – as an independent German research center – research in the fields of energy, health, and matter. We focus on answering the following questions:

HZDR is a member of the Helmholtz Association and has six sites (Dresden, Freiberg, Grenoble, Görlitz, Leipzig, Schenefeld near Hamburg) with almost 1,200 members of staff, of whom about 500 are scientists, including 170 Ph.D. candidates.