The space rock that hit the moon at 61,000 kilometers an hour 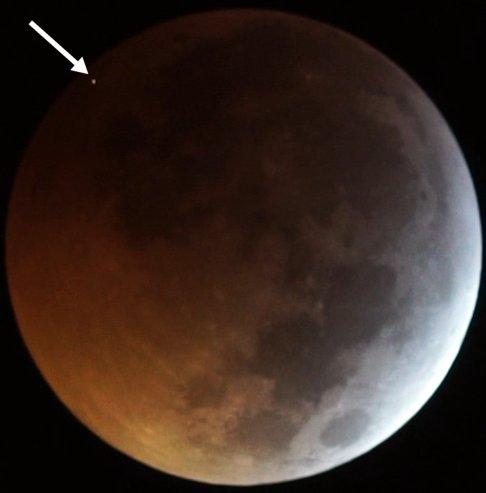 Observers watching January’s total eclipse of the Moon saw a rare event, a short-lived flash as a meteorite hit the lunar surface. Spanish astronomers now think the space rock collided with the Moon at 61,000 kilometres an hour, excavating a crater 10 to 15 metres across. Prof Jose Maria Madiedo of the University of Huelva, and Dr Jose L. Ortiz of the Institute of Astrophysics of Andalusia, publish their results in a new paper in Monthly Notices of the Royal Astronomical Society.

Total lunar eclipses take place when the Moon moves completely into the shadow of the Earth. The Moon takes on a red colour – the result of scattered sunlight refracted through the Earth’s atmosphere – but is much darker than normal. These spectacular events are regularly observed by astronomers and the wider public alike.

The most recent lunar eclipse took place on 21 January 2019, with observers in North and South America and Western Europe enjoying the best view. At 0441 GMT, just after the total phase of the eclipse began, a flash was seen on the lunar surface. Widespread reports from amateur astronomers indicated the flash – attributed to a meteorite impact – was bright enough to be seen with the naked eye.

Madiedo and Ortiz operate the Moon Impacts Detection and Analysis System (MIDAS), using eight telescopes in south of Spain to monitor the lunar surface. Video footage from MIDAS recorded the moment of impact.

The impact flash lasted 0.28 seconds and is the first ever filmed during a lunar eclipse, despite a number of earlier attempts.

“Something inside of me told me that this time would be the time”, said Madiedo, who was impressed when he observed the event, as it was brighter than most of the events regularly detected by the survey.

Unlike the Earth, the Moon has no atmosphere to protect it and so even small rocks can hit its surface. Since these impacts take place at huge speeds, the rocks are instantaneously vaporised at the impact site, producing an expanding plume of debris whose glow can be detected from our planet as short-duration flashes.

MIDAS telescopes observed the impact flash at multiple wavelengths (different colours of light), improving the analysis of the event. Madiedo and Ortiz conclude that the incoming rock had a mass of 45kg, measured 30 to 60 centimetres across, and hit the surface at 61,000 kilometres an hour. The impact site is close to the crater Lagrange H, near the west-south-west portion of the lunar limb.

The two scientists assess the impact energy as equivalent to 1.5 tonnes of TNT, enough to create a crater up to 15 metres across, or about the size of two double decker buses side by side. The debris ejected is estimated to have reached a peak temperature of 5400 degrees Celsius, roughly the same as the surface of the Sun.

Madiedo comments: “It would be impossible to reproduce these high-speed collisions in a lab on Earth. Observing flashes is a great way to test our ideas on exactly what happens when a meteorite collides with the Moon.”

The team plan to continue monitoring meteorite impacts on the lunar surface, not least to understand the risk they present to astronauts, set to return to the Moon in the next decade.

The flash from the impact of the meteorite on the eclipsed Moon, seen as the dot at top left (indicated by the arrow in the second image), as recorded by two of the telescopes operating in the framework of the MIDAS Survey from Sevilla (Spain) on 2019 January 21. Credit: J. M. Madiedo / MIDAS

The new work appears in “Multiwavelength observations of a bright impact flash during the January 2019 total lunar eclipse”, J. M. Madiedo, J. L. Ortiz, N. Morales and P. Santos-Sanz, Monthly Notices of the Royal Astronomical Society, Oxford University Press, in press. A copy of the paper is available from: https://ras.ac.uk/sites/default/files/2019-04/Madiedo%20et%20al.pdf

The Royal Astronomical Society (RAS, http://www.ras.ac.uk), founded in 1820, encourages and promotes the study of astronomy, solar-system science, geophysics and closely related branches of science. The RAS organizes scientific meetings, publishes international research and review journals, recognizes outstanding achievements by the award of medals and prizes, maintains an extensive library, supports education through grants and outreach activities and represents UK astronomy nationally and internationally. Its more than 4,000 members (Fellows), a third based overseas, include scientific researchers in universities, observatories and laboratories as well as historians of astronomy and others.

The RAS accepts papers for its journals based on the principle of peer review, in which fellow experts on the editorial boards accept the paper as worth considering. The Society issues press releases based on a similar principle, but the organisations and scientists concerned have overall responsibility for their content.

Put down the protein shake: Variety of protein better for health

Scienmag Jul 8, 2019
A layer of cells that look like normal stomach lining on top of sites of stomach cancer can make it difficult to…

BOHEMIA will develop a new vector control strategy to kill…