The robot smiled back

Columbia Engineering researchers use AI to teach robots to make appropriate reactive human facial expressions, an ability that could build trust between humans and their robotic co-workers and care-givers 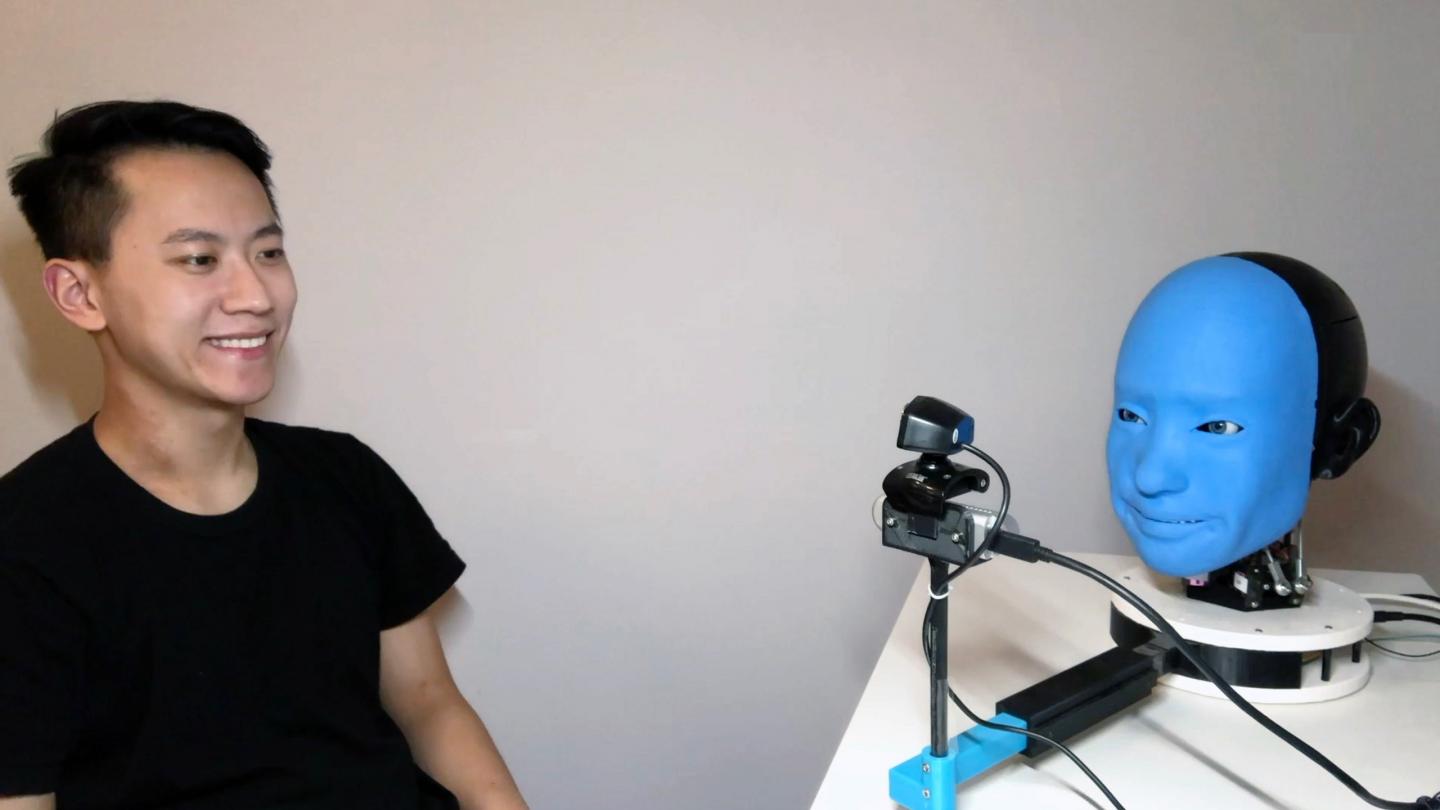 New York, NY–May 27, 2021–While our facial expressions play a huge role in building trust, most robots still sport the blank and static visage of a professional poker player. With the increasing use of robots in locations where robots and humans need to work closely together, from nursing homes to warehouses and factories, the need for a more responsive, facially realistic robot is growing more urgent.

Long interested in the interactions between robots and humans, researchers in the Creative Machines Lab at Columbia Engineering have been working for five years to create EVA, a new autonomous robot with a soft and expressive face that responds to match the expressions of nearby humans. The research will be presented at the ICRA conference on May 30, 2021, and the robot blueprints are open-sourced on Hardware-X (April 2021).

“The idea for EVA took shape a few years ago, when my students and I began to notice that the robots in our lab were staring back at us through plastic, googly eyes,” said Hod Lipson, James and Sally Scapa Professor of Innovation (Mechanical Engineering) and director of the Creative Machines Lab.

Lipson observed a similar trend in the grocery store, where he encountered restocking robots wearing name badges, and in one case, decked out in a cozy, hand-knit cap. “People seemed to be humanizing their robotic colleagues by giving them eyes, an identity, or a name,” he said. “This made us wonder, if eyes and clothing work, why not make a robot that has a super-expressive and responsive human face?”

While this sounds simple, creating a convincing robotic face has been a formidable challenge for roboticists. For decades, robotic body parts have been made of metal or hard plastic, materials that were too stiff to flow and move the way human tissue does. Robotic hardware has been similarly crude and difficult to work with–circuits, sensors, and motors are heavy, power-intensive, and bulky.

The first phase of the project began in Lipson’s lab several years ago when undergraduate student Zanwar Faraj led a team of students in building the robot’s physical “machinery.” They constructed EVA as a disembodied bust that bears a strong resemblance to the silent but facially animated performers of the Blue Man Group. EVA can express the six basic emotions of anger, disgust, fear, joy, sadness, and surprise, as well as an array of more nuanced emotions, by using artificial “muscles” (i.e. cables and motors) that pull on specific points on EVA’s face, mimicking the movements of the more than 42 tiny muscles attached at various points to the skin and bones of human faces.

“The greatest challenge in creating EVA was designing a system that was compact enough to fit inside the confines of a human skull while still being functional enough to produce a wide range of facial expressions,” Faraj noted.

To overcome this challenge, the team relied heavily on 3D printing to manufacture parts with complex shapes that integrated seamlessly and efficiently with EVA’s skull. After weeks of tugging cables to make EVA smile, frown, or look upset, the team noticed that EVA’s blue, disembodied face could elicit emotional responses from their lab mates. “I was minding my own business one day when EVA suddenly gave me a big, friendly smile,” Lipson recalled. “I knew it was purely mechanical, but I found myself reflexively smiling back.”

Once the team was satisfied with EVA’s “mechanics,” they began to address the project’s second major phase: programming the artificial intelligence that would guide EVA’s facial movements. While lifelike animatronic robots have been in use at theme parks and in movie studios for years, Lipson’s team made two technological advances. EVA uses deep learning artificial intelligence to “read” and then mirror the expressions on nearby human faces. And EVA’s ability to mimic a wide range of different human facial expressions is learned by trial and error from watching videos of itself.

The most difficult human activities to automate involve non-repetitive physical movements that take place in complicated social settings. Boyuan Chen, Lipson’s PhD student who led the software phase of the project, quickly realized that EVA’s facial movements were too complex a process to be governed by pre-defined sets of rules. To tackle this challenge, Chen and a second team of students created EVA’s brain using several Deep Learning neural networks. The robot’s brain needed to master two capabilities: First, to learn to use its own complex system of mechanical muscles to generate any particular facial expression, and, second, to know which faces to make by “reading” the faces of humans.

To teach EVA what its own face looked like, Chen and team filmed hours of footage of EVA making a series of random faces. Then, like a human watching herself on Zoom, EVA’s internal neural networks learned to pair muscle motion with the video footage of its own face. Now that EVA had a primitive sense of how its own face worked (known as a “self-image”), it used a second network to match its own self-image with the image of a human face captured on its video camera. After several refinements and iterations, EVA acquired the ability to read human face gestures from a camera, and to respond by mirroring that human’s facial expression.

The researchers note that EVA is a laboratory experiment, and mimicry alone is still a far cry from the complex ways in which humans communicate using facial expressions. But such enabling technologies could someday have beneficial, real-world applications. For example, robots capable of responding to a wide variety of human body language would be useful in workplaces, hospitals, schools, and homes.

“There is a limit to how much we humans can engage emotionally with cloud-based chatbots or disembodied smart-home speakers,” said Lipson. “Our brains seem to respond well to robots that have some kind of recognizable physical presence.”

Added Chen, “Robots are intertwined in our lives in a growing number of ways, so building trust between humans and machines is increasingly important.”

The study is titled “Smile Like You Mean It: Driving Animatronic Robotic Face with Learned Models.”