The risk of death from yellow fever can be detected sooner

A FAPESP-funded study with results published in The Lancet Infectious Diseases has identified markers capable of predicting mortality in patients with symptoms of yellow fever, potentially helping to prevent the development of severe conditions 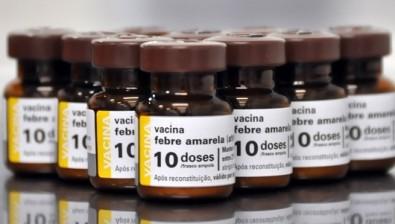 Approximately ten out of every 100 people who are bitten by mosquitos infected by the yellow fever virus develop symptoms of the disease. Although most infected people do not develop the disease, it is lethal to approximately 40% of those who do.

Outbreaks of yellow fever have occurred in Brazil in recent years despite the existence of a safe and efficacious vaccine since 1938. Even after more than a century of research, scientists and physicians were unaware of any specific clinical and laboratory predictors of mortality that could help prioritize admission to hospital intensive care units, which would be extremely useful given that patients with yellow fever often deteriorate rapidly.

“Many patients admitted to the health services with a diagnosis of yellow fever aren’t initially severely ill. They may even walk into the hospital. However, within days they can become very sick indeed, and a fairly significant proportion die.” said Esper Kallás, Full Professor in the Department of Infectious and Parasitic Diseases at the University of São Paulo’s Medical School (FM-USP) in Brazil.

“We had no previous knowledge of markers that could be used by medical teams to assess each patient’s prognosis and identify those most likely to develop severe illness to treat them accordingly, improving the probability of recovery,” Kallás said.

These markers have now been identified. They are described in an article in The Lancet Infectious Diseases published by Kallás and 19 other researchers affiliated with FM-USP, the university’s Tropical Medicine Institute (IMT-USP), the São Paulo Emílio Ribas Infectology Institute (IIER-SP), and the DASA S.A., a Brazilian medical diagnostics firm (owner of the Delboni Auriemo and Lavoisier laboratory chains).

The study was supported by São Paulo Research Foundation – FAPESP as part of a project led by Ester Sabino, director of IMT-USP and a professor in FM-USP’s Department of Infectious and Parasitic Diseases.

The main aim of the study was to identify predictors of mortality measurable during hospitalization. They focused on patients with suspected yellow fever admitted to the Hospital das Clínicas, FM-USP’s general hospital and IIER-SP, both in São Paulo city, during the 2018 outbreak of the disease.

Between January 11 and May 10, 2018, 118 and 113 patients with suspected yellow fever were admitted to the Hospital das Clínicas and IIER-SP, respectively. After screening to confirm the diagnosis, 76 patients (68 men and eight women) with yellow fever were included in the study.

“Infection by yellow fever virus was confirmed using real-time PCR [polymerase chain reaction] testing of blood samples taken at admission or from tissue during autopsy. We performed whole-genome sequencing on the yellow fever viruses obtained from the infected individuals and assessed demographic, clinical and lab test data at admission. We investigated whether any of these measures correlated with patient death,” Kallás said.

The researchers found that the older the patient, the more severe the yellow fever illness tended to be. “This is intuitive. It makes sense that older people suffer more and are likely to have a worse prognosis. There’s a high probability that the condition in elderly patients will worsen,” Kallás said.

“The organism may be trying to combat something other than the yellow fever virus,” Kallás said. “Our hypothesis is that the multiplication of the virus in intestinal cells releases gut bacteria into the bloodstream. This may be the factor that activates the immune system and increases neutrophil production. Another possibility is that the patient’s immune system becomes unbalanced and the condition is made more severe as a result.”

Increased viral load was one of the markers of severity identified by the study. “As in the case of advancing age, it seems logical that the patient’s prognosis worsens as the viral load increases, but it’s the first time anyone has verified this in a scientific study,” Kallás said.

On the other hand, the researchers found that yellowish skin color was not a marker of severity at the time of hospital admission.

“Yellowish skin color resulting from the destruction of liver cells by the virus appears only in the most severe cases. In our study, it wasn’t present at hospitalization in any of the patients who later died,” Kallás said.

According to Sabino, the study represents significant progress by enabling physicians “in the event of an outbreak of yellow fever such as the one now under way in Brazil, the worst in decades, to screen patients on arrival at health services to identify those who could potentially develop severe illness. Early admission to an intensive care unit increases the chances of survival.”

After decades of research on yellow fever, markers of mortality had not yet been found, even for patients in the most developed countries. “The major yellow fever epidemics that occurred in the advanced industrialized countries, which have more medical and scientific resources to identify such markers, happened decades ago, mostly before development of the vaccine, which began to be tested 80 years ago, before World War Two,” Kallás said.

In 2017, at the onset of the latest outbreak of yellow fever in Brazil, Kallás, Sabino and collaborators conducted a follow-up study of patients with dengue, chikungunya and Zika in an attempt to predict the transmission and distribution of these diseases, all of which are caused by arboviruses (arthropod-borne viruses).

“When the first signs of a yellow fever outbreak were detected, we quickly realized that we were in an ideal position to add yellow fever to the scope of our research with the aim of identifying factors that predicted the severity of the disease. Collaboration between IIER-SP and FM-USP’s hospital was crucial to making this contribution possible,” Kallás said.

“Put yourself in the shoes of a doctor examining a patient who’s been diagnosed with yellow fever and has just been hospitalized,” he said. “Until now, there was no way of knowing the patient’s probable prognosis. The medical staff had to wait and see whether the patient’s condition would deteriorate, and this typically happens very fast. Our findings will help clinical staff understand what happens to patients. A patient with all the markers of severity at the moment of admission runs the greatest risk of dying, so staff will be able to set priorities and allocate patients to intensive care rapidly.”

At the same time, resource allocation can be improved to prioritize laboratory tests that will be able to determine more accurately whether the patients are likely to get better or worse.