The quest for an ideal quantum bit 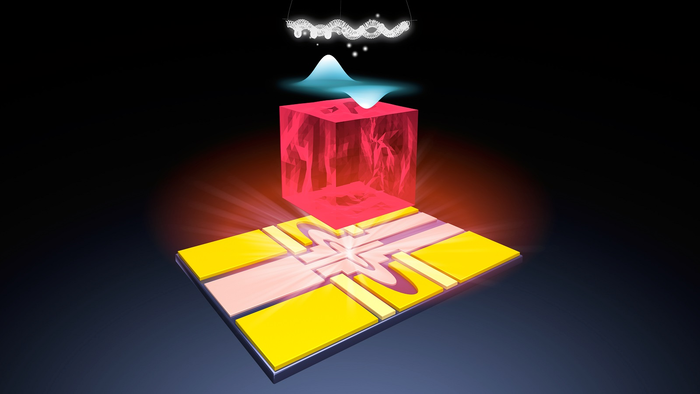 You are no doubt viewing this article on a digital device whose basic unit of information is the bit, either 0 or 1.  Scientists worldwide are racing to develop a new kind of computer based on use of quantum bits, or qubits.

In a recent Nature paper, a team led by the U.S. Department of Energy’s (DOE) Argonne National Laboratory has announced the creation of a new qubit platform formed by freezing neon gas into a solid at very low temperatures, spraying electrons from a light bulb’s filament onto the solid, and trapping a single electron there. This system shows great promise to be developed into ideal building blocks for future quantum computers.

“Our qubits are actually as good as ones that people have been developing for 20 years.” — David Schuster, physics professor at the University of Chicago and a senior co-author of the paper

To realize a useful quantum computer, the quality requirements for the qubits are extremely demanding. While there are various forms of qubits today, none of them is ideal.

What would make an ideal qubit? It has at least three sterling qualities, according to Dafei Jin, an Argonne scientist and the principal investigator of the project.

It can remain in a simultaneous 0 and 1 state (remember the cat!) over a long time. Scientists call this long ​“coherence.” Ideally, that time would be around a second, a time step that we can perceive on a home clock in our daily life.

Second, the qubit can be changed from one state to another in a short time. Ideally, that time would be around a billionth of a second (nanosecond), a time step of a classical computer clock.

Third, the qubit can be easily linked with many other qubits so they can work in parallel with each other. Scientists refer to this linking as entanglement.

Although at present the well-known qubits are not ideal, companies like IBM, Intel, Google, Honeywell and many startups have picked their favorite. They are aggressively pursuing technological improvement and commercialization.

​“Our ambitious goal is not to compete with those companies, but to discover and construct a fundamentally new qubit system that could lead to an ideal platform,” said Jin.

While there are many choices of qubit types, the team chose the simplest one — a single electron. Heating up a simple light filament you might find in a child’s toy can easily shoot out a boundless supply of electrons.

One of the challenges for any qubit, including the electron, is that it is very sensitive to disturbance from its surroundings. Thus, the team chose to trap an electron on an ultrapure solid neon surface in a vacuum.

Neon is one of a handful of inert elements that do not react with other elements. ​“Because of this inertness, solid neon can serve as the cleanest possible solid in a vacuum to host and protect any qubits from being disrupted,” said Jin.

A key component in the team’s qubit platform is a chip-scale microwave resonator made out of a superconductor. (The much larger home microwave oven is also a microwave resonator.) Superconductors — metals with no electrical resistance — allow electrons and photons to interact together at near to absolute zero with minimal loss of energy or information.

“The microwave resonator crucially provides a way to read out the state of the qubit,” said Kater Murch, physics professor at the Washington University in St. Louis and a senior co-author of the paper. ​“It concentrates the interaction between the qubit and microwave signal. This allows us to make measurements telling how well the qubit works.”

“With this platform, we achieved, for the first time ever, strong coupling between a single electron in a near-vacuum environment and a single microwave photon in the resonator,” said Xianjing Zhou, a postdoctoral appointee at Argonne and the first author of the paper. ​“This opens up the possibility to use microwave photons to control each electron qubit and link many of them in a quantum processor,” Zhou added.

The team tested the platform in a scientific instrument called a dilution refrigerator, which can reach temperatures as low as a mere 10 millidegrees above absolute zero. This instrument is one of many quantum capabilities in Argonne’s Center for Nanoscale Materials, a DOE Office of Science user facility.

The team performed real-time operations to an electron qubit and characterized its quantum properties. These tests demonstrated that the solid neon provides a robust environment for the electron with very low electric noise to disturb it. Most importantly, the qubit attained coherence times in the quantum state competitive with state-of-the-art qubits.

“Our qubits are actually as good as ones that people have been developing for 20 years,” said David Schuster, physics professor at the University of Chicago and a senior co-author of the paper. ​“This is only our first series of experiments. Our qubit platform is nowhere near optimized. We will continue improving the coherence times. And because the operation speed of this qubit platform is extremely fast, only several nanoseconds, the promise to scale it up to many entangled qubits is significant.”

There is yet one more advantage to this remarkable qubit platform. ​“Thanks to the relative simplicity of the electron-on-neon platform, it should lend itself to easy manufacture at low cost,” Jin said. ​“It would appear an ideal qubit may be on the horizon.”

The team published their findings in a Nature article titled ​“Single electrons on solid neon as a solid-state qubit platform.” In addition to Jin and Zhou, Argonne contributors include Xufeng Zhang, Xu Han, Xinhao Li and Ralu Divan. In addition to David Schuster, the University of Chicago contributors also include Brennan Dizdar. In addition to Kater Murch of Washington University in St. Louis, other researchers include Wei Guo of Florida State University, Gerwin Koolstra of Lawrence Berkeley National Laboratory and Ge Yang of Massachusetts Institute of Technology.

Funding for the Argonne research primarily came from the DOE Office of Basic Energy Sciences, Argonne’s Laboratory Directed Research and Development program and the Julian Schwinger Foundation for Physics Research.

About Argonne’s Center for Nanoscale Materials
The Center for Nanoscale Materials is one of the five DOE Nanoscale Science Research Centers, premier national user facilities for interdisciplinary research at the nanoscale supported by the DOE Office of Science. Together the NSRCs comprise a suite of complementary facilities that provide researchers with state-of-the-art capabilities to fabricate, process, characterize and model nanoscale materials, and constitute the largest infrastructure investment of the National Nanotechnology Initiative. The NSRCs are located at DOE’s Argonne, Brookhaven, Lawrence Berkeley, Oak Ridge, Sandia and Los Alamos National Laboratories. For more information about the DOE NSRCs, please visit https://​sci​ence​.osti​.gov/​U​s​e​r​-​F​a​c​i​l​i​t​i​e​s​/​U​s​e​r​-​F​a​c​i​l​i​t​i​e​s​-​a​t​-​a​-​G​lance.

Single electrons on solid neon as a solid-state qubit platform