The power of chaos: a robust and low-cost cryptosystem for the post-quantum era

While for most of us cryptographic systems are things that just run “under the hood,” they are an essential element in the world of digital communications. However, the upcoming rise of quantum computers could shake the field of cryptography to its core. Fast algorithms running on these machines could break some of the most widely used cryptosystems, rendering them vulnerable. Well aware of this looming threat, cryptography researchers worldwide are working on novel encryption methods that can withstand attacks from quantum computers. 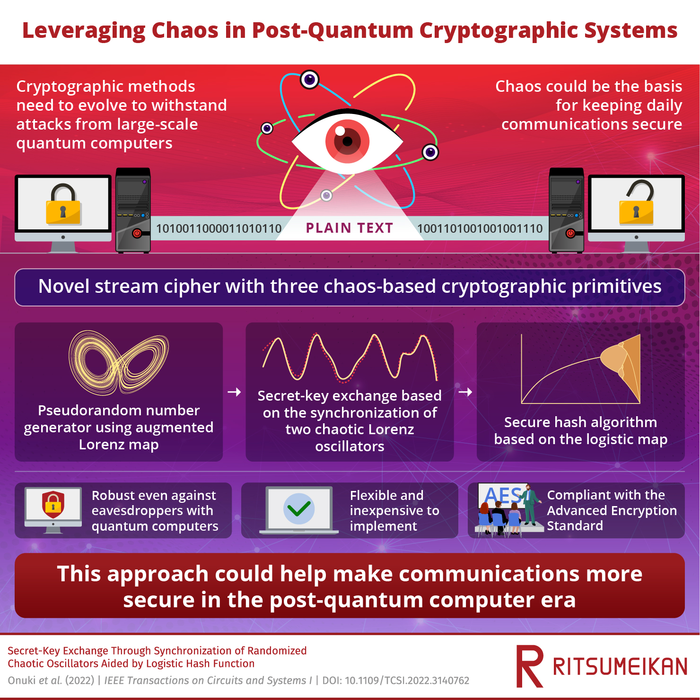 While for most of us cryptographic systems are things that just run “under the hood,” they are an essential element in the world of digital communications. However, the upcoming rise of quantum computers could shake the field of cryptography to its core. Fast algorithms running on these machines could break some of the most widely used cryptosystems, rendering them vulnerable. Well aware of this looming threat, cryptography researchers worldwide are working on novel encryption methods that can withstand attacks from quantum computers.

Chaos theory is actively being studied as a basis for post-quantum era cryptosystems. In mathematics, chaos is a property of certain dynamic systems that makes them extremely sensitive to initial conditions. While technically deterministic (non-random), these systems evolve in such complex ways that predicting their long-term state with incomplete information is practically impossible, since even small rounding errors in the initial conditions yield diverging results. This unique characteristic of chaotic systems can be leveraged to produce highly secure cryptographic systems, as a team of researchers from Ritsumeikan University, Japan, showed in a recent study published in IEEE Transactions on Circuits and Systems I.

Led by Professor Takaya Miyano, the team developed an unprecedented stream cipher consisting of three cryptographic primitives based on independent mathematical models of chaos. The first primitive is a pseudorandom number generator based on the augmented Lorenz (AL) map. The pseudorandom numbers produced using this approach are used to create key streams for encrypting/decrypting messages, which take the stage in the second and perhaps most remarkable primitive—an innovative method for secret-key exchange.

This novel strategy for exchanging secret keys specifying the AL map is based on the synchronization of two chaotic Lorenz oscillators, which can be independently and randomly initialized by the two communicating users, without either of them knowing the state of the other’s oscillator. To conceal the internal states of these oscillators, the communicating users (the sender and the receiver) mask the value of one of the variables of their oscillator by multiplying it with a locally generated random number. The masked value of the sender is then sent to receiver and vice-versa. After a short time, when these back-and-forth exchanges cause both oscillators to sync up almost perfectly to the same state in spite of the randomization of the variables, the users can mask and exchange secret keys and then locally unmask them with simple calculations.

Finally, the third primitive is a hash function based on the logistic map (a chaotic equation of motion), which allows the sender to send a hash value and, in turn, allows the receiver to ensure that the received secret key is correct, i.e., the chaotic oscillators were synchronized properly.

The researchers showed that a stream cipher assembled using these three primitives is extremely secure and resistant to statistical attacks and eavesdropping since it is mathematically impossible to synchronize their own oscillator to either the sender’s or the receiver’s ones. This is an unprecedented achievement, as Prof. Miyano states: “Most chaos-based cryptosystems can be broken by attacks using classical computers within a practically short time. In contrast, our methods, especially the one for secret-key exchange, appear to be robust against such attacks and, more importantly, even hard to break using quantum computers.”

In addition to its security, the proposed key exchange method is applicable to existing block ciphers, such as the widely used Advanced Encryption Standard (AES). Moreover, the researchers could implement their chaos-based stream cipher on the Raspberry Pi 4, a small-scale computer, using Python 3.8. They even used it to securely transmit a famous painting by Johannes Vermeer between Kusatsu and Sendai, two places in Japan 600 km apart. “The implementation and running costs of our cryptosystem are remarkably low compared with those of quantum cryptography,” highlights Prof. Miyano, “Our work thus provides a cryptographic approach that guarantees the privacy of daily communications between people all over the world in the post-quantum era.”

With such power of chaos-based cryptography, we may not have much to worry about the dark sides of quantum computing.

An eminent private university located in western Japan, Ritsumeikan University is constantly accelerating its efforts toward being a research-intensive institute. In the fiscal year 2020, Ritsumeikan was ranked third among private universities in terms of both the number and the total amount of Grants-in-Aid for Scientific Research awarded by the Japanese government. It has the distinction of being the first university in Japan to have been rated by QS Stars as a four-star institution, while also receiving a five-star rating in internationalization. It has also performed the best among Japanese private universities in the Impact Rankings for two consecutive years.

Dr. Takaya Miyano obtained his Ph.D. in Chemistry at Kyoto University in 1985. He is currently a Professor at the Department of Mechanical Engineering, Faculty of Science and Engineering, at Ritsumeikan University. His research at the Intelligent Microsystems Laboratory focuses on chaos, nonlinear dynamics, time series analysis, artificial intelligence, and drug delivery systems. He has well over 110 publications to his name, including papers in peer-reviewed journals and academic conference presentations.

IEEE Transactions on Circuits and Systems