The mysterious mechanics of morphogenesis

Tissue engineering—creating a “seed” of tissue that could grow into a functional, life-saving organ—sounds like magic. But it could become technology, thanks in part to the work led by Lance Davidson, William Kepler Whiteford Professor of Bioengineering at the University of Pittsburgh. 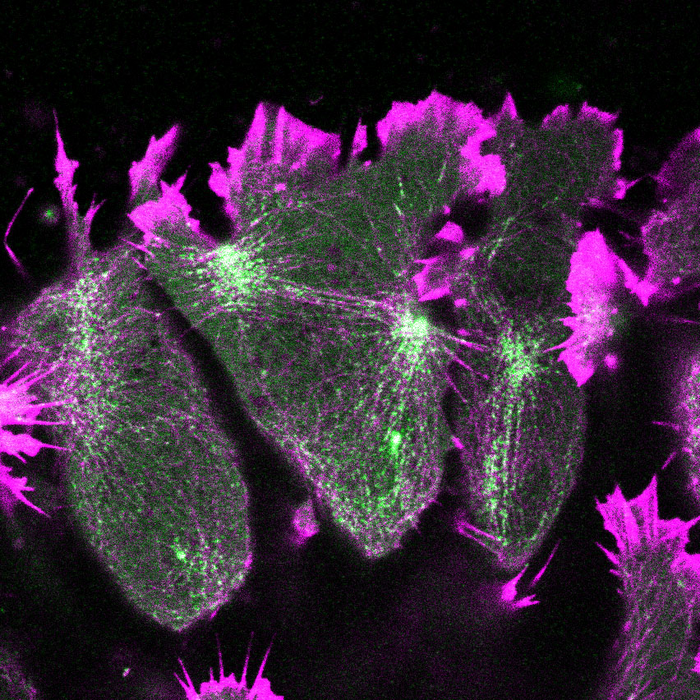 Tissue engineering—creating a “seed” of tissue that could grow into a functional, life-saving organ—sounds like magic. But it could become technology, thanks in part to the work led by Lance Davidson, William Kepler Whiteford Professor of Bioengineering at the University of Pittsburgh.

Davidson’s MechMorpho lab in the Swanson School of Engineering works at the interface of physics and biology to understand both biological and physical principles of morphogenesis: the development of embryonic form in the frog embryo. The work not only lays the groundwork to better understand human cell and tissue development but also has implications for furthering tissue engineering, preventing birth defects, and understanding the effect of tissue mechanics on cancer cell growth and proliferation. The National Institutes of Health recently awarded Davidson a MERIT (Method to Extend Research in Time) Award of $2.2 million to carry out this work.

“We’re trying to understand, from a physical perspective, how organisms and their organs form,” said Davidson. “Development is commonly viewed as a cascade of biochemical reactions that “magically” generate the body and organs of the embryo. Our group seeks to open up that magic black box and understand how physical processes convert those reactions into work and living structures.”

The MERIT award is a highly prestigious award provided by the NIH to only the most outstanding scientists. The five-year grant — with an opportunity to renew for another five years, based on progress made in the first five years — allows recipients to focus more on their research and less on the need to continually seek renewed funding.

“Lance’s research on how cellular biomechanics contributes to the development of organisms at the cellular and tissue levels has wide-ranging implications for human health,” said Mark Redfern, professor and interim department chair of bioengineering. “This MERIT award is recognition by NIH of the importance of this work and the potential for new breakthroughs in the future. The very competitive award is well-deserved.”

The MechMorpho Lab’s long term goal is to reverse-engineer the embryo and organ formation.

“There are a diverse set of chemical and physical pathways that regulate morphogenesis and that interact with the environment. In this project we want to understand how passive mechanics and active forces shape tissues in an early vertebrate embryo,” said Davidson. “We aim to understand the coupling between cell biological and physical mechanisms that drive cell shape changes, control cell behaviors, generate forces, and create tissue properties like stiffness.”

Convergent extension — the process by which an embryo elongates from a simple clump of cells and begins to take on the shape of its eventual body — is crucial to a vertebrate’s development. If the convergent extension process goes wrong, it often leads to developmental defects in organs and overall anatomy.

Understanding the mechanical basis of this process is a central question in the field of developmental biology. It gives fresh insights into the fundamental principles of organ development and how a tissue assembles itself as it grows and regenerates.

To study this process, Davidson’s mainly lab relies on frog embryos before they are recognizable as tadpoles. Frogs share a surprising amount of DNA with humans but develop much more quickly. In previous work, Davidson and his team were able to characterize the dynamics of key mechanical properties and the proteins involved in morphogenesis. They used confocal  microscopy to observe protein complexes within living cells in an embryo on a sub-micron scale, finding that events happening on this microscopic level have a major impact on large-scale events.

Organ growth can follow mechanical clues from their environment, but researchers don’t yet know how those clues are stored or how they dissipate. At the intersection of developmental biology and bioengineering, Davidson is in a unique position to understand these important processes.

In this project, the team will dig deeper and understand how tissues are storing mechanical information.

“If genes are interacting with mechanics, the mechanics have to be able to hang around in a way that can be sensed by genetic pathways,” explained Davidson. “If mechanical stresses dissipate quickly, it is like a mechanical form of amnesia with cells forgetting their past and possibly resetting their biological processes to an earlier state.”

Reverse engineering organ and tissue development will be a great advance in tissue engineering, but it can also lead to medical interventions to better diagnosis and treatment.

“A great number of human diseases are associated with defects in mechanical signaling pathways,” explained Davidson. “Cardiovascular disease, for example, is thought to be triggered by defects in how cells interact with blood flow.”

The spread of cancer is also clearly dependent on mechanics, Davidson said, as cells are triggered to migrate out of a tumor by the mechanical microenvironment that surrounds them. “If you can modulate the environment around a tumor, and keep it in a softer state, the cells might just stay put,” he said.

This knowledge will give researchers a better basis to understand birth defects and their risk factors. For example, in spina bifida there are genetic risk factors but the mechanisms that cause them to manifest are unknown. If there is a clear mechanical element to the risk, future research could identify ways to offset this risk with medication.

“Our work opens the door for researchers to develop new hypotheses of morphogenesis and bioengineering tools to test them,” said Davidson. “With a better understanding of the role of mechanics in development, we can understand so much more about the human body and how we can overcome some of its most significant ailments.”