The micro-environment of breast cancer in three dimensions 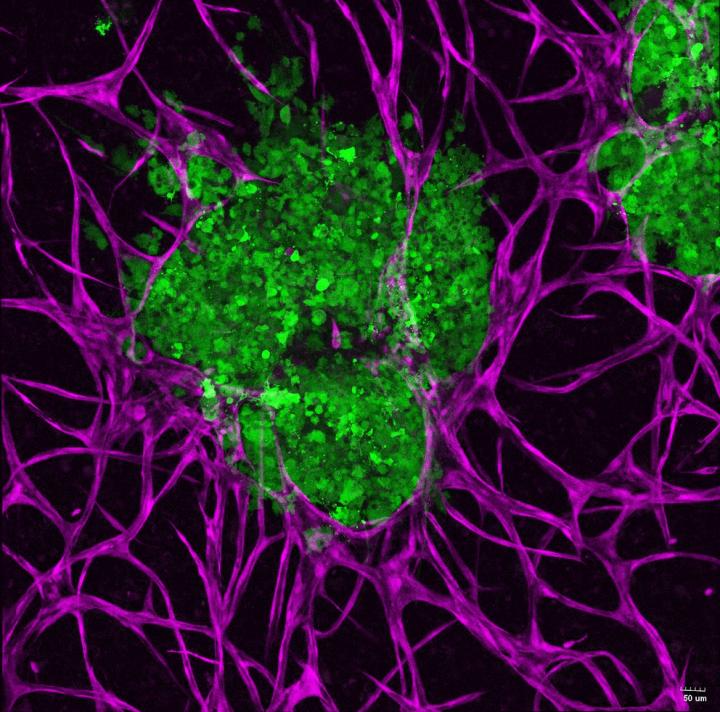 Cancerous tumors thrive on blood, extending their roots deep into the fabric of the tissue of their host. They alter the genetics of surrounding cells and evolve to avoid the protective attacks of immune cells. Now, Penn State researchers have developed a way to study the relationship between solid, difficult-to-treat tumors and the microenvironment they create to support their growth.

The method has the potential to act as a testbed for drugs and other anticancer treatments, according to Ibrahim T. Ozbolat, associate professor of engineering science and mechanics and biomedical engineering, who led the research. The details of the approach were published in Advanced Biology.

Using metastatic triple-negative breast cancer cells — the most aggressive breast cancer, for which there are few treatments — and specialized modeling techniques, the researchers cultivated tumor microenvironments.

“We brought together the tumor and its microenvironment and studied how the embedded tumor affects its surrounding matrix,” said Madhuri Dey, first author on the paper and a doctoral student in the Department of Chemistry in the Eberly College of Science. “Then we asked if we could get any meaningful genetic information from this composite system.”

Typically, researchers examine the genetic information of single cells in a system to understand which signals are being sent and received to encourage specific behaviors. However, Dey said, the individual actions may not reveal every facet of a composite system.

“We looked at the genome of the entire system,” Dey said. “The result was a far more representative understanding of how cells talk to each other in the native conditions.”

They found that the physiological changes in tumor behavior — such as growth or movement — are a direct result of cellular communication in the tumor’s microenvironment. Cancer cells communicate with the cells lining blood vessels, called endothelial cells, that also control the exchange of materials between blood and the extracellular environment. Cancer also communicates with the cells that secrete collagen to produce the scaffolding of tissues, called fibroblasts.

“The cancer-endothelial cell crosstalk is equally important as the cancer-fibroblast crosstalk,” Dey said, noting that each process can influence the other and change how the cancer grows.

To test their approach, the researchers 3D-bioprinted tumor models called spheroids in a microenvironment to see how distance might influence tumor growth.

“We asked, ‘Can proximity increase cancer aggressiveness?’ and we found that there is a critical distance,” Dey said. “Tumors far apart don’t affect each other, but endothelial cells from neighboring tumors can nourish each other and increase how aggressively the cancer spreads.”

Next, the researchers plan to use the fabrication method to investigate how immune cells engineered to target cancer cells can be improved to penetrate solid tumors and limit their spread.

“We could also use this as a personalized tool to test treatment effectiveness for individual people — that’s a future goal,” Ozbolat said. “There are so many ways in which we can apply this tumor microenvironment model.”

Co-authors include Bugra Ayan, who earned his doctorate from Penn State in engineering science and mechanics in 2020 and is now a postdoctoral fellow at Stanford University; and Marina Yurieva and Derya Unutmaz, both with the Jackson Laboratory for Genomic Medicine and University of Connecticut Health Center. Ozbolat, Dey and Ayan are also affiliated with the Huck Institutes of the Life Sciences and the Materials Research Institute.

The National Cancer Institute and the National Science Foundation’s Division of Civil, Mechanical and Manufacturing Innovation funded this work.