The making of ‘warm ice’ 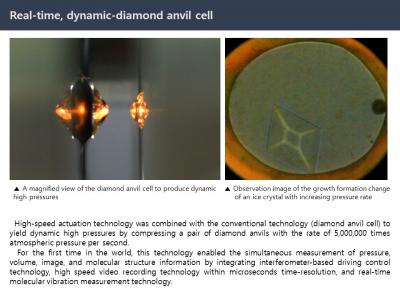 Can water freeze at room temperature or even higher temperatures at which ordinary water boils? Formation of so-called “Warm Ice” maybe an unfamiliar phenomenon to the general public and yet can be made possible by controlling the crystallization process in which liquid turns into a solid. In principle, such manipulation could be achieved not only by changing temperature but also pressure. However, the latter requires exerting extreme level of pressure (10,000 times the atmospheric pressure) on water.

The Center for Convergence Property Measurement, Frontier in Extreme Physics Team at Korea Research Institute of Standards and Science (KRISS, President Sang-Ryoul Park) succeeded in creating room-temperature ice and controlling its growth behaviors by dynamically compressing water up to pressures above 10,000 atmospheres. By systematically varying the compression rates, the research team discovered a sudden morphological crossover from 3-dimensional to 2-dimensional ice. Rigorous investigation unveiled the underlying mechanism of the anomalous growth transition which is manifested in the forms of shape- and growth speed changes of ice. Such high-pressure technology and phenomena can have significant impact on a wide range of practical applications – biology, foods, medical, and aerospace.

Ice observed in nature has more than 10,000 crystals including hexagonal plates, columns, and dendrites. Such ice crystals of various forms induce curiosity about nature as well as having significant industrial applications. Especially, controlling ice crystals with pressure rather than temperature can resolve existing problems of ice, so there is great interest in this endeavor.

A representative example is foods. When meat is frozen at regular atmospheric pressure, hexagonal plate ice crystals with needle-like corners are created, and cause damages of the cells and tissue. This is why meat from the freezer is less juicy and does not taste as good as unfrozen meat. However, when meat is frozen at high pressure, ice crystals of different shapes that are not sharp in corners are produced, protecting the quality of the meat.

Ice formed on airplanes can cause aircraft defects and accidents. On days with snow and at an altitude of 10,000 m, where the temperature falls below 40? below zero, ice forms on aircraft wings. When ice crystals are formed abnormally, the wing shape changes, degrading the lift. Thus, control of the growth rate and form of ice crystals greatly affects the safety and operation efficiency of aircraft.

KRISS Principal Research Scientists Yun-Hee Lee, Sooheyong Lee, and Geun Woo Lee developed a “real-time dynamic diamond anvil cell” device that can apply pressures up to 5,000,000 times that of atmospheric pressure per second and applied the device to study ice growth under high pressures. As a result, the research team succeeded in compressing water at room temperature to produce high pressure ice and succeeded in transforming 3-dimensional octahedron ice into a 2-dimensional wing shape ice through dynamic pressure control.

The focus of similar research has conventionally been on the control of temperature and concentration; clear observation of fast crystal growth was not possible due to time delay from inevitable thermal and mass diffusion. On the other hand, pressure allowed for immediate and uniform application and overcoming of existing limitations so that the crystallization process of water molecules can be understood in detail and controlled.

KRISS Principal Research Scientist Yun-Hee Lee said, “application of high-pressure freezing technology can lead to new forms of ice crystals and freezing processes to maintain the taste and freshness of foods. Applying this technology to the cold chain system currently used in the logistics of fresh foods is expected to further improve the marketability of foods.”

KRISS Principal Research Scientist Geun Woo Lee explained that “this technology can be applied to analyze various crystalline structures; the range of application fields is infinite.” Also, Principal Research Scientist Sooheyong Lee continued, “new material characteristics can be discovered under extreme environments like those of extremely high pressure, so science and technologies that have reached limits can be pushed further towards new dimensions.”

Through support from the Ministry of Science and ICT, this research accomplishment was published in the Proceedings of National Academy of Sciences (PNAS, IF 9.661), which is one of the three leading global academic journals.

LGBTI adolescents and young adults with cancer: Can we do better?

Speeding the development of fusion power to create unlimited energy on…