The number of reported cases using viruses to treat deadly Mycobacterium infections just went up by a factor of five. In a new study, a team led by researchers from the University of Pittsburgh and the University of California San Diego report 20 new case studies on the use of the experimental treatment, showing the therapy’s success in more than half of the patients. 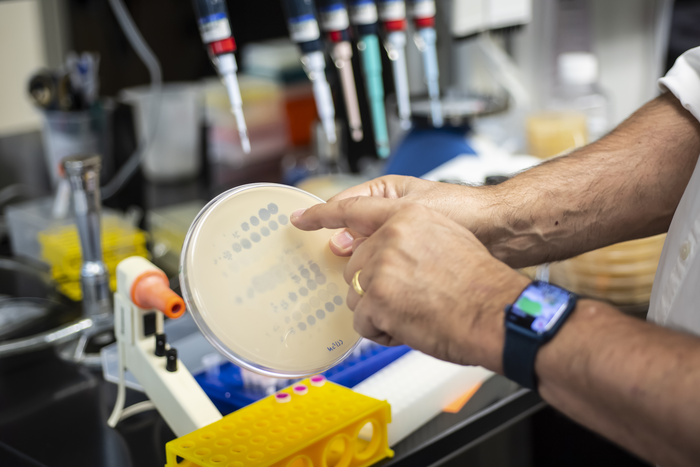 The number of reported cases using viruses to treat deadly Mycobacterium infections just went up by a factor of five. In a new study, a team led by researchers from the University of Pittsburgh and the University of California San Diego report 20 new case studies on the use of the experimental treatment, showing the therapy’s success in more than half of the patients.

It’s the largest ever set of published case studies for therapy using bacteria-killing viruses known as bacteriophages, providing unprecedented detail on their use to treat dire infections while laying the groundwork for a future clinical trial.

“Some of those are spectacular outcomes, and others are complicated,” said Graham Hatfull, the Eberly Family Professor of Biotechnology in the Kenneth P. Dietrich School of Arts and Sciences at the University of Pittsburgh. “But when we do 20 cases, it becomes much more compelling that the phages are contributing to favorable outcomes — and in patients who have no other alternatives.”

Each patient treated in the study was infected with one or more strains of Mycobacterium, a group of bacteria that can cause deadly, treatment-resistant infections in those with compromised immune systems or with the lung disorder cystic fibrosis. In 2019, Hatfull led a team showing the first successful use of phages to treat one of these infections.

“For clinicians, these are really a nightmare: They’re not as common as some other types of infections, but they’re amongst some of the most difficult to treat with antibiotics,” said Hatfull. “And especially when you take these antibiotics over extended periods of time, they’re toxic or not very well-tolerated.”

Last month, the University of Pittsburgh researchers were involved in two new case studies successfully treating patients in collaboration with colleagues at National Jewish Health and Harvard University. But those reports represent only a fraction of the cases the team has been involved in behind the scenes. Since 2019, Hatfull and his lab have fielded requests from more than 200 clinicians looking for treatments for their patients, working with them to find phages that could be effective against the particular strain of bacteria infecting each patient.

The newest paper, published today in the journal Clinical Infectious Diseases alongside collaborators from 20 institutions, dramatically scales up the body of published evidence on the effectiveness of the therapy.

“These are incredibly brave physicians, jumping off the ledge to do an experimental therapy to try to help patients who have no other options,” said Hatfull. “And each of these collaborations represents a marker that can move the field forward.”

Looking at measures of patient health and whether samples from the patient still showed signs of Mycobacterium infections, the team found that the therapy was successful in 11 out of 20 cases. No patients showed any adverse reactions to the treatment.

In another five patients the results of the therapy were inconclusive, and four patients showed no improvement. According to Hatfull, even these apparent failures are key to making the therapy available to more patients. “In some ways, those are the most interesting cases,” he said. “Understanding why they didn’t work is going to be important.”

Several unexpected patterns emerged from the case studies. In 11 cases, researchers were unable to find more than one kind of phage that could kill the patient’s infection, even though standard practice would be to inject a cocktail of different viruses so the bacteria would be less likely to evolve resistance.

“If you’d asked me whether that was a good idea three years ago, I would have had a fit,” Hatfull said. “But we just didn’t observe resistance, and we didn’t see a failure of treatment from resistance even when using only a single phage.”

In addition, the team saw that some patients’ immune systems attacked the viruses, but only in a few cases did their immune systems render the virus ineffective. And in some instances, the treatment was still successful despite such an immune reaction. The study paints an encouraging picture for the therapy, said Hatfull, and one that opens the possibility for new phage regimens that clinicians could use to maximize the treatment’s chance of success.

Along with the study’s significance to patients facing Mycobacterium infections, it also represents a substantial advance for the wider field of phage therapy. A concern in some corners is that researchers may be only publishing case studies in which phage therapy is successful.

“A series of consecutive case studies, where we’re not cherry-picking, is a much more transparent way of looking to see what works and what doesn’t,” said Hatfull. “This adds considerable weight to the sense that the therapy is safe.”

The lab continues to provide phages for more patients — while at the same time conducting research to widen the funnel that narrowed an initial group of 200 patients down to 20, in the hopes of providing treatment to more people with no other options.

“We’ve not yet figured out how to find or engineer phages that will get every strain of bacteria in these patients,” said Hatfull. “That represents one of the major challenges ahead.”

Hatfull is a consultant for and receives grant support for work not directly related to this from Janssen Pharmaceuticals. Dedrick and Hatfull are co-inventors on patent applications related to the use of phages for treating NTM infections filed by the University of Pittsburgh of the Commonwealth System of Higher Education. Van Duin is a consultant for Actavis, Tetraphase, Sanofi-Pasteur, MedImmune, Astellas, Merck, Allergan, T2Biosystems, Roche, Achaogen, Neumedicine, Shionogi, Pfizer, Entasis, QPex, Wellspring, Karius and Utility; receives an editor’s stipend from BSAC; and funding for unrelated projects from the NIH, Merck and Shionogi. Cohen has received consulting fees from Insmed, Hillrom, Paratek, Microbion and AN2. Haidar receives grant support unrelated to this study from Karius and Allovir. Schooley is a paid consultant to VIR Biotechnology and to LysNtech and has stock options in Antiva Biosciences and CytoDyn; he previously served as an uncompensated member of the AmpliPhi Scientific Advisory Board.