The involvement of the gut in Parkinson’s disease: hype or hope?

Experts review evidence that, at least in some patients, the disease may begin in the gut, and examine key research issues needing resolution, in a special supplement to the Journal of Parkinson’s Disease 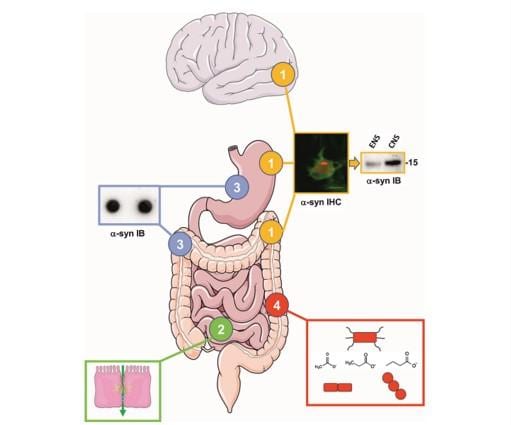 Amsterdam, NL, February 7, 2019 – There is growing evidence that at least in some patients with Parkinson’s disease (PD), the disease may begin in the gut. Writing in a special supplement to the Journal of Parkinson’s Disease, experts explore the last two decades of research about the gut-brain axis in PD and look ahead at the possible development and impact of these research areas in the next two decades.

PD is a slowly progressive disorder that affects movement, muscle control, and balance. In the last 20 years it has become clear that PD is associated with a number of gastrointestinal symptoms originating from functional and structural changes in the gut and its associated neural structures. Many patients with PD suffer from gut-related symptoms such as constipation, which have an impact on quality of life. Accumulating evidence suggests that in at least a subgroup of patients, these disturbances happen years before the development of motor symptoms and diagnosis of PD and may therefore provide important insights into the origin and development of the disease.

“Better understanding the role of the gut in PD will help us to understand the origin of the disease and to improve treatments,” explained Filip Scheperjans, MD, PhD, from the Department of Neurology, Helsinki University Hospital, Helsinki, Finland, and colleagues. “There is accumulating evidence that at least in some PD patients, the origin of the disease may lie in the gut with possible involvement of abnormal protein aggregates, local inflammation, and the gut microbiome. Therefore, further studies into the role of the gut in PD are important and may reveal new possibilities for diagnosis and treatment.”

The authors predict that major advances will be made over the next 20 years in understanding the role of gastrointestinal alpha-synuclein pathology in the etiology of PD and explaining the degree of similarity between pathophysiological processes in PD and those of true prion diseases such as Creutzfeldt-Jakob disease. Accessible and affordable methods such as radio-opaque markers to assess gastrointestinal transit times will find more widespread use in future studies. They believe there is good reason to envision that gut microbiota may have important implications in the future diagnostic and therapeutic landscape of PD and that therapeutic applications based on the gut microbiome are possible through a range of approaches, including dietary interventions, probiotics, prebiotics, and fecal microbiota transplantation. And finally, that a more detailed understanding of microbiome-host-interactions in PD could identify new pathways that could be targeted using more traditional pharmacological approaches.

“Our understanding and appreciation of the importance of the gut-brain connection in PD has grown rapidly in recent years. We are confident that the coming two decades of microbiome-gut-brain-axis research will see an even accelerated development in this area that will reshape our understanding of the pathogenesis of PD,” concluded Dr. Scheperjans.

“The gut has emerged as one of the new frontiers in PD research,” commented Patrik Brundin, MD, PhD, Van Andel Research Institute, Grand Rapids, MI, USA, and J. William Langston, MD, Stanford Udall Center, Department of Pathology, Stanford University, Palo Alto, CA, USA, Editors-in-Chief of the Journal of Parkinson’s Disease. “We predict there will be several advances regarding the gut in the coming 20 years. Changes in the gut might be utilized to diagnose PD earlier; new therapies targeting these changes might slow disease progression, reduce constipation, and improve gut function in patients who have already been diagnosed.”

Scienmag Nov 4, 2019
For the first time, transparent conductive circuits made of silver nanowires used to make rigid and flexible…

Life could have emerged from lakes with high phosphorus