The importance of DNA compaction in tissue formation 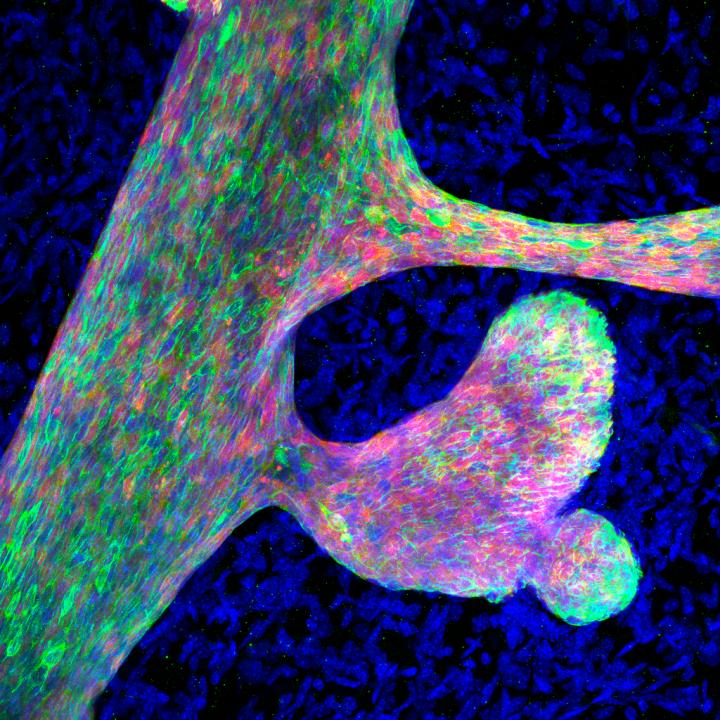 Scientists led by Dr. Salvador Aznar-Benitah, head of the Stem Cells and Cancer laboratory at IRB Barcelona, have described the alterations that occur during mammary gland formation when heterochromatin (the part of DNA that does not actively produce proteins) is poorly regulated. The results, which have been published in the journal Cell Stem Cell, indicate that incorrect DNA packaging makes retrotransposons (a type of transposable element originated in ancestral fragments of viruses integrated into the cell genome) more accessible.

As these fragments are more accessible, they can be “read” and copied by the cellular machinery. The cell reacts to the presence of these viral fragments as if it was undergoing infection and it triggers an immune response through a cellular program called pyroptosis. As a result, the interactions between different cells are altered within the breast, leading to complete failure to performs its primary function of milk secretion.

“In many types of cancer, such as triple-negative breast cancer, we observe that there are regions of the genome that are unexpectedly unfolded and we need to understand the implications. The inflammatory response and the alterations that arise could play a key role in the ability of these cells to colonise other organs, causing what is known as metastasis,” explains Dr. Aznar-Benitah, ICREA researcher at IRB Barcelona.

The importance of DNA folding

The main function of the DNA in our cells is to coordinate the production of proteins responsible for executing cellular functions. However, some parts of the genome are tightly condensed and thus are not used for this purpose. This study and others published by the scientific community report that proper regulation of chromatin condensation is also key for the correct development of tissues.

The non-coding DNA of animals contains transposable elements, which are ancestral viruses that integrated into the genome a long time ago. If these elements are “read” and copied by the cellular machinery, it is detrimental for the cell. Therefore the cell has evolved mechanisms to protect itself. One of the mechanisms that prevents retroviral copying in healthy cells is chromatin compaction. In their recent work, Dr. Aznar-Benitah and colleagues demonstrated that disrupting this compaction and releasing these ancestral viruses is not only detrimental to the individual cell but has repercussions on the function of the whole tissue (and maybe even the organism).

Dr. Alexandra Avgustinova, first author of the article and IRB Barcelona Alumna, has now set up her own laboratory in the Paediatric Cancer programme at the Institut de Recerca Sant Joan de Déu (IRSD). Her group addresses the regulation of the genome at the onset of paediatric cancer and, in this context, will study the influence of transposable elements like retrotransposons in the responsiveness of paediatric cancers to immunotherapy.

“I learnt a lot during my years at IRB Barcelona and had the opportunity to meet outstanding scientists with whom I would like to collaborate in the future. Working with Salva has taught me to “think big” and really pursue the questions that intrigue me, which will be very important when it comes to heading your own group!” says Dr. Avgustinova.

To carry out this research, scientists from IRB Barcelona’s Stem Cell and Cancer laboratory have had to develop a very complex study model: They employed computational tools capable of identifying the transposable elements that are being copied within a cell, in combination with a mouse model in which they could assess the functional consequences of disrupting chromatin compaction.

This study demonstrates that disrupting chromatin compaction can have repercussions that reach beyond the affected cell, and it paves the way for research into the metastatic processes of tumours with altered chromatin compaction and thus deregulation of transposable elements.

This research project has been possible thanks to funding from the European Research Council (ERC), the Government of Catalonia, the Ministry of Science and Innovation of the Government of Spain, La Marató/TV3 Foundation and the Worldwide Cancer Research Foundation (WCRF). The researchers also received support from the European Commission within the framework of Marie Sklodowska-Curie Actions, the Spanish Association Against Cancer (AECC), the Barcelona Institute for Science and Technology (BIST), the Max Planck Society, the Deutsche Forschungsgemeinschaft programme, and the Medical Research Council of the United Kingdom.