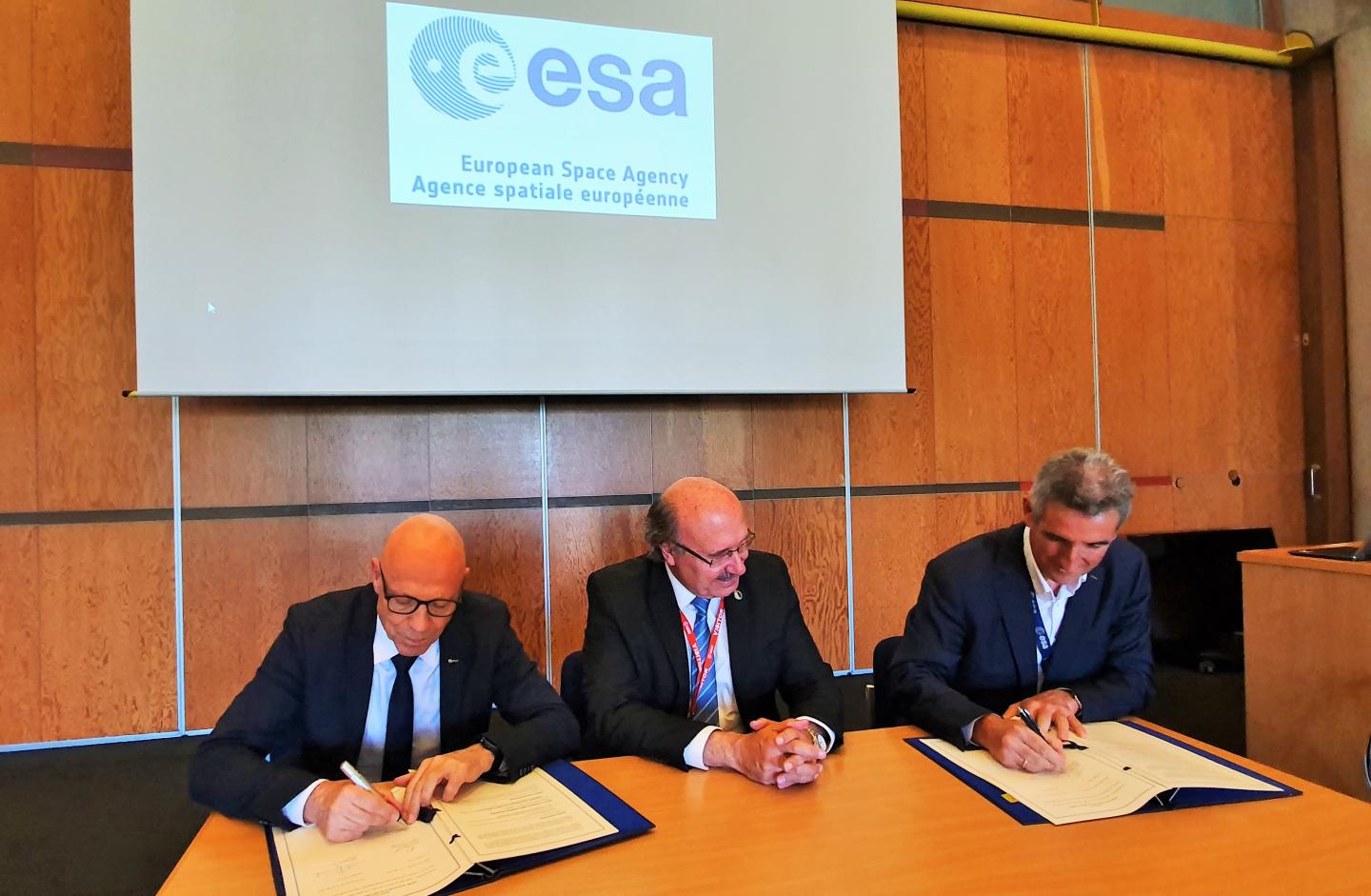 This afternoon the IAC and ESA signed an agreement by which the programmes of optical communication with space missions and the studies of space debris at the Teide Observatory, Izaña, Tenerife, will be widened. The agreement was signed at ESA’s European Centre for Space Research and Technology (ESA-ESTEC) at Noordwijk in the Netherlands, where tomorrow the 81st meeting of the International Scientific Committee (CCI, its initials in Spanish) of the Canary Observatories will take place

ESA intends to continue its development of optical terminals suitable for optical links to satellites, which entails the existence of an optical “anchor” station at one of the best astronomical sites in the world: the Teide Observatory in Tenerife. The IAC is also interested in continuing its developments in the field of optical communications in space.

ESA’s most important installation at the Teide Observatory is the Optical Ground Station (OGS). Equipped with a 1 m telescope, its initial purpose is to test on-orbit the laser telecommunications terminal son board satellites in low and in geostationary orbits. From 2001 it has also been tracking space debris in geostationary orbit and in the GEO transfer orbit. The OGS has a wide-field camera installed on the Richey-Chrétien focus of the telescope, designed and dedicated to this work. In addition a third of its observing time is used for astronomical research by teams from ESA and the IAC, who installed their instruments at the different foci of the telescope. Now, with this new agreement, ESA and the IAC are prepared to receive additional optical systems to those already on the telescope.

The agreement signed today with ESA precedes the 81st meeting of the International Scientific Committee (CCI , its Spanish Initials) of the Canary Island Observatories, which will take place tomorrow in Noordwijk, and which will celebrate the 40th anniversary of the signing of the Agreement with which these observatories and the IAC became international. The CCI is the mechanism through which the institutions which are members of the Observatories participate effectively in the decisions which affect the operation of the telescopes.

During tomorrow’s meeting the reports on future installations at the Canary Observatories will be presented. These include the 4 m New Robotic Telescope, and the European Solar Telescope (EST) also of 4m diameter. In addition there will be discussions on diverse aspects of the working of both Observatories, and the plans for meetings about future astrophysical instruments which will be installed on the existing telesocopes. The programme of assignments of the CCI telescope time will be presented, and the next meeting will be fixed, to take place in La Laguna, Tenerife, in the middle of November.

The IAC Observatories are part of the Network of Singular Scientific and Technial Infratructure (ICTS) of Spain.

As seen in movies, new meta-hologram can be used as a communication tool