The first frost is the deepest 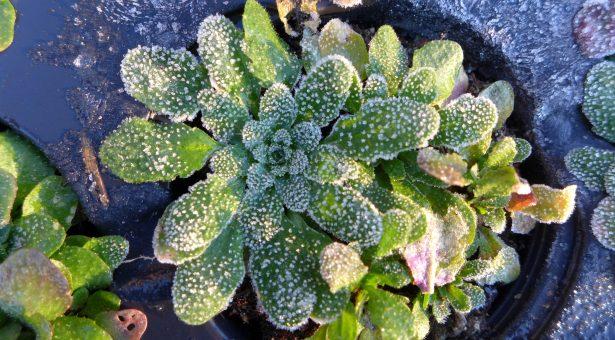 The first frost of autumn may be grim for gardeners but the latest evidence reveals it is a profound event in the life of plants.

The discovery may affect how we grow crops in a fluctuating climate and help us better understand molecular mechanisms in animals and humans.

Much of our understanding of how plants register temperature at a molecular level has been gained from the study of vernalization – the exposure to an extended period of cold as a preparation for flowering in spring.

Experiments using the model plant Arabidopsis have shown how this prolonged period of cold lifts the brake on flowering, a gene called FLC. This biochemical brake also involves another molecule COOLAIR which is antisense to FLC. This means it lies on the other strand of DNA to FLC and it can bind to FLC and influence its activity.

But less is known about how natural temperature changes affect this process. How does COOLAIR facilitate the shutdown of FLC in nature?

To find out, researchers from the John Innes Centre used naturally occurring types of Arabidopsis grown in different climates.

They measured how much COOLAIR is turned on in three different field sites with varying winter conditions, one in Norwich, UK, one in south Sweden and one in subarctic northern Sweden.

COOLAIR levels varied among different accessions and different locations. However, researchers spotted something that all the plants had in common – the first time the temperature dropped below freezing there was a peak in COOLAIR.

To confirm this boosting of COOLAIR after freezing they did experiments in temperature-controlled chambers which simulated the temperature changes seen in natural conditions.

They found COOLAIR expression levels rose within an hour of freezing and peaked about eight hours afterwards. There was a small reduction in FLC levels immediately after freezing too, reflecting the relationship between the two key molecular components.

Next, they found a mutant Arabidopsis which produces higher levels of COOLAIR all the time even when it is not cold, and low levels of FLC. When they edited the gene to switch off COOLAIR they found that FLC was no longer suppressed, providing further evidence of this elegant molecular mechanism.

Dr Yusheng Zhao, co-first author of the study said: “Our study shows a new aspect of temperature sensing in plants in natural field conditions. The first seasonal frost serves as an important indicator in autumn for winter arrival. The initial freezing dependent induction of COOLAIR appears to be an evolutionarily conserved feature in Arabidopsis and helps to explain how plants sense environmental signals to begin silencing of the major floral repressor FLC to align flowering with spring.”

The study offers insight into the plasticity in the molecular process of how plants sense temperatures which may help plants adapt to different climates.

Professor Dame Caroline Dean, corresponding author of the study explained: “From the plant’s point of view it gives you a tunable way of shutting off FLC. Any modulation of antisense will switch off sense and from an evolutionary perspective, depending on how efficiently or how fast this happens, and how many cells it happens in, you then have a way of dialing the brake up and down among cells.”

The findings will be helpful for understanding how plants and other organisms sense fluctuating environmental signals and could be translatable to improving crops at a time of climate change.

The discovery will also likely be widely relevant for environmental regulation of gene expression in many organisms because antisense transcription has been shown to alter transcription in yeast and human cells.