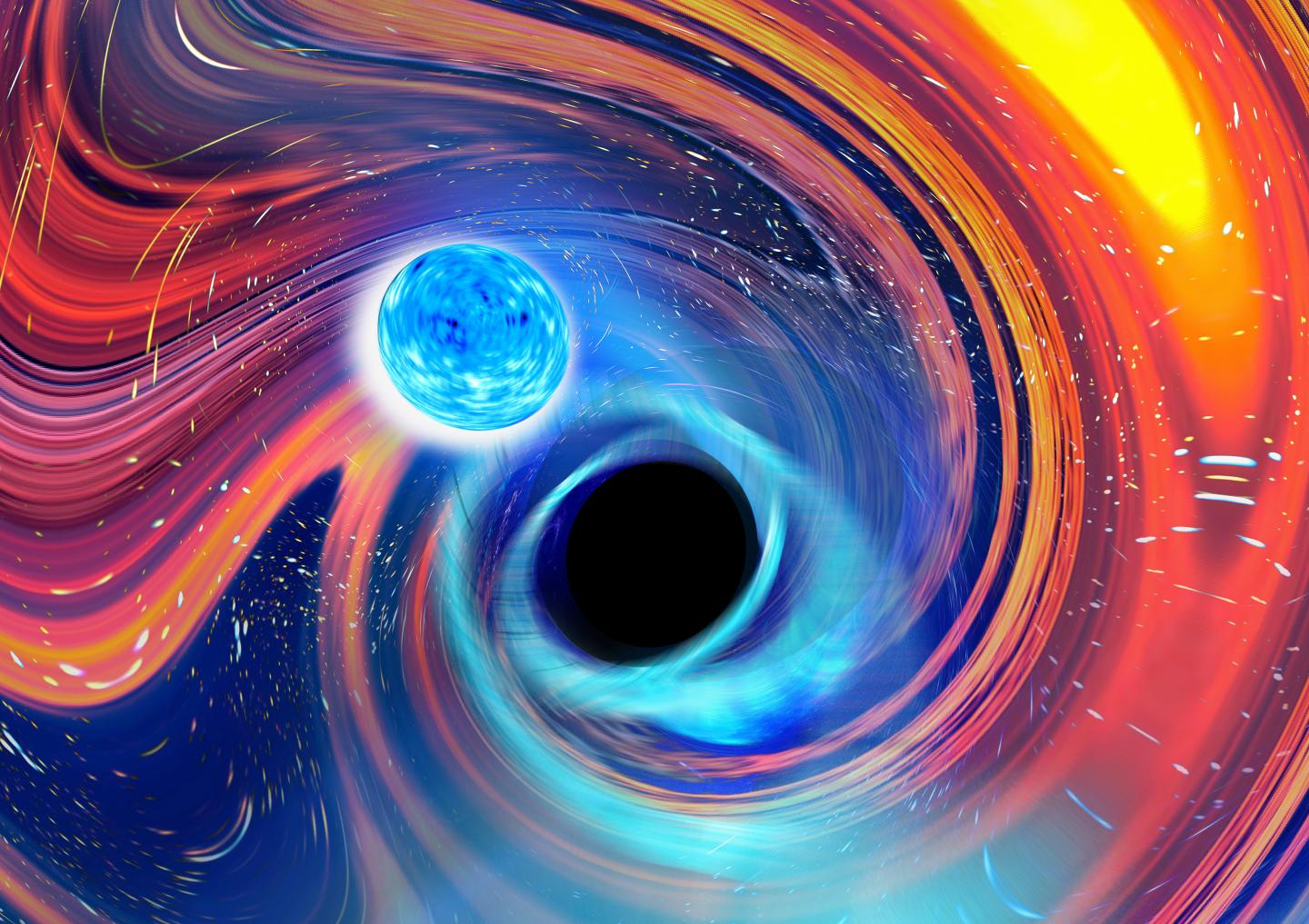 Another missing piece has just been added to our knowledge of cosmic phenomena. The LIGO, Virgo and KAGRA collaborations have announced the first detection of gravitational waves (1) resulting from the ‘mixed’ merger between a black hole and a neutron star (2). The discovery, published on June 29, 2021 in Astrophysical Journal Letters, involves CNRS researchers working within the Virgo scientific collaboration.

Although it has only been only a few years since the very first observation of gravitational waves, the technique has yielded an extensive repertoire of phenomena involving massive cosmic objects. The LIGO and Virgo detectors have already observed mergers of pairs (or binaries) of black holes and, less frequently, of neutron stars. However, gravitational waves detected in January 2020 provide evidence of the existence of a new type of system. The signals, named GW200105 and GW200115 from their dates of detection, were produced by a process that had been predicted but never observed until now: the coalescence of ‘mixed pairs’ called NSBH pairs, each made up of a neutron star and a black hole (3).

Gravitational waves contain valuable information about their source, such as the mass of the components making up the binary. Analysis of the signals revealed that GW200105 resulted from the merger, some 900 million years ago, of a black hole and a neutron star, respectively 8.9 times and 1.9 times more massive than the Sun, while GW200115 originated from an NSBH pair which coalesced around 1 billion years ago, with masses 5.7 and 1.5 times greater than the Sun. The difference in mass between the components of the system indicates that they are indeed mixed binaries: the mass of the heavier object corresponds to that of a black hole while the mass of the lighter object is consistent with that of a neutron star. The difference between the two masses could also explain why no light signals were detected by telescopes. When a neutron star approaches a black hole it can theoretically be torn apart by tidal forces, causing flares of electromagnetic radiation. However, in the two cases observed, the black hole, being much more massive, could have gobbled up the neutron star in a single mouthful, leaving no trace.

Several hypotheses have been proposed to explain the formation of mixed NSBH binaries. The first involves the evolution of a pair of stars in orbit around one another. Towards the end of their lives, one of the stars could become a black hole and the other a neutron star, while still rotating around each other. According to another hypothesis, that of dynamic interaction, the two components of the pair form independently in a very dense stellar medium before coming together. These results open up the way for the detection of other mixed binaries, as well as for the observation and understanding of extreme phenomena of a similar nature.

(1) Gravitational waves are tiny ripples in space-time and were first observed in 2015, a century after Albert Einstein predicted their existence in his General Theory of Relativity.

(2) A neutron star is the residue of the collapse of a massive star at the end of its life.

(3) The two signals have different confidence levels. Although the statistical significance of GW200105 is not very high, the shape of the signal and the parameters inferred from it point to an astrophysical origin.

About Virgo, LIGO and KAGRA

The Virgo Collaboration is currently composed of approximately 690 members from 15 countries. The European Gravitational Observatory (EGO) hosts the Virgo detector near Pisa in Italy, and is funded by the French National Centre for Scientific Research (CNRS) in France, the Istituto Nazionale di Fisica Nucleare (INFN) in Italy, and Nikhef in the Netherlands. A list of the Virgo Collaboration groups can be found at http://public.virgo-gw.eu/the-virgo-collaboration.

LIGO is funded by the National Science Foundation (NSF) and operated by Caltech and MIT, which conceived of LIGO and led the project. Financial support for the Advanced LIGO project was led by the NSF, with Germany (Max Planck Society), the UK (Science and Technology Facilities Council) and Australia (Australian Research Council-OzGrav) making significant commitments and contributions to the project. Approximately 1,300 scientists from around the world participate in the effort through the LIGO Scientific Collaboration, which includes the GEO Collaboration. A list of additional partners is available at https://my.ligo.org/census.php.

The KAGRA laser interferometer is located in Kamioka, Japan. The host institute is the Institute of Cosmic Ray Researches (ICRR) at the University of Tokyo, and the project is co-hosted by National Astronomical Observatory in Japan (NAOJ) and High Energy Accelerator Research Organization (KEK). KAGRA completed its construction in 2019 and the data taking started in February 2020 during the final stage of the run called “O3b.” KAGRA Scientific Congress is composed of over 470 members from 14 countries/regions. See: https://gwwiki.icrr.u-tokyo.ac.jp/JGWwiki/KAGRA/KSC/Researchers

The scientific article announcing this discovery is co-signed by 102 scientists in France, working in eight teams from the CNRS and associated universities, part of the Virgo Collaboration: